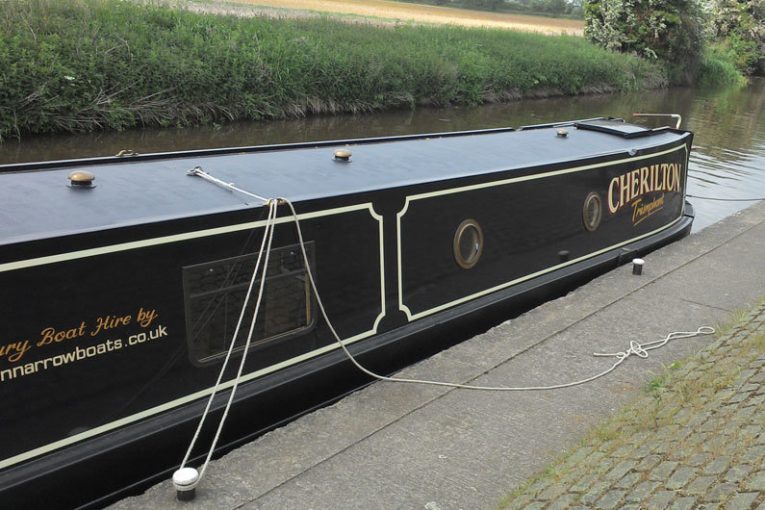 A correctly deployed narrowboat centre line can make a massive difference to your cruising pleasure and safety. Here’s why it’s so important.

The most essential piece of kit for you as a helmsman is this length of rope, fastened in the right place and always to hand.

I currently moor, and work, at Calcutt Boats on the Grand Union canal close to Napton Junction. There are 2,500 narrowboats moored within a ten-mile radius. The network’s busiest lock flight at Hillmorton is four hours cruise away. The scenery is stunning, and you can be heading in five different directions within a few hours. It’s tremendously popular with narrowboat owners, and with holiday hirers too.

Black Prince, Napton Narrowboats and Kate Boats are all within spitting distance of Calcutt. Added to Calcutt Boats’ dozen hire boats, there are one hundred craft available for hire within a tiny area. Most new hirers start their cruises on a Saturday. Summer Saturdays on the Calcutt flight of three locks are pandemonium, especially at the top of the Calcutt flight of three locks.

That’s where the inexperienced crews from both Black Prince and Napton Narrowboats often converge. And where they meet the equally clueless Calcutt Boats hirers coming up from the company wharf beneath the top lock. The descending crews are nervous because they’re approaching their first lock and petrified because this is the first time they’ve had to stop their unwieldy floating home.

A narrowboat just sixty feet long can be the temporary home for as many as eight holidaymakers. At this point in the cruise, seven of them will flow from the boat onto the towpath like lemmings. Some will leap from the bow and some from the stern and then, like opposing tug of war teams, they’ll haul on the boat’s mooring lines for all they’re worth. At the same time, the poor sod they’ve left at the helm will be revving the Morse control with one hand and aimlessly waving his tiller from side to side with the other. That’s what happens when you’re inexperienced and aren’t working as part of a team.

Sometimes, a couple pulls up on a boat behind them and shows the newbie crew how it’s done. The man at the helm – it’s nearly always a man at the helm on a flight of locks – pulls slowly to the side. His wife steps off and, without a backward glance, walks casually past the screaming hire boat crew. The man on the private boat steps off too. He holds his secret weapon, the bit of kit which enables him to handle his boat easily on his own. That’s despite his craft being even longer than the hire boaters charge.

His secret weapon is, of course, a centre line.

You cannot handle a narrowboat effectively without a centre line and, as the name implies, your line should be tied to the centre of your boat roof. I’ve seen some ropes which aren’t secured to the boat centre, often because of the boat design. A non-central centre line is better than nothing, but life is much easier if it’s fixed to the middle of your craft.

If your rope is secured to your craft’s midpoint, and if the line reaches you at the helm, you have total control.

The length of your centre line is critical too. It must be accessible to you at the helm if it’s going to be of any use. Some boaters like a long line, one which will reach past the stern. Long ropes are useful if you need to step off the back of your boat onto solid ground and then pull your craft sideways so that it’s parallel with the bank. Boaters visiting Calcutt Boats’ wharf sometimes need to do this if, for example, they want to empty their pump out toilet tanks. Reversing and pulling the boat around is much easier than coming at a concrete wall bow first and trying to judge the distance from the boat’s helm sixty or seventy feet away.

A long centre line is a double-edged sword. It’s handy if you need to step off the back of a boat, but you need to watch it like a hawk. If the line falls from your roof, it will drop into the water and head like a guided missile for your propeller. Fouling your prop in this way can be frightening, inconvenient and very expensive.

I’ve done it once. One of my Discovery Day guests actually let it slip off the roof, but it was my fault for not noticing.

The rope, draped over the end of my boat pole, fouled the propeller and instantly pulled taught. It tightened so quickly that it flipped the pole ten feet in the air. The bang of the engine stopping was followed almost immediately by the crash of the pole landing on the roof, narrowly missing one of my guests.

I was lucky. The sudden strain on the drive shaft can tear the engine from its mounting and cause extensive damage. Even though the engine wasn’t damaged, I was. On a cold February day, I had to lay face down on my back deck for half an hour with my arm up to my shoulder in icy canal water. I had to feel blindly through my weed hatch to remove a dozen iron-tight bands of 12mm rope from the propeller. I came away from the ordeal with a ruined polo shirt, a forearm rubbed raw from the abrasive weed hatch surround, and a healthy respect for centre line etiquette.

Please learn from my mistake. Watch your centre line like a hawk if its long enough to reach the back of your boat. And wear a cheap top if you need to dive down your weed hatch. Here’s a forum post with more information about centre line length.

Centre lines are not for decoration. If you leave one coiled prettily on your boat roof, you might as well throw it away. And if you have rope snagging obstacles on your roof – chimneys, poles, planks, boat hooks, wheelbarrows, potted plants etc. – make sure that you have two centre lines, one running down each side of your boat. You don’t want to step off your boat with your rope to realise that the line is caught on the wrong side of an expensive chimney. You then pull on your rope and lose your stack, or drop your line and say goodbye to your boat. Neither option is desirable, so you need to make sure that your centre lines are obstruction-free before you need to use them.

There you go. You can’t handle a narrowboat effectively without a centre line, which is a bit of a problem if you have a pram cover on your boat. You can read about that particular problem here.

Comparing A Hire Boat With A Live Aboard Narrowboat