Yesterday we, at last, managed to get together with our friend Chris whose taxi service has become our regular means of getting from Heathrow to the boat. After riding with him for a short while last year, we knew he was a special one and that we were happily moving into friendship beyond business.

Chris bought the taxi company about 10 years ago and has turned it into a thriving enterprise with nine driver’s. That said, it does not appear to be making him a fortune because each driver keeps all his fares and pays all his expenses. The former company was primarily a luxury chauffeur service, outfitted primarily with Rolls Royces. Chris now has just one Rolls which they keep for weddings,  while most driving is done my modern cars like Skoda or a large 8 passenger Vauxhall van. Chris’s clients are primarily executives visiting the UK and boaters needing rides to his friend’s Wyvern Shipping Company, a canal hireboat service in Leighton Buzzard, which is how we met last October. He does also serve as de facto chauffeur for a duke  as Chris says, “it’s “Your Grace” when he has others with him, but, when were alone, I bloody well call him Peter and he calls me Chris”).

Chris (our age) is married to Pamela (probably 10 years older than Chris and native of Zimbabwe , formerly Rhodesia). They met in the early 1980’s when she was on holiday in London and have two gorgeous daughters and two equally stunning granddaughters.

Chris and Pamela live in a modest and relatively recent (1980’s) part of the Milton Keynes in Buckinghameshire. They picked us up in his beloved Skoda sedan at the Nag’s Head Pub, near our mooring beside the church in Great Linford.

After lunch, Chris and I took their dog “Pickles” for a long circuitous walk through their neighbourhood — which, surprisingly, contained a large verdant park area and a small river winding through two small lakes constructed as part of the development, but now looking quite natural. Vestiges of the past are somehow seamlessly integrated into the modern. For example, below a primary school , the path over the river crosses a short bridge of huge flat stones dating back to Roman times.

Pickles is a Jack Russell terrier of approximately 16 years and a “rescue dog”, as I think every dog I’ve met here has been. Age notwithstanding, 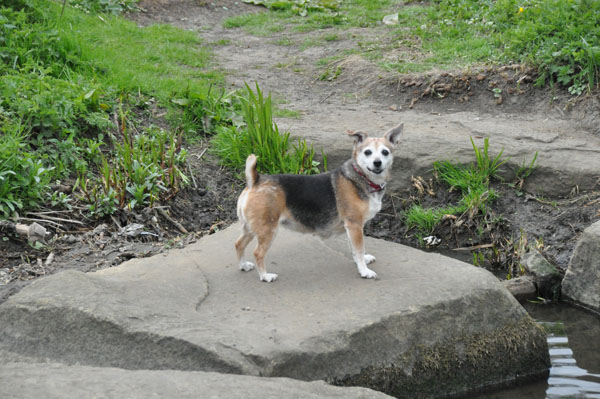 Pickles strained against her lead until we were safely across the road and into a nearby park where Chris unsnapped her lead and let her bound ahead, sniffing at mysterious scents and proving herself an indefatigable pisser equal to any male; anointing reed and bush and path and flower with quick intensity. I think, on our way back home. she was actually discovering and remaking her own “spots…”

Soon after we crossed the stones, Chris and Pickles and I met a young mahogany-skinned man and his shy pixy-like three year old daughter. Something clicked in Chris (later he said it was the man’s accent) and after the usual greetings Chris asked where the man was from. He replied “Zimbabwe, sir!” It turns out he was born in the same town as Pamela (although years apart — Pamela is in her 70’s). The man “Lukka” immediately began talking about how he longed to return to Zimbabwe and “fight for my land” saying: “the British came along and said “here’s how you can fix your problem (the end of Rhodesia and rise of Robert Mugabe): change your country — become a South African!”. So, Lukka did this and, also using the fact that his grandfather was Scottish, he and his Lithuanian wife move to the UK in 2002, where their daughter was later born.

As the daughter skipped ahead,  Lukka began talking more and more passionately about his wish to regain his land, but “look at my daughter, being in England means food for my daughter — you see sir?” I did, I I also saw with a stab of sadness that his eyes were bleary and bloodshot and that very likely he was drunk or on drugs of some sort. “If was just me I would go fight –I would fight — a man must fight for his home!! You see, sir?” he asked me.

We parted when the daughter wanted to stay and watch a pair of nesting swans by the lake while Chris and I, it turns out, had miles to go… Soon, coming toward us on the path was a colourful threesome — a fifty-ish woman, a much older woman, probably her mother,  and a Jack Russell terrier on a lead. The older woman was walking with the aid of a pair of those canes that have extensions and arm cradles for stability. At a range of about 10 yards, Pickles (not on a lead) launched forward to engage the enemy and soon the path was a chaos of noise and maneuverings as Pickles charged at the other Jack Russell — barking but not biting — and the assembled group of dogs and people began a slow circular dance of loud hostility — with Chris shouting for Pickles to “heel” meanwhile assuring the women that Pickles would do no harm — with the rival terrier’s master shouting: “Yeah — well this one will bloody well KILL your dog”. Meanwhile mother swung into action, loosing her wrist crutches and attempting to strike Pickles as our terrible ensemble rotated slowly on the path.

It was over almost as quickly as it began with Pickles being caught by Chris and snapped back onto his lead. The women collected themselves and the groups parted quickly with downward glances — not another word being spoken. In the sudden silence it was an inexplicably British moment.