We had signed up for one of the “theme nights” at “our” newly discovered local tea room “Kay’s” located in Willington — a small Derbyshire village about 20 minutes down the towpath from Mercia Marina where “Stardust” was to have her winter mooring. “Kay’s” is the epitome of a charming English tea room, run by three indefatigable and warm-hearted middle-aged sisters: Jackie, Sharon and Susie. On the Willington high street, the small white-walled shop is open seven days a week, come rain or shine or wind or sleet — or, it being England, all of the above in quick succession. 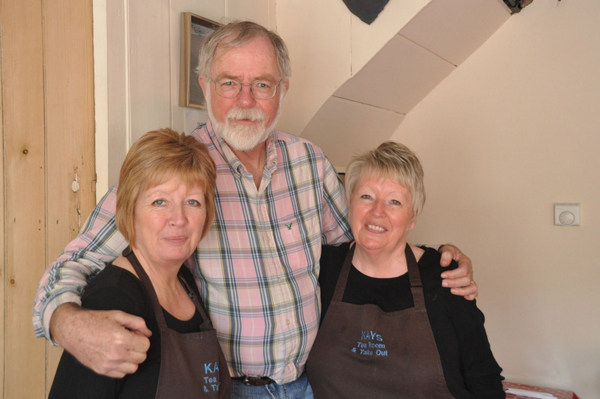 Kay’s is named for their fourth sister who died from a crippling spinal illness over forty years ago — her picture and a collection of tender and candid family photos, featuring Kay being happily wheeled about on various family outings, hang on the walls.

I think it was Mexican Night when the event in question took place — because I remember Susie appearing periodically in a serape and moustache and there was a decent quantity of excellent tequila at some point.

Valari and I had a small table in the corner — with the other tables occupied by a single woman, a couple, two other couples and, right behind us, a table of four very lively women of a certain age, including Sheila — one of the village matriarchs whose wheel-chair had been neatly tucked away in the next room.

For a long time conversation remained quiet and within the bounds of each table — to the extent that we thought: “how very British, clearly these are fine, friendly people, yet so restrained….”

But, imperceptibly, close quarters and good wine began to gently peel away the thin veneer of propriety and before long old friends were calling to and joshing each other across the room.

I was sitting closest to the next table and suddenly a very striking and handsome older woman with close cropped hair and a positively wicked gleam in her eye turned around and, addressing me calmly and directly, said (of her companions): “They’re weighing you up you know — that’s what they’re doing…” And then she turned away leaving me to ponder what exactly was included in this “weighing up” and to wonder what the result might be — especially if I was found wanting.

Before I had much time to consider my fate, Beryl, for that turned out to be her name, swivelled round again and said with that same challenging gleam: “I’ll bet it’s been a long time since you were weighed up…?”

Indeed! Well, this was more than could be passed off with a diffident “I suppose so” or “rather not I think” or some other feeble response. So, I picked up my trusty verbal racket and decided to send a scorcher straight down the centre line on Beryl’s side of the net.

“Well” I sipped my wine and responded slowly, keeping my eyes locked with hers, “it certainly has been a long time since I’ve been told that was what was going on…!”   Whereupon their table erupted in gales of laughter and calls of“he’s got you now Beryl he does, he’s got you now!”

And from that point on we were no longer strangers and thereafter always passed the time and talked of walking and the weather whenever we met at Kay’s or out on the high street.

However, back to Mexican night — making a classic beginner’s mistake, we were among the first to leave Kay’s at about 10:30 and so missed the excitement of Beryl and company wheeling Sheila out the door and, in a moment of mysterious unsteadiness, almost dumping her out on the sidewalk — and me and my camera gone but moments ago….

It was a time of beginning to find our way into the life of this small English village where so many people have lived all their lives or had gone away only to return to Willington and its close, quiet life beside the Trent and Mersey Canal.

It was a time of laughter and the pleasant discovery of new friends in the making.  Within weeks, though, our friendship with Sharon and Jackie and Susie and Beryl and Sheila and many others would dive quickly and deeply into the most intimate areas of loss and joy that life brings us.

A few days after Andrew’s suicide I went to Kay’s for a late lunch and, my face betraying too much, I could not help but tell what had happened. It was one of those moments where people either close up to you or their hearts open and, of course, they sat with me and heard the whole story and then began to talk of the loses in their own lives — the death of their mother and a close friend within a week, a husband’s suicide, the recent passing of a dear friend and, of course, the loss of their sister Kay; all those things that tear us open and say to us: “Look: I am Life and Death and I am Terrible and Beautiful!”

After that, these wonderful women were always there for me. In the same way as we hold a candle for someone stumbling darkness they knew just when to come over and share a cuppa with me or when they should just go on with work and let me slip alone into the Daily Mail, or, in real desperation, The Sun or the Mirror — and so be taken away and diverted for a few decadent minutes.

The winter days of the north Midlands shortened to almost nothing and the cold rain increased, but several times a week I, or we, were at Kay’s  — where we knew people and where we were known. And, by the coming of spring, there was laughter now and again — as there must be inside a small refuge of friends within the vast landscape of all humanity — every one, sooner or later, touched by fire.

And, as our time to leave England approached, there was the final, memorable  “Burns Night” at Kay’s — where Valari made the traditional “Address to the Haggis” and I had the high honor of plunging a large carving knife into the delicious steaming mass — and I think there was good whisky that night too…

Now we are back in Denver — drawn to help our families, touched anew by the ravening challenges of being human.

I miss each of the “Kay Sisters” every day. The home-made bread that Susie bakes and the soups and pies cooked by Sharon and Jackie are still, in my heart, only as far away as a short walk down the canal and into town for a bit of a natter with good friends.