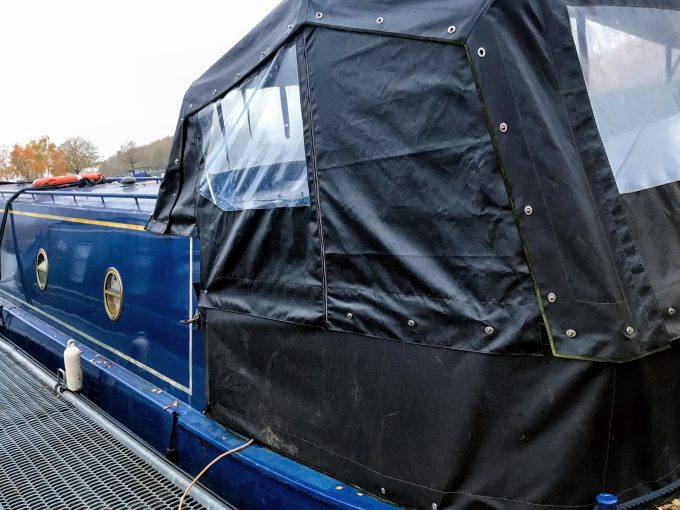 Narrowboat pram covers protect your rear deck and provide additional living and storage space, but are they a practical addition when cruising?

I have a love-hate relationship with pram covers.

I love to hate them.

In case you’re not familiar with the term, a pram cover is canvass over a steel or aluminium frame. It’s often used to protect the rear deck of a cruiser or semi-traditional stern narrowboat. I don’t think that cruisers stern boats are as practical as traditional stern craft for living aboard, but that’s a highly subjective point of view. In the interest of balance, here’s a forum post written by a liveaboard boater who adores pram covers.

Anyway, from a boat handling point of view, I think pram covers stink. That’s another subjective point of view but bear with me. I think I can justify my dislike.

I have to handle different narrowboats every day. Boats are dragged onto Calcutt Boats slipway most days, swapped with a freshly blacked boat. The painted boat has to one returned to its mooring, carefully of course, because it’s hull is sporting a flawless coating of bitumen.

Marinas are notoriously tricky for boat handling. Flat bottomed narrowboats with acres of cabin sides don’t make the task easy. Even in the slightest breeze, they skate over the water like a toy plastic duck. Add a pram cover, and you compound your problems.

The pram cover increases wind resistance. What’s more, because you’re protected from the elements, you can’t feel the wind on your face. Knowing where the wind is coming from is essential. You always want to do any delicate manoeuvring into the wind and not against it. With a pram cover protecting you from the great outdoors, you don’t have a clue what’s happening outside. In fact, quite often, you can’t see where you’re going either.

Moving a marina narrowboat fitted with a pram cover spoils my day. I know it’s not a third-world problem, but I live in paradise. Insignificant issues are all I have.

Many aspiring narrowboat owners are seduced by the thought of weather-protected cruising. “Oh, how much fun,” they think, “cruising at a warm and dry helm on a rainy day!” No standing out in the elements enduring, or enjoying, fickle nature. It’s narrowboat ownership without getting cold and wet. And it’s narrowboat cruising often filled with stress. Consider this fictitious but realistic example.

The day begins well enough. You start your engine and reverse off your mooring. Then you head for the marina entrance with a smile on your face. You’re cocooned from the elements and feel smug as you pass a poor bloke at the helm of a trad stern boat, his legs bowed under the weight of his waterlogged jacket. You’re delighted you don’t have to get THAT close to nature.

You stand under a rainproof canvas cover fitted with plastic windows. With cold rain on the outside and warm bodies and a piping hot engine inside, you have the perfect recipe for condensation. Your enjoyable cruise now becomes a constant battle to keep your view ahead mist free. You give up eventually, roll down your opaque window and let the rain in.

“Things aren’t too bad,” you reason, “I’m still protected from the nasty wet stuff falling from above.” That’s fine until you reach your first low bridge.

Your pram hood shudders and compresses as it catches the bridge arch. Under a hail of dislodged mortar, you leave the bridge behind with only your pride damaged. You were lucky this time, but what about the next bridge, and the one after that? A carefree cruise in the rain has become a wet day of worry.

You’re moving slowly, debating whether to try lowering your hood to avoid potential damage when you hear the angry tooting of a narrowboat horn behind you. You peer through the haze of condensation covering your rear window and see the bow of a boat an arm’s length from your stern. You hear an angry shout from the back of the following boat and see a figure frantically waving for you to move over.

Now that you’re out of the way, the inconvenienced boat surges past. The helmsman shouts as he passes. “What’s the matter with you?” he demands angrily. “I’ve been trying to pass you for a mile. Can’t you see out of that thing?” He waves dismissively at your stern cover and speeds ahead shaking his head. You begin to think that two thousand pounds for a rear deck cover perhaps wasn’t the best use of your hard-earned cash.

Your confidence in your new all-weather cruising companion sinks even further at your journey’s midpoint. You’ve reached the junction where you plan to turn your boat before heading back to base. You’ve done enough cruising to realise the importance of working with the wind. It’s a breezy day, and you know that you need to turn into the wind. You’ll lose control of your boat if you turn against it. Before you had your pram cover fitted, you could feel any air movement on your face. Now you can’t. The cover blocks the wind and any chance of knowing which way to go. There are no visible trees to give you an indication so, knowing that you and a fifty, fifty chance of getting it right, you turn to the left… and get blown straight into a reed bank.

With the aid of your pole and a mooring rope thrown to a passing dog walker, you manage to get your boat around and then head sadly back to your mooring. That’s where your last pram cover problem awaits you.

Before you had your pram cover fitted, you had a time tested routine for coming onto your marina mooring. The prevailing wind pushed your starboard side away from the often slippery wooden finger pier. To prevent crashing into the boat moored on your port side, you were used to steering your boat inches away from the wooden walkway. You grabbed your centre line and stepped carefully off your rear deck. Then you could hold your craft out of harm’s way while your crew secured your mooring lines. Life isn’t quite so easy now that you have a pram cover in the way.

You realise to your dismay that your centre lines are now beyond reach. Your pram cover now occupies the space where the centre lines would usually terminate. Now the only way to reach your centre line is to sidle along your gunnel like a tightrope walker over a wet and muddy safety net. The manoeuvre is made more difficult by the vertical pram cover side. There are no handholds, and the cover pushes you back over the water. Rather than step off with your centre line, you are forced to jump off the boat without it and then hope that you can dash along the pier to grab the rope off your boat roof. It’s not a bad plan, but you fail. 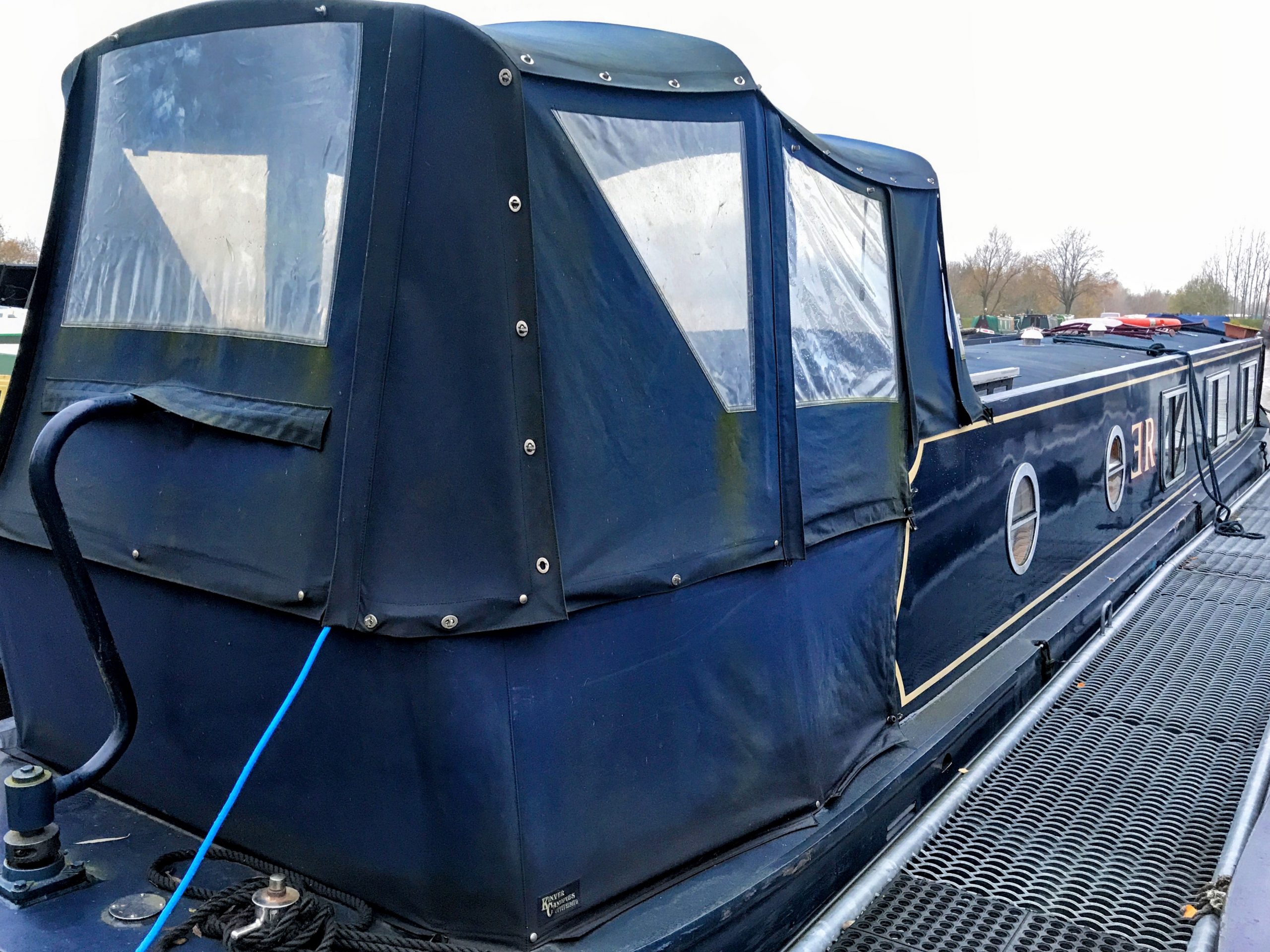 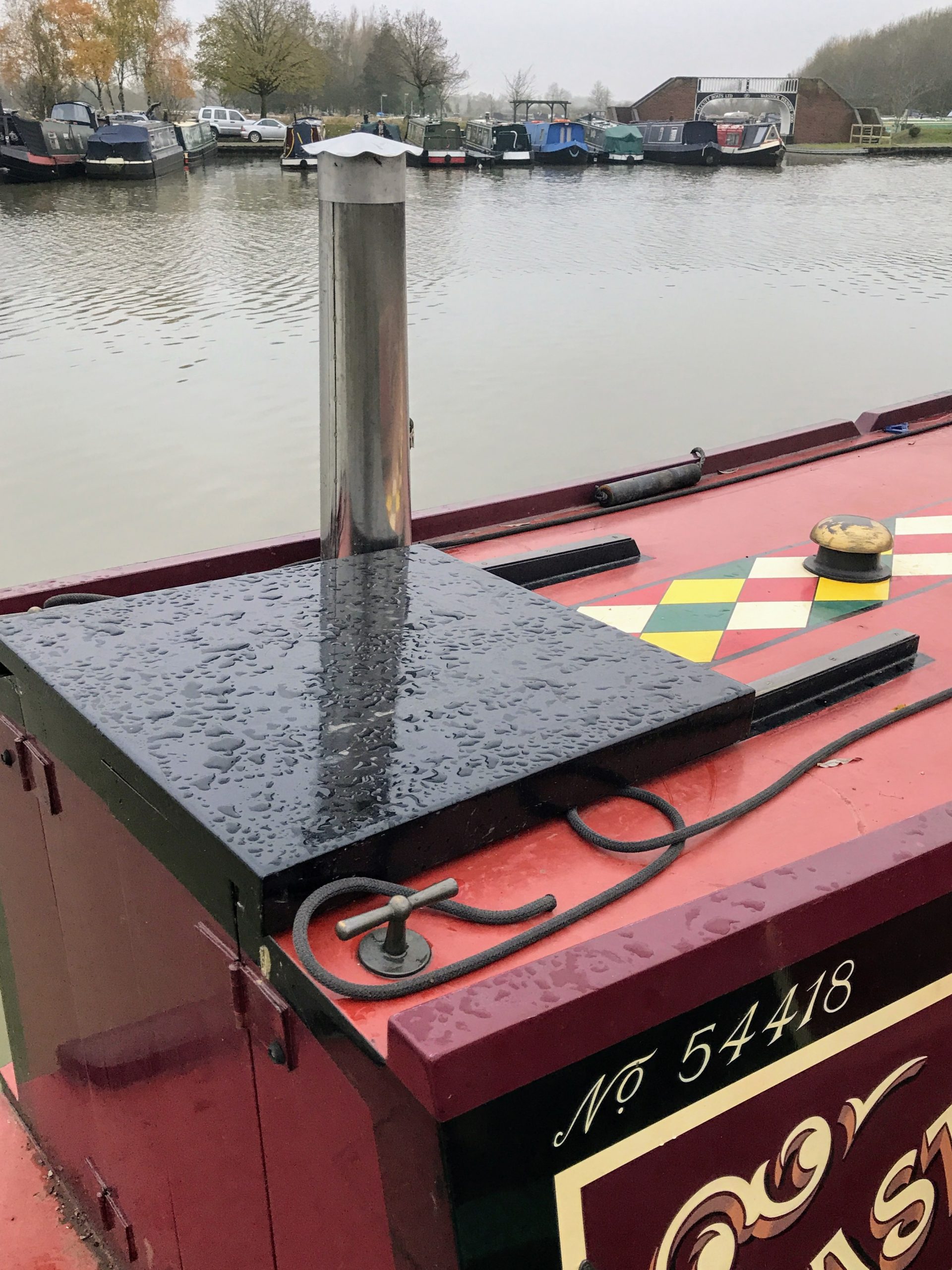 Your boat bumps gently against the pier, and you step off. Before you can reach your line, a gust blows your boat out of reach and into your neighbour’s boat, the aptly named Too Shiny For Cruising. As usual, your neighbour is leaning over his gunwale, touching up waterline scratches with an artist’s paintbrush. Twenty tonnes of steel crashing sideways into his pride and joy does not please him. Today has not been a good day.

Even though my view is subjective, many narrowboat owners feel the same. Some of the narrowboats sold at Calcutt Boats are fitted with pram covers. Their new owners often cruise the canals close to Calcutt Boats for months after moving on board. Most set off on their maiden voyages with the pram covers intact. Some are taken off after a few short weeks. I was recently given the job of moving one such boat.

A lady phoned Calcutt Boats with some tragic news. Her estranged husband purchased a narrowboat on brokerage there earlier in the year. The police called to tell her that the man had died. He’d apparently fallen off his boat and drowned. She wanted Calcutt Boats to move both his craft and car and store them at the marina.

I was asked to bring the boat back from its canalside mooring four miles away on the combined Grand Union and Oxford canal close to Braunston Junction. I wasn’t particularly looking forward to the day. Much as I enjoy taking a boat for a cruise, and getting paid for it, the untimely demise of another inland waterways boater dampened my enthusiasm. As did the memory of the times I had moved this boat earlier in the year.

Fortunately, I didn’t have the pram cover problems to deal with. The owner clearly didn’t think much of rear deck covers either. The canvas panels lay in a sodden pile on the boat roof, and the aluminium frame was folded as flat as it would go. It wasn’t flat enough to be out of harm’s way, but folded and flexible was better than fixed and in my way. My two-hour cruise back to Calcutt in light rain was far more pleasant than it would have been if I had been encased in canvas.

One final noteworthy point about my journey; if you want to enjoy quiet cruising, don’t try it on a boat fitted with a Barrus Shanks engine. At tickover, the engine sounds like an enthusiastically rattled bucket of bolts, only not quite as pleasant.

Even on a dull day, the scenery was magnificent. Sheep flecked the shoulder of a nearby hill like woolly dandruff. A buzzard circled lazily overhead, and adolescent swans effortlessly kept as I negotiated the canal’s many blind bends. I’m sure that the natural waterway sounds would have calmed me if I could have heard them over the rattling engine. I was forced to cruise at slightly less than the speed of light to avoid the annoying tickover rattle. Nature lovers, choose your engines carefully… And think long and hard about fitting a pram cover.