After dominating inland trade from about 1790 to 1840, the canals as a means of commercial transport were gradally eclipsed by the railroads until most boat traffic had ceased by the 1930’s.  Almost all working boats have now disappeared from the cut as it is called, with some few remaining to haul gravel or sand mostly over short runs. However, the rise in “leisure boating” has brought some of the old 70′ working boats back into service as travelling vendors of fuel of many varieties — coal for stoves, propane for “cookers” and diesel for engines. These fuel boats generally work a certain stretch of a particular canal and have regular customers among those live-aboards with long term moorings. Or, as in our case,  you hail a boat when we see it coming and need fuel. This particular boat travels back and forth on the Grand Union Canal from Berkhampsted to Leighton Buzzard (about 20 miles). 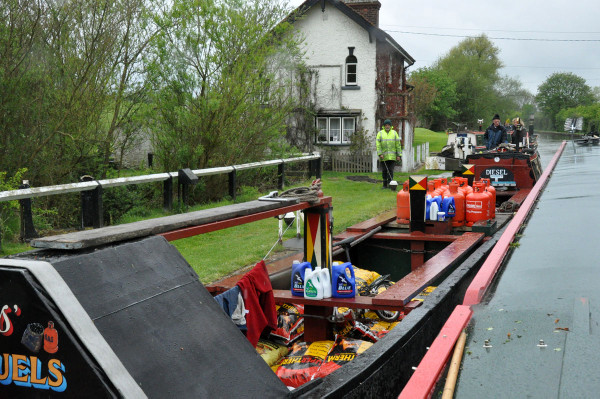 We’ve bought diesel from this crew three times now,  and so know each other by sight — and there’s now a bit of joshing — they will laugh (and make faces) and say that they will sell to Americans, but, had we been Australian, that would have been a different matter entirely….. The man making faces did so because Valari had sincerely said he looked hard working — and that was too much for him to stand for what with his mates there and all.

Today we saw the boat coming up the canal our way and waved it over. We were just about to leave a lock, so the fuel mongers told us to stay in the lock to make coming alongside easier. No boats were coming either way and this worked very well (usually the boats need to be tied together mid-canal with someone on the fuel boat keeping both craft aligned with the cut and out of shallow water).

We took on 100 litres of “red diesel” (half our capacity) and the JCC fuel boat continued along toward Leighton Buzzard as we pulled over and moored up just below a renown pub in Marsworth.