Today we happened upon a small cafe-type restaurant in    Atherstone, Staffordshire called “The Larder” — a simple store-front converted into a restaurant with an unusual theme: the life of sacrifice (that included food) experienced by most of the British during WWII. The walls are covered with old food and petrol ration cards, original and reproduced propaganda posters about Victory Gardens and so forth — while in the background play speeches by Neville Chamberlain, and then Churchill, mixed with “In the Mood” and other period songs.  The two female servers dress in period costume as well – one in tan work overalls and the other in a ruffled frock that somehow reminded me of my mother.    The menu included, but was not limited to, wartime “dishes” such as Spam Fritters and Beans – which I immediately ordered — only to find, alas, that they had run out of Spam and I had to settle for local “Bangers in a Bun”. 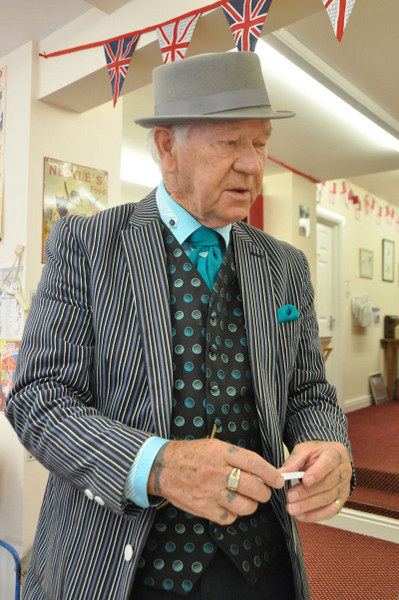 So, it is probably understandable that, initially, we mistook the eye-popping entrance of a nattily dressed older man as the arrival of some additional member of the staff. But it turned out that “Peter” was just one of the regulars at The Larder – but a regular loved by all it was clear.  He was dressed to perfection in a grey hat, striped jacket, blue trousers with turquoise socks and a well-knotted tie and handkerchief of matching color, finished off by perfect accents in his pale blue shirt. Valari got to the camera first and began quietly shooting as he fiddled with his half-hunter pocket watch and ordered a coffee.

Peter was visual richness itself – the clothes notwithstanding, there was a true sparkle in his eyes that seemed to radiate life and intelligence and that; a gleam that somehow made sense of the large but subtle diamond ring and the aging tattoos on his wrists and above the second knuckle of each finger.

It wasn’t long before he called out in our direction: “Do I detect a trans-Atlantic accent…?” and so began a long conversation,  first across the restaurant — then I took my tea over to his table and we really started in. I commented that my wife and I are both photographers and so immediately had noticed his exuberant taste in clothes — to which he responded: “It is deliberate and in a little while I will tell you in what manner it is deliberate” indicating his hat and tie.

Then began the warp and woof of a lifetime of stories including: the first anniversary of the death of his wife of 30 years and his real loss of her to Alzheimer’s over four years ago; stories about Peter’s past (born in Canada, son of an aristocrat who had run off with his mother — a domestic servant on the family estate); the British Army in Malaysia at age 18; continuing “work” in places such as Australia, South Africa, Egypt and South Yemen. “Work” that, he quietly implies, remains largely shrouded in the Official Secrets Act.

But, always the emerging narrative pattern circles back to accounts of the real and present joy in Peter’s life at age 83. “You know what happens when you dress like this? he asked. “Women notice you. In fact, they are positively enchanted by you. Therefore, I dress like this because it attracts interest — and besides it helps me do things that would get a younger chap slapped silly”.

“Such as…?” I query, genuinely almost scandalized.

“Well”, says Peter, “Let’s say that I am charmed by a young lady sales clerk who concludes our business by asking if there is anything else I would like? And I say “only your phone number”. And you know, more often than not, I get it! Then, perhaps she and I have coffee and perhaps I ask the lady if we can meet again and she says “yes” and so I suggest a short train ride, just 25 miles or so, to a town with a very fine Italian restaurant where she and I could have panna cotta – how can she resist?

I remarked that old-fashioned manners and respect appeared to also be part of his charm and success. 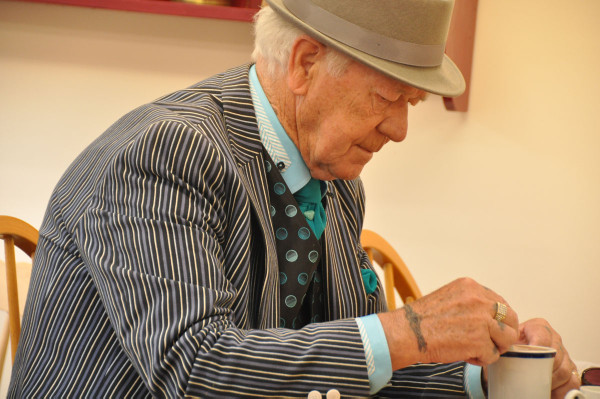 “Of course. When I was young and learning “the facts of life” my mother told me: “Peter, when you go looking for a lady friend or a wife, remember that what women most want, whether they will tell you or not, is kindness.”

“And, I find this approach does very well with women in the range of 19 to 46.”  Peter is speaking specifically here because his current “friends” include 19 year-old in Leicester and a 46 year-old in Birmingham. “Yes”, he mused “very attractive women at that…”

“And that is why the way I dress is deliberate. After all,” Peter concluded: If you’re going back into the orchard at my age — why on earth would you not pick the very best and sweetest of the apples…?”

With that, Peter graciously paid for all our lunches, picked up his silver topped cane and stepped back onto the high street.