A few months ago I wrote briefly about our encounter with an old (circa 1937) seventy-foot  working boat still on the canals — now selling diesel, propane and solid fuel to clients between Milton Keynes and Marswoth. The boat “Towcester” (pronounced “toaster”)  is owned by Jules and her husband Richard, the business being: “Jules’ Fuels”. The Towcester has a classic two-cylinder Lister diesel engine, which makes an impossible-not-to-love shucka-puppa-schuka-puppa sound as it moves along the water.

Well, last night, who should come along and moor just ahead of us but Jules and Richard and their dog “Jesse” on Towcester.  They spotted us as they were coming in and asked cheekily if dinner was ready — I shot back, “of course — and the recommended wine tonight is a nice Chablis!”

When Towcester was secured to the bank, I went over to chat and Valari surprised all of us by coming out with two glasses of Chablis for Jules and Richard. So, we sat and talked for some about the sorry state of the world, the pleasures of the canal, the joys of growing older  and how Jules and Richard came to be in this particular business. It turns out that Jules was born in the famous canal town of Stoke Bruerne, has loved boats all her life and has been living on working boats since she was thirteen. Richard has been on the cut since 1990, and so is a relative new-comer.

Now in her fifties, Jules has owned Towcester twice. As a girl, it had always her dream to own this specific boat as she watched it pass through Stoke Bruerne. She finally was able to buy the boat as a young woman — later lost it in a divorce, then found and bought it again several years ago. Recently she had the original Lister engine completely restored — and it is a thing of beauty. 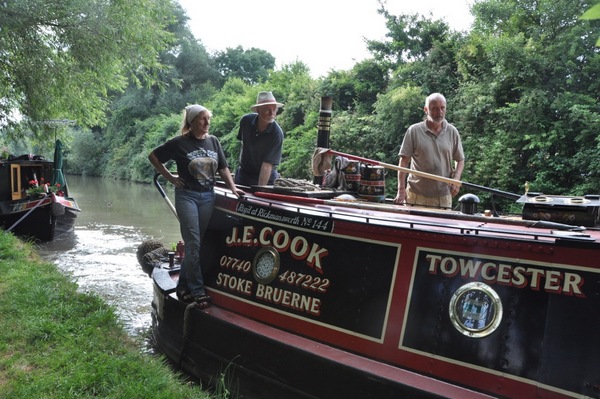 I was sitting on Towcester’s stern, admiring their boatman’s cabin, with the two metal wheels that control the engine just above my head, when I said,  almost to myself: “it must be amazing to operate a boat like this…” Richard replied: “Well, come along when we start off tomorrow and you can give it a try!”

So, this morning at about 8, under a pleasantly overcast sky and cool temperatures, Jules said, “Alright — take the stick and let’s move off”. Standing in the trad stern hatch, I clunked the left hand wheel a quarter turn anti-clockwise (putting the boat into forward gear) and gave the right hand throttle wheel a light spin or two. The Lister sped up making its glorious sound as we pulled away from the bank — with Valari on the towpath taking photos of The Departure.

As instructed, I kept Towcester dead centre in the channel — because it draws three feet of water and, whatever happened, I was determined that we would not end up on a sand bank while I was entrusted with the boat.

Stops were made to sell diesel to The Cheese Boat and deliver over a half ton of coal to live-aboard boats,  including a retired couple on “Papillion”.  Jules would take the tiller briefly to execute delicate manoeuvres coming along-side, but as we went along, I took some of this on too. I was alternately introduced to the customers as “the man in charge of coal-sack quality control” or “our Yank apprentice”.

While Jules sent texts to long-standing customers to let them know we were in the area,  Richard and I talked about the many and varied aspects of boat life past and present, his happiness in marriage with Jules, and bits of many other topics – all punctuated with occasional directions based on the nature of the channel and bridges coming up, “Try to take a line to a bridge-hole that gets your bow visible as soon as possible to any boats that might be coming the other way”, or, “don’t cut this corner — it’s deceptively shallow right there” or “watch the branches as we come in here — if we scratch the brass work on Jules’ chimney we’ll both never hear the end of it…!”.

Jules is truly a woman of the cut. She has spent her entire life on or within 2-3 miles of the canals. Richard spoke with endearing compassion of how, when they must take the car out to shop or deliver coal to a non-canal customer  “Jules’ whole face and body become a rigid expression of unhappiness — it still startles me.  But, as soon as we are back on the boat, she is immediately alive and smiling again.”

The most pleasing part of the trip was, of course, taking Towcester through the flight of three locks at Soulbury — and there we said our goodbyes until next time and I walked the 3 1/2 miles back to Stardust.

In trying to explain the experience to Valari, the best I could do was to say that it was an opportunity to briefly stop observing and actually step into the living history of the canals that Jules and Richard and “toaster”  represent.

Last night we were invited to a barbecue being put on this evening by another couple we have met here and there along the cut. So, after getting back from time with Towcester, I went down the tow path to see what might be needed that we could bring.  It turns out that the invitation must have been issued in an alcohol-fueled moment of now (completely) forgotten bon ami, as there were no chairs or place settings for us.  But, that’s another story…