Regularly every narrowboat owner is asked the question “Is your narrowboat cold in winter?” The standard response is a laugh, a smile and the assurance that the boat is toasty warm. That’s not always the case, though. Here’s what you need to know to keep you warm in winter.

Several factors dictate whether you shiver your way through a winter’s evening or strip off to your boxer shorts and throw all the doors open to let the heat out. 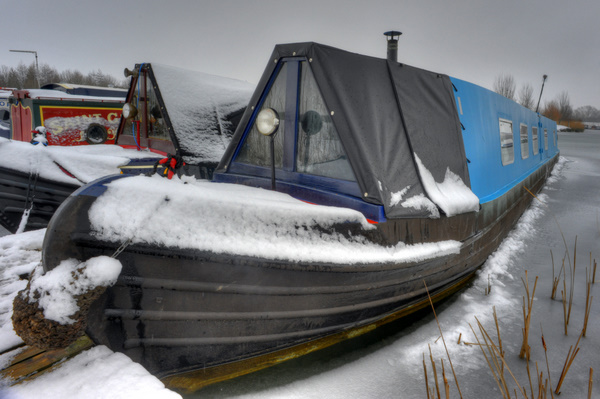 Is a narrowboat cold in winter

I have been living onboard James, pictured on its mooring at Calcutt Boats Meadows marina in early February 2012, for two years. My first winter was a baptism of fire. It was the coldest winter for 100 years. The canal and the marina were covered by four inches of ice from the last week of November 2010 to the first week of January 2011. One night I recorded a rather chilly minus eighteen outside. It was so cold that I woke up the following morning to discover a quarter an inch of frost inside the engine room (which had one poorly fitted ply panel separating it from the main bedroom where I sleep). The temperature in the bedroom was just above freezing. There was a spell when the daytime maximum was minus six. It was a cold, cold winter.

The following winter, the winter of 2011/2012, has been much more pleasant. Why? Two reasons. The winter has been relatively mild compared with last year and, more importantly, I have had some work done to the boat. James, at 35, is quite an old boat. The cabin sides and roof were Masonite, an oil-treated ply. There were four seams in the roof construction were the ply sheets joined. The seams, at some point in the boat’s history, had started to leak so had been taped over. The tape wasn’t very effective, so the seams allowed water into the cabin every time there was a heavy shower. The water would find its way through the gaps in the roof. Then it would trickle along the inside of the internal cladding before finding a weak point to drip through into the cabin. When I heard the sound of rain drumming on the roof, I would gather together a collection of pots and pans to place carefully under the drips.

In November last year, I had the opportunity to ship James off to a local boat builder to have the cabin sides and roof and the front and back doors overplated. While they were doing the work, I asked them to sandwich insulation between the old Masonite and the new steel. I used one-inch polystyrene for most of the surface area and Rockwool for the areas where they were welding. In hindsight, rather than saving a few bob by using the cheaper polystyrene, I would have used Rockwool on all surfaces as it is a more effective insulator.

The additional insulation has made a significant difference, as has the fact that the roof and cabin sides are no longer holding water for much of the time. The boat, with the same heating inside, is both warmer and less damp.

James has a solid fuel stove with a back boiler installed right at the front of the boat. The back boiler feeds three radiators along the starboard side. The furthest radiator is forty feet away in the main bedroom. The system struggles to push heat down to the far end. I can’t find out the make of the stove, but I understand that it’s as old as the hills – as old as James anyway – and isn’t very efficient.

I know several liveaboards who swear by Morso Squirrel stoves. I’ve heard stories of coal that will carry on burning for up to two days if the fire is “damped down” (has the airflow reduced, so the fuel smoulders). The longest I can achieve with the stove on James is about twelve hours.

Rather than a solid fuel stove, I could install a diesel heating system. I could then have the convenience of waking to a warm boat, but I (a) can’t afford to at the moment and (b) don’t like a lot of them because of the noise. Some (particularly the Hurricane diesel heating system we sell so successfully at Calcutt Boats) are very noisy. The Hurricane sounds like a hurricane. There is a boat moored on the opposite side of the marina from me that has one fitted. I can hear it from James.

The diesel Bubble stove is very quiet. Allan on Pengalanty has one. His boat was very cosy when I visited with hardly a sound from the stove.

There’s no point filling a bucket with water if it’s full of holes. The same applies to filling your boat with heat. Draughts can very quickly make the boat feel cold. The new steel front, rear and side doors on James weren’t a perfect fit. I’ve added ply panels to the doors’ inside faces to insulate them a little, but there’s still a bit of a draught. I’ve fitted draught excluder around the front and rear doors and the centre doors and hatches. There’s still a draught from the centre door hatch on the weather side so it can be a bit chilly there when there’s a stiff breeze.

I moor James at the western end of the marina. The prevailing wind is south-westerly and, as Calcutt Boats lays ina wind “corridor” (the old working boatmen used to refer to the pound below Calcutt Bottom Lock as “windy corner”), there’s usually a stiff breeze. The boat then is buffeted by the wind daily. On the few occasions when there is little or no wind, James feels very much warmer. Of course, the breeze always finds the draughts.

So when people ask me if a narrowboat is cold in winter, I should say, “Well, it depends on the heating system you use, how well insulated your boat is, whether you have any draughts and what the weather is like”. But I won’t. I’ll smile and assure them that I’m toasty warm. And this morning, as I write this, with an outside temperature of minus five but no wind, and the coal fire roaring, I am toasty warm.