Hi it all seemed a bit scary when I got up Sunday morning and started checking over things. Bread and a few odds n sods was all I required on the food front. Fridge and cupboards would last at least a fortnight if not more. Bag of coal, stuff for the loo and a bleed key for the radiator as I can’t find the one I’m sure is on the boat. Is there such a thing as a boat fairy which goes round removing items that you know you’ve got and can’t possibly lose as there isn’t enough space to lose things.

Anyway by about 1 pm I was ready to go and my neighbour, Keith, had topped up my water when he did his. He’s a good bloke but has this obsession with Brasso and cleaning things, but otherwise sound. 1.15 and unmoor the ropes and off we go heading for Burton. The run into Burton I’ve done a good few times so know it fairly well but passed Horninglow basin is new territory and the first lock is just round a bend and catches me a bit by surprise. A boat coming out which is good timing but I had to back up a little as I was on top of the lock before I knew it was there. Straight in and a crew waiting to come down so my first single handed lock and I didn’t have to do anything at all. Nice people and much appreciated and Dallow lock negotiated.

Onwards past Shobnall basin and my first single handed lock set in lovely fields with nothing and no one around. Branston lock is only about 5ft deep and letting the water in slowly and no problems. Once you pass under the A38 the countrside and the views open up lovely and I was most impressed when reaching Tatenhill lock which a really picturesque place. I feel anywhere from Branston lock to Tatenhill lock would be nice to moor even though you can probably here the A38 still it is very nice. Branston water park is at the side of the canal and the Bridge inn at Branston which serves pizza and pasta. There is as you progress an industrial estate on your left hand side but most of  it is cut off from view by the bushes and trees. 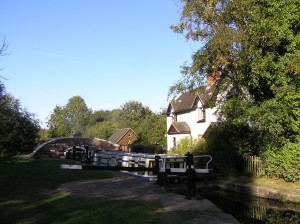 I checked the time when leaving Tatenhill lock and it was 5pm and I was undecided whether to try and get to Wychnor or Alrewas or moor up for the night. I decided after a few hundred yards to moor up and enjoy the beauty of the fading evening rather than rush about. I ended up going a bit further than I should have to moor up as I was only about 4 or 5 hundred yards from the A38 but other than that noise it was a lovely tranquil spot with a couple of other boats moored about 100yds up the canal.

About 5 hours, 3 locks and 9 miles of slaving away under a hot blazing sun I opened a bottle of Marstons English Pale Ale, which I’d put in the fridge as it was hot but I prefer my beer normally at room temp as there is more flavour, so a cool beer went down very well with a chicken and tuna fish salad and wholemeal bread cut in a couple of doorsteps. 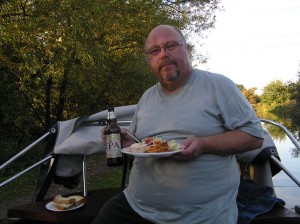 It was lovely just to sit out on the deck in my sunlounger and watch the sky fade into black star speckled night. A glass of  scotlands finest Talisker whisky and I realised I should have done this before. It will certainly be done more often next year. I talk to myself sometimes and repeated “unwind, let go, relax, enjoy” as even in a quiet place the mind still comes up with some rubbish.

A good days work all round and one happy boater.

A man who enjoys warm beer! I knew we had something in common other than loving life afloat.

Congratulations on capturing the peace and tranquility you obviously experienced. Sounds like you enjoyed the day and also the end of the day.

I did enjoy it Kim and tonight should be even quieter. Yes Paul we have proper tastes when it come to beer which as you know should be at room temp to bring out the flavours, same for cider and whisky. Mind you Paul if I had to drink lager I’d want it cold to kill the taste too. I’m afraid I’m just a snob.

Any taste is better than no taste at all. Forget the fridge, even for lager.

How long are you out for?  We may meet up as I am heading down the T&M to the Coventry.

Hi Alan I’m at Great Haywood tonight and then down through Tixall tomorrow and back to Great Haywood tomorrow night then Fradley on Thursday and maybe a little down the Coventry on Friday before heading home. I think that’s what I’m doing unless I change my mind. If I walk past you or cruise past without speaking please throw rocks or money at me to get my attention.

So long as you do not want me to throw bottles of malt!

Unfortunately it looks like I will miss you as I will probably be heading down the Coventry today – if the rain stops!