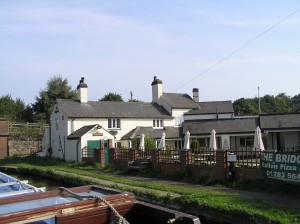 A bit chilly this morning and put the central heating on to warm things up. Quite a few boaters up and about early and not all of them very curteous as they were passind a good line of moored boats. Some of the boats and some of the people looked like they should know better. Can’t go by looks though can we? This boating is not exactly hardship avenue while out cruising is it? I sat with a coffee studying the form for todays losers at Market Rasen and Newmarket then had a long conversation with my brother on the phone. It comes under “best of both worlds” I think and I’m not knocking it.

Off we go then heading down to Branston lock. It’s certainly just a tad up from breezy I think so paying more attention. I had a good line coming in to lock mooring area behind a boat already there and just as the bow got to the bank and I started to bring the stern in the bow shot off with a mind of its own. With the bow on the other bank now I could revers and try to give myself enough room to turn and point back to where I want to go. This time with a little more force and the chap from the moored boat came and took my middle rope and we got moored up.  Another came in behind as I pulled down once the first boat went in and we all came to lift and drop paddles and things. While there a cruiser came and he had a hell of a job mooring up too. Looks like being an interesting sort of day. 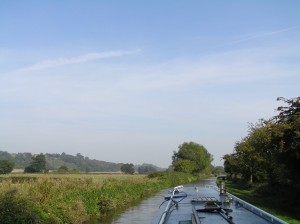 Down and then on towards Burton with fields spreading out towards the hills and then you turn a corner and a great big square wharehouse built of sheet steel, as they do nowadays, is staring back at you. Another one on the other side of canal and the A38 to pass under and we are back in Burton. As I approached Shobnall marina at a sedate pace as there were boats moored someone was coming out so I had to sound the horn as I was about 10 yards from the entrance. They did stop and so no accident.

Meandering through Burton by canal isn’t too bad as it keeps to the outskirts and goes by Shobnall fields where there were at least 3 youth football matches in progress. 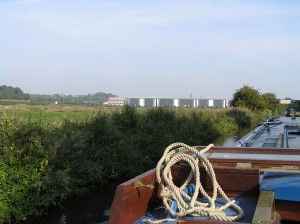 Now we come to Dallow lock which will be my last of the journey. 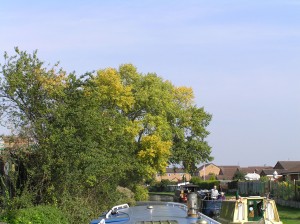 The lock was full so only had to open the gate and enter. There was a Stenson day hire boat moored right up to the lock on the downside lock landing area with three couples in and one of them fishing. I decided to just say nothing as explaining they shouldn’t moor there might get heated and I didn’t fancy the hassle. I’m a coward really. As I came back to close the gates another boat approached so I waved to see if they were going through and no response. I stood waving with both arms above my and shouting hello loudly. I figured they were going through so opened the gate I’d shut and walked back down still waving and shouting and being ignored and I was virtually back to them before they acknowledged by existence. ” oh we were looking to see if they were going through” indicating the hire boat, which is fair, but I just wish people would respond when you’re waving and shouting. It’s my age, where are my pills. 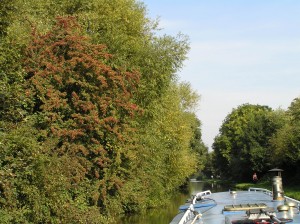 To say how windy it is today there are lots of boats out and about which makes it a bit tight in places and I slowed down and a couple of times stopped and hovered to make life easier for all of us. Would a thanks mate or  a thank you be too much to ask?

This makes up for yesterday I guess when all seemed to go right. However I passed one boat where it was narrowed by a tree and there is a very narrow bit of canal, looks like it might have been a bridge at some time, with a boat the other side of the narrow who did stop for me even though it blew him onto the wrong side of the canal and I thanked him profusely. 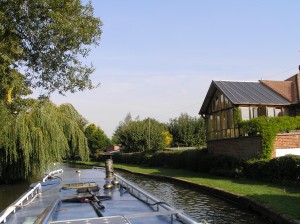 There is a narrow bridge just before you enter Willington and met two boats coming through so a bit more hovering then through and on to Willington. I had had a boat behind me for a while and he was still there as I got to the marina entrance which is tight on a good day in this direction. I had the one behind and one coming up infront and thankfully the man coming out of Mercia was stopped in  pound just after the entrance so I could turn in and only bumped once. Home or very nearly now and as I entered the marina proper you could feel the wind coming at you. I negotiated a couple of turns and ran down the farside of my bay and turned in and was doing alright till the last minute and hadn’t quite got it right so bumped my mooring partner not too bad but not as gently as I would have liked. Good job he’s a nice man. 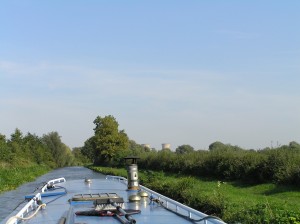 Strange really but it does feel like I’ve come home and it does feel like I’ve been on holiday and thankfully it feels like I’ve had a good time and for a weeks holiday I’ve spent nothing really. If you ignore the boat running costs which you pay anyway a holiday like this is dirt cheap. I may have spent less than normal as I moored out in the wilds four nights and after all the fresh air each day I was a sleep quite early. I should be out night clubbing till all hours when on holiday, I’m only 56 I’m still young. Ok well maybe not and maybe I’ll do the boring stuff next time too.

The last picture is a cheat I will admit as I took it one night about 2 or 3 weeks ago so it’s not actually this outing but it is taken off the back of my boat where I’m moored and so it is home. 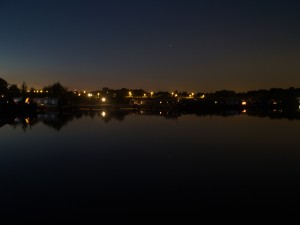 I look forward to my next outing and must post a bit more regularly than I have been doing.

Thanks for following and your comments.