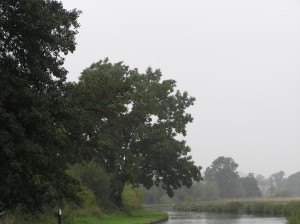 It’s been an enjoyable, funny, different sort of day today. With friends meeting me it was always going to be a round trip back to where we started kind of day. Rather overcast and drizzly which actually turned into heavy drizzle and while planning routes on the computer, I’d opened the side hatch as I like to do if I don’t think it’s cold, and looking at map books and raising a hand to passers by, as you do, and this youngish guy sort of stopped and said something about it being cold and raining and I said it didn’t seem cold and I hadn’t realised it was raining and he laughed and said it was  cold when you’d slept out all night and he walked off. I’d assumed he was a boater as he had what I thought was a carrier of rubbish in his hand. He was polite and not threatening and normally well spoken and definitely not aggressive in manner, mid twenties or early. It was seeing a few homeless folks in Leicester about 10 years ago that got me into care work, which I’ve just come out of this year, and now felt like I should have made him a coffee and had a bit of a chat but I find it daunting and while in care always worked with adults with severe learning difficulties in registered care which is a different ball game. 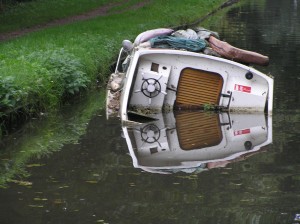 Anyway the rain had about stopped my friends were getting nearer so I got ready started her up and I has I was only just down from the lock went up to open the gates as I’d seen a boat come down but when I got there the top gates leaked so it had filled up enough for me not to be able to open the gates and I hadn’t taken my windlass with me. As I was walking back a couple of boats arrived so ended up third in the queue. Next time I will move my boat up.

Once through Haywood lock it’s only a spit up to the junction with the Staffs and Worcs and stopped and picked my friends up. It was by now about 11 am but I’d sorted a little route out so we didn’t have to rush or be travelling all the time so we set off up the Trent and Mersey. I just feel that most of the canals I’ve seen are beautiful places to be unless they are running through cities or towns and some of them are pleasantly different. Lovely reeds and trees and fields which if the sun had been out would have been  even nicer but still picturesque. 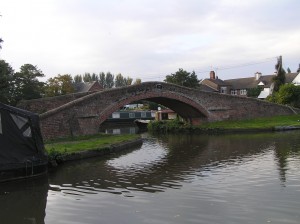 Just one lock going up, Hoo Mill lock, and I was explaining to Brian what we needed to do and a boat caught us up so after opening the gates I went back for the boat and this other chap quite happily explained and showed Brian what happens and why. There really are some nice people about, some not so nice and grumpy but we won’t dwell on them. Through the lock and more lovely open countryside. Brian was on his third cup of tea by now. Caroline his wife and me don’t really drink that much tea and coffee so we let him drink alone after the first one. under bridges 77 and 78 then wound in the winding hole and a slow trundle back down to Great Haywood and moored up so we could nip to the shop there. Be very careful with this shop as a loaf of wholemeal bread, which was all I went in for, cost me £11 odd. OK so I added two home made faggots, a bulb of garlic, about a kilo of tomatoes, a jar of Staffordshire honey and a huge two scoop ice cream waffle cone, Cherry and Passion fruit which was delicious. So if you’re passing through or near Great Haywood this canal side farm shop on Mill Lane also does a selection of fresh veg, cheeses, cooked meats, fresh meats, fresh bread, home-made cakes large and small and all as far as I know of very good quality, not cheap but not too bad. So this is place to be avoided as you will spend more than you intended unless you’re of the iron willed brigade or devoid of any taste buds. It is a diet breaking shop. 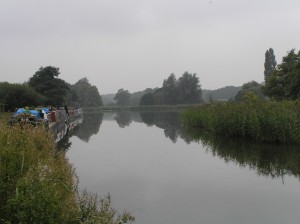 From here we had to go about 50 yards and turn right into the Staffs and Worcs canal. At the junction the T&M is very wide, the bridge is high and wide and the S&W is quite wide compared to some junctions I’ve seen and there was no wind to speak off. Don’t you feel a plonker when you miss it by a country mile and have to use reverse to get enough room to spin it round and she’s only 50 ft. Never mind I’ll get another go sometime. Over the narrow aqueduct and onto the canal proper and there on the left is an almost submerged day cruiser which would have sunk further but it was on the bottom. Does the C&RT come round and fish these boats out or are they just left there for ever. There seemed to be quite a few sunken boats around Manchester.

Down then a short distance to the Tixall wide. As we approached  there was a mooring so we took that in case there weren’t any more further down. There was a long line of boats which didn’t look to have any spaces. Popped a light under the steak and kidney in the oven and we had a walk down the wide where there were some spaces further down. It’s quite nice down there but was as stated above quite busy. 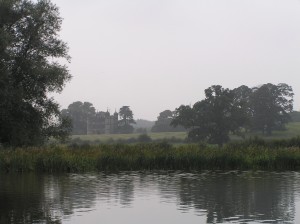 For anyone interested we only had mashed potato with our steak and kidney, whipped with butter and milk, potatoes should be just under cooked so they can be well mashed and handle the butter and milk without going gooey. Even though I say so my self it was bloody lovely and Brian and Caroline said so too. Wash the pots after a cuppa and wind round and back to Great Haywood where upon re-entering the T&M we couldn’t find anywhere to more. I hate to think what it’s like in the summer. We couldn’t find anywhere and were back at the lock near Shugborough so they walked it back to the car and I decided to go through and then find somewhere to more as there is a long stretch from the lock so shouldn’t be a problem.

As I moored up the boat to go back and close the gates I saw the same guy from this morning sitting on bench seat a bit down the canal so after I’d been thinking about it part of the day I was now faced with a dilemma. I could just have ignored him and trundled off down the canal. I could have stopped and offered him a drink and a chat, which I’m not sure I was ready for so I took the easier option of greeting him and asking if he had any money, which he hadn’t, so gave him a few pounds and though he seemed like he  would welcome a bit of time and a chat as much as the money I said see ya and moved off. A chat would have been good for him I think. I need to look into doing a bit of voluntary work somewhere now I’m not in care. All this philosophical stuff is for my benefit and can be ignored by the reader if you wish to. It does show that we all come from many walks of life and the canals and surrounding areas contain life in all its diverse and many coloured facets. Sometimes you get a second chance to make a bit of difference to someone this was a very quick second chance. 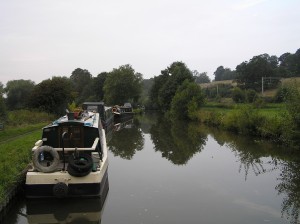 The light beginning to fade as I neared Colwich lock and found a nice place to moor up among a few other boats. Might be a bit close to the train line  but should be OK. Nice aspect out over the fields. A couple of glasses of Scottish flavoured water and lost internet connection so that’s why I’m finishing this off this morning. I did sleep well.

May God bless you all and lead you into places where you’ve always wanted to go, really.

Have a great day and I’ll see you tonight.