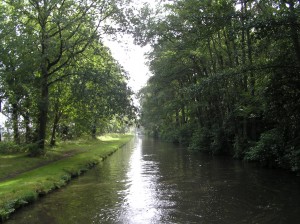 I jumped out of bed at the crack of 8.40 to the sound of absolutely nothing, well pretty close I could hear the sound of a few birds singing but basically nothing else.  I thought about what I needed to do today and decided I would get the steak and kidney into the oven before I had my coffee. Frying pan with a touch of olive oil, she has a lovely touch, steak and kidney in followed after about ten mins by a couple of onions and good dollop of ground cinamon which really does go well with meat of anykind and is vastly underused in main courses in my opinion. 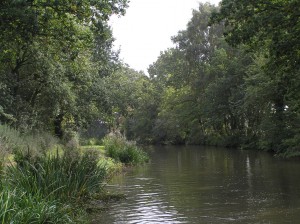 A little further up.

Tin of chopped toms into casserole type dish with a bit of original bisto a good dose of mixed  herbs and bucket full of mushrooms. Once the meat and onions browned up, I left them for about a half hour, then into pot and stuff it in the oven on a very low light.

Breakfast consisted of milky coffee and a nectarine cut into pieces then covered in proper greeek yoghurt and a couple of teaspoons of honey drizzled in. I only used drizzle to make me sound posh. I put this information in so those considering a narrowboat life realise how basic and hungry a life it can be when out on the cut.

I struggled to get moving this morning after breakfast and it was 10.40 before I got my shoes on and about 11.15 when I weighed the anchor, 4st 6lb, and set out for Great Haywood. The woods looked lovely as the sun started to break through as I cast off and I counted my blessings as the trees and ferns and fields slowly drifted by. I love trees and the greenery so it really was a pleasure to just be slowly cruising through and even when reaching Handsacre and the scenery changed it was still wonderful. 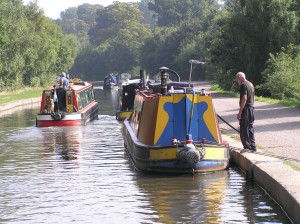 Then Armitage Where the canal seems to sit in a large concrete chanel with alotments by the side, the Plumpudding pub and then the Armitage tunnel which has no roof. Once through the tunnel there is a long stretch of private moorings on the left and good moorings on the right, the canal is quite wide here and at the bottom of this stretch is a water point which I moored up at as I’d had my monthly shower this morning while I had hot water. I made a phone call to see if a couple of my friends where still joining me tomorrow and they still are so I will have crew. 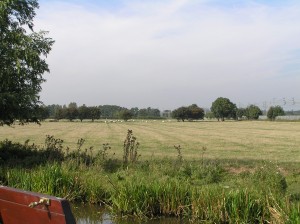 Setting off again there is a bridge and a very sharp bend into it and a pub on the left as you go through which I think is called the Ash treee and looked nice and family friendly. Brereton and Rugely centre are pleasent to pass through with just a brief spell behind a factory, which seemed to be still working, and a little industrial estate with overgrown sides which hid some of it then a stretch with plenty of moorings which today were just about all taken and as I came to  a bridge another boat was coming under and he pulled over and waited as it would have been tight as I was passing moored boats, many thanks. 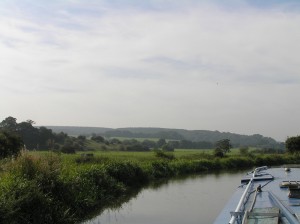 This part of Rugeley has a Tesco’s and Asda I think it is in easy walking distance from the moorings.  After this section there is a graveyard and then the canal becomes a bit more picturesque as the nice houses run down to the canal with the tended gardens and an occassional boat moored at the end of. I think it a little strange that more of these houses don’t have boats of some description when they have a mooring, if only a dinghy.

Out of Rugeley via a 90 degree turn onto an aqueduct, a real one over a real river, the Trent. A bit of a straight then a sharp left then under a bridge and after trees and woods and town the view changes dramatically into open countrside with sheep grazing on the right and Cannock Chase on the left, I believe. 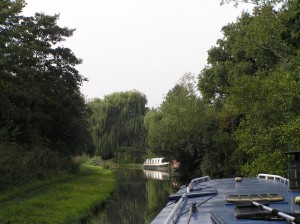 The sun is still shining and I decide to stop and have a coffee. The canal here isn’t overly wide and has reeds and rushes either side with every now and then a small piece of cut grass with about 60ft or so of armco so having missed a couple as you have to look out for them I managed to tie up in the middle of  nowhere again. Remembering the tips on mooring up so the boat doesn’t move I tied up properly behind and before which I’m glad I did as there werer a few boats that passed at a little more than I think they should have. I had to kick one of my armco mooring pins a few times before I could free it when I left as it had been pulled very tight. I didn’t shout or yell at anyone as I didn’t really think it would do any good and would have got me wound up if anything. 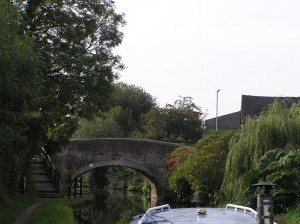 After coffee I set off again with just a couple of miles to do get to Great Haywood with the intention of mooring just before the lock. Plenty of traffic about but a lovely pleasurable journey and came into Colwich,

some lovely properties overlooking the canal and some marvelous Weeping Willows, and so to Colwich lock with a boat coming out as I got there so straight in. No ladder near me so I’d climbed onto the roof before realising I hadn’t got my windlass. Back down and a kind lady with two children asked if I need any help. I thanked her but said I was ok and after shutting the gates two chaps came up from a boat behind me they opened the paddles and the gate for me, thanks muchly gents.

I offered the lady and her children a lift which she declined as she didn’t know me, I had thought about this before offering but thought I would anyway.

It made me think about how we view the world around us these days and I certainly understand her decision as I’m not the prettiest of chaps and I think twice sometimes about offering and sometimes about who you may be talking to when you don’t know them. 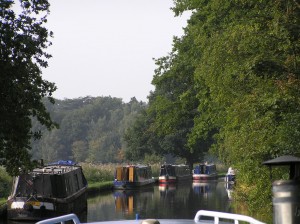 Anyway through the lock round the corner or a few corners actually and Shugborough Hall in site and a mooring a couple down from the lock. I think it’s pretty close to where we moored when I fetched the boat down from Manchester. All moored up and deciding whether to try one of the pubs for tonights dinner or eat in, the steak and kidney is planned for tomorrow as it tastes better when left till the day after.

I have now returned from the Clifford Arms having had steak and mushroom pudding with side salad, chips and peas. There is something about this pub, I visited it when we were bringing Forty Winks down to Mercia and I wasn’t struck with it then. 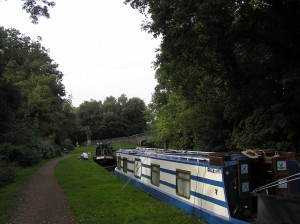 Another lovely day in which I’ve travelled about 11 miles and only done one lock and I’m not sure but probably not much over about 4 hours cruising. Some folks are just bone idle. If I didn’t know better I’d think I was on holiday.

Now it’s getting late and I need my beauty sleep. It’s after 9.30 and thinking of time and naughtical things. As you’re not supposed to drink till the sun is over the yard arm. What time is the yard arm and does it count if I make my yard arm as low as possible?

Another great post Nige. I’m not sure whether this is a cookery programme or a narrowboat cruise blog, but you’ve got my mouth watering!

Cannock Chase is well worth a visit, but you must buy yourself a dog first. There are miles and miles of tranquil walks through forest and heath. There’s a gorgeous 20km circular walk which we took the dogs on last year. We hoped to wear them out: we walked 20km, they ran 50km, but when we arrived back at the marina they wanted to go for another walk. That’s spaniels for you.

You’ve picked a great week for your cruise. There’s another dry, warm and mostly sunny day forecast for today. Enjoy it!

When I travelled up that way last March I could not believe how many lovely, unoccupied, end of garden moorings there were.  Very sad and how I would love to be able to afford one of them!

Loving your posts and may have to delay my journey if that steak & kidney is not polished off!