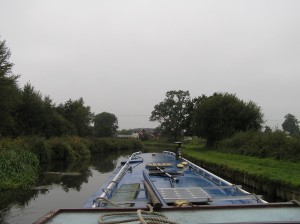 A rather drizzly start to the day along with the noise of the gravel pit behind me starting the monday morning shift so I’m awake quite early. A cup of milky coffee to get the system going and before I know what’s happening I’m setting off at about 8.15 and was gentle past the other boats moored, just read the courtesy post, and then down to my first lock of the day Barton Turns with the pub of the same name beside it and a couple of miles along side the A38. Might be 20 yards away so not the nicest part of the canal but that’s how it is untill it brings you to Wychnor bridges lock where the canal turns off from the A38. There seems to be quite a few boats about this morning and moving early so others are there and helping me on my merry way. 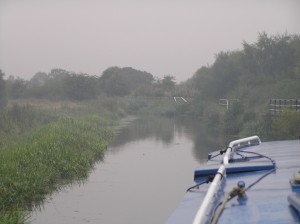 Up through Wychnor and then onto the river section at Alrewas as the canal uses about 100 yards of the river Trent and can be unusable when the Trent is in flood but open as normal today so no problems. and moor up and help with a paddle as someone is coming down.

Now we move onto Alrewas a nice little place from the canal and not too bad to drive through either. I’ve had the pubs here recommended to me but haven’t sampled their wares yet myself.

Another lock and I think this was the one were the ladder wasn’t at either end but in the middle. Oh dear thought I, I’m not exactly built or happy climbing, I’m going to have to get on the roof so the little step on the side and holding the hand rail and then on my knees and up we got and while it may not have been elegant it was at least done with no damage to me or boat and moored up for lunch and posted yesterdays blog. It was nice and peaceful so I had a couple of hours all together and considered stopping there for the night but it was only 1 o’clock so I thought I’d go a little further.

I was only a short distance from Fradley junction and a kind chap who was filling with water at the lock mooring waved me straight in and I didn’t have to do anything, many thanks. The next lock had the ladder in the middle again so more climbing, I’m getting better at it, and there was a volunteer lock man on this lock. It appears that they have volunteers, I assume through the C&RT at a few places from what he was saying and there were volunteers on the next two also but not on the last one. Only had to do one lock out of a flight of five seems like a fair deal to me.

From Fradley the canal is quite wooded which makes it look so beautiful even if it is a bit of a problem when branches hang over the canal. Woods and fields and then a small rise lock and round the bend was Ravenshaw wood where because of it’s solitude I’ve decided to stay the night. It will get very dark later but very little road noise and plenty of bird song. 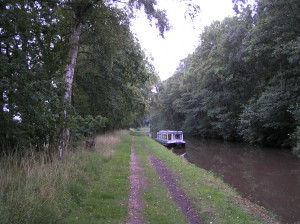 Nearest house is a farm about 1/2 a mile away. Loads of Oak trees even if they aren’t two hundred years old they still stand about 30 foot high and are dropping acorns so I must remember that if I start to hear noises in the night.

The weather started drizzly but has warmed up in the afternoon and another good day has been had with plenty of help and friendly people to talk to as I’ve passed through. I’ve learned some more things about single handing like how the  water drags the boat forward too quickly if you open the ground paddle too much too soon. How to climb on my roof and to take the windscreen off when travelling singlehanded as it gets in the way a little if you have to climb. This time when I moored up I had a small glass of Fettercairn whisky to signal the end of the travelling day even though it was only 4 o’clock. 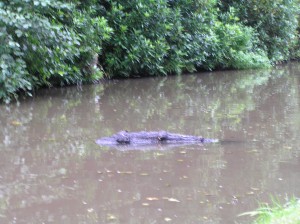 Oh and I have a question but I don’t want people to think I’m a bit of a wimp but are there any fairly large crocodiles in the Trent and Mersey? Just asking like.

Todays stats are 7 miles, 11 locks in about 5 to 6 hours actual travelling time. Photos are Top; heading for Wychnor. Right; misty just before river section. Left; and Right; Common lock between Alrewas and Fradley. Left; my mooring for the night. Centre one unidentified swimming object.

Bon voyage me hearties till tomorrow.

Definitely a croc, probably a saltie. You need to be careful. The Trent & Mersey is well renowned for them. They’ve been known to bite a narrowboat in half (and they’re particularly fond of men of a certain age who smell of real ale).

Don’t worry about the crocs, you wait until you get to the Black Country the cuts full of whales!

Great posts… after a long long day at the mercy of the Metro and then the Eurostar and then worst still the east coast mainline, your travels sound so so much better than mine. I feel relaxed just reading it !!!

How I long to be back onboard at 4kts max.

And how nice to read of a boat that is properly designed… clearly plenty of space for the whisky collection.

In your honour I am now raising a ‘not too small’ glass of laphroaig.

BTW.. how long are you out there solo ??

With your collection of whiskies I think we have to meet up Nige!

Glad you are enjoying.

Re single handing do you know to open the ground paddle on the same side of the boat first – usually!  The two locks up from Shardlow are two of the exceptions.

Laphroig is a fine tipple and I’m glad I’m helping you relax along with the whisky. I should be home at Mercia Saturday or Sunday and I’m afraid Alan my whisky collection doesn’t last very long so I have to keep replenishing it. I also have a few good beers and some very nice cider. I have a strange friend, mind you most of my friends are strange, who buys lots of obscure and different whiskys and even a few limited additions but doesn’t drink them. What is the point of a collection like that? He says they’re for his funeral but me and his good lady are planning to hijack the collection when he dies and give all the mourners Bells or Teachers and keep the good stuff back. My you if he keeps buying many more he coudl meet with an unfortunate accident.

Unfortunately I discovered the whisky shop in Skipton with over 1000 malts – the owner reckons he has 3 times that at home.  The wallet was considerably lighter when I left!  Strictly rationed but someone must be sneaking in as the levels keep going down!

Tell your friend’s wife to go for a divorce and she will get half the collection – go for the bottom half!