Hi anyone. All the blogs should now have photos. I think I’ve found a cure but it hasn’t solved the problem. The last 2 days I put captions on the 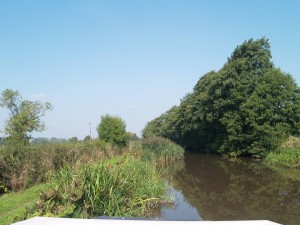 photos and it wouldn’t show them. So I took them off. Today has been a belter of a day. Wall to wall sunshine a little hazy but that stopped it burning so much. It’s now nearly 6 o’clock and it’s still lovely and warm. A lot of traffic today and a few of us were wondering if it is because the school kids have gone back and everyone is rejoicing. I’ve only done 3 locks today and have queued at them all. 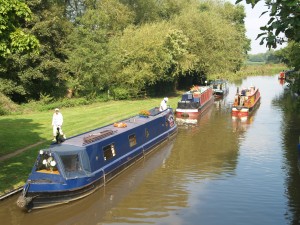 I actually managed to get moving before noon today. I think it was about 11 o’clock when I set out. Hoo Mill lock was a bit further than I thought it would be and rounding the corner I found someone waiting. There isn’t a lot of mooring there, about a boat and a half so I hovered for a little while before I could moor up and join in the fun. Someone right behind me once I did get it. All good kind folks and after a bit of a wait I continued on my way and enjoyed the warm sunshine. Moored up at Great Haywood and set off with rubbish in hand and a shopping bag. Rubbish dropped off now to find more supplies. I like the worst bits of meat really but like only the best so I had a couple of their own home made faggots, 3 links of their own cumberland sausage, mushrooms and a fresh wholemeal loaf, oh I nearly forgot  I had one of their pork and shropshire blue sausage rolls which I had for lunch and it was delicious.

Now the days acrobatics and excitement. I moved down a hundred yards to the water tap. I decided not to spin round and moor with water cap 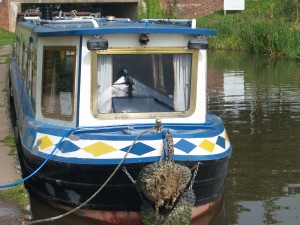 to the bank but manage with it on the canal side of the boat. I have 2 pieces of flat hose for watering 1 short one and 1 longer one but I still had to pull the boat back a little from  where I had first moored. It is also very warm and I’m sweating like a garden hose to be polite. Anyway moved it back and the long one just about reached. Removing the cap was a little problem holding on with one hand while bending down and unscrewing with the other hand. I’m not as yound and agile as I used to be but the job was done. Now to get the hose in the top and do I switch it on first or not. If I put it in and turn it on and it flies all over and goes in the canal not very good or hygienic so I thought I would try it with the water on. Now if you’ve used a flat hose before you will know they tend to do a fair impression of an angry cobra doing a jig and it was nearly in then lept out then one side then shot over the other then miracles of miracles it went in and stayed in. Hooray, for Hollywood. 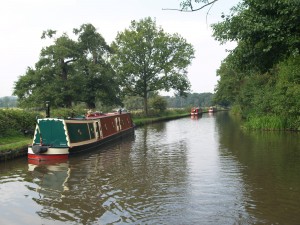 I have a list now from this holiday so far of things to get or things to do or organise ready for my trips out next year. A proper hose on a real is on this list a long with a pole and plank rack and a few other things to help keep the roof tidy. I managed not to fall in the canal either when I put the water cap back in place. 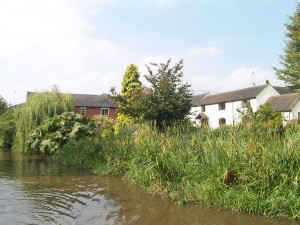 Shugborough lock. I have to hover again as I’m fourth in the queue. It isn’t particularly breezy so it isn’t a problem. Now we all know there are some grumpy people about but these were all good folks and made it a pleasure to pass the time of day with them while we all waited and worked together. This applied to those in front of me and those coming up behind who would wait a little longer. The day was enhanced rather than detracted from by this. Through Shugborough lock and off into the great wide open all the way to Colwich lock where we all met up again and did the same once more.

This would be most peoples last lock for the day that I’d met as I was hoping to moor up before Rugeley. The two boats in front of me were heading for Rugeley and they were son and wife in one boat and mother and father in the other, they weren’t live aboards so had bought two boats that fit in one lock at the same time. Saves time when your out cruising together. Very clever my dear Sherlock. The couple behind were heading for the Plum Pudding as they eat there whenever they are this way. Another recommendation for their Italian cuisine.

I chugged off again thanking all of them for their help and hoping they had a great time.

The sun was still shining and still nice and warm I cruised up through bridge 70 where there are some good moorings and took the first of the three single moorings just up from there. It gives you more of a feeling of solitude. Lovely views and the evening sun shines on you till it finally retires for the day.

I have sat and done my blog after dining early today at 5 o’clock. I had the same as I did 2 days ago to finish the bacon. Real bacon, real free range egg with mushrooms and tomatoes. I did get my egg to perfection this time as I managed to poach it spot in. All the white cooked and the yolk runny so you can dip your bread in it and the tomatoes run in with the yolk and make it perfick.

I’ve no doubt that a glass of fine cider and a tot of the finest of whiskies, Talisker, may accompany my reading or guitar playing later after watching the sun go down. Tomorrow will no doubt bring something else of interest and value.

Remember we are all like narrowboats. We cannot be guided if we’re not moving forward, even if only slowly. 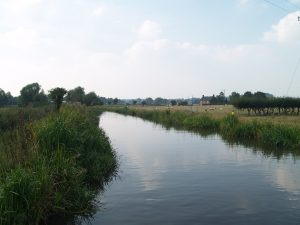 May your God go with you.

Photos; 1. Morning from the back of the boat.  2. Great Haywood moorings opposite the canal side farm shop and cafe.  3. the flat hose running across the front of the boat. Sorry I couldn’t dangle there removing the cap and taking a photo at the same time.  4. The view back up towards Shugborough lock.  5. A house with the largest rhubarb I’ve ever seen.       6. Some of the good folk I’ve met today who helped me and each other.   7. I just thought it had charm. I hope it didn’t empathise with me as it felt it had met a kindred spirit or I might not be in as good health as I think.  8. My mooring for the evening.