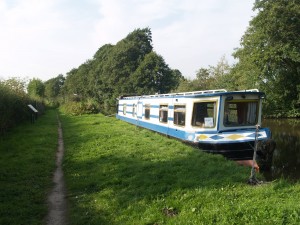 Good evening to you all. The sun is still burning the sky but I’m moored up by 17 o’clock as I want  a bit of time to myself. I’m very selfish like that. I am in the middle of nowhere or it feels like that but after mooring up a man came past with his dog and then I spotted an articulated lorry followed by a car then followed by a bread van. These were about 50 yds away and now I have another boat mooring up with me. Bugger. I’m not really unsociable just fancied a night of total solitude. I shall try for that tomorrow then. 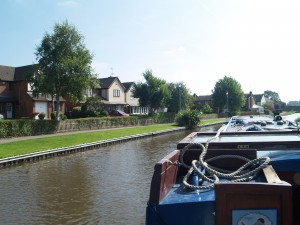 I rose about 8 am and cheese on toast and coffee for breakfast. Had a walk into Stone as I’d spotted a shop with the title Yesterdays and a few bits in the window looked OK. I had a look in some of the other shops and then went back and treated my self to a wooden fruit bowl, a knife and spoon, 3 DVDs about or taken from the Hubble telescope, I hope they are good and I couldn’t resist a DVD with 1 episode of The Prisoner starring Patrick McGowan. I know how to push the boat out. £8.50. 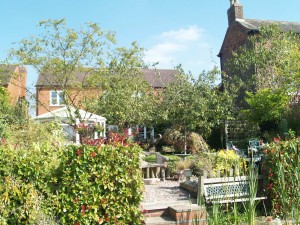 want somewhere pleasant down by the water and not unpleasant in the town part. Shops Banks and plenty of Italian restaurants. I wonder if this is a feature of the area as there seem more where I’ve moored up since up Great Haywood, Stone way than there is Derbyshire way where it seems more Indian restaurants. Choice is always good. On the way out of Stone there are a lot of properties that look out or back onto the canal and mostly modern with a few nicer older properties so those who prefer the land and can afford the prices can have nice home too. 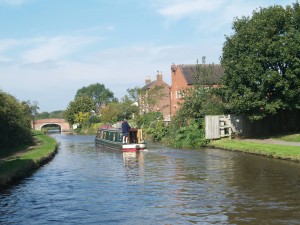 Some one coming up as get to the first lock of the day and when negotiating coming out I leave the boat in the mouth of the lock and nip up the stairs to close the gates, keeping an eye on the boat let me tell you as this, for me anyway, is a daring new adventure as I’ve always moored up and walked back to shut the gates. This is so much quicker. My first attempt going down which means you have to climb steps so are away from your boat. I did use this as well when I was coming up the locks and it works a treat but you are much closer to the boat if anything were to happen. 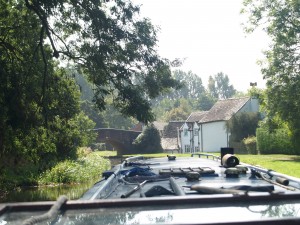 of canal down through Burston where there is a sign on the bridge advertising the Greyhound Pub then on again on again to Sandon lock which at the moment has a damaged bottom gate paddle so looks like it’s open even when it isn’t. It will still fill enough to let the top gate open properly. The gear mechanism on the damaged paddle works OK. Help again from some really nice people. There are some idiots and grumpy bums about but generally many more good people than bad I would have to say. 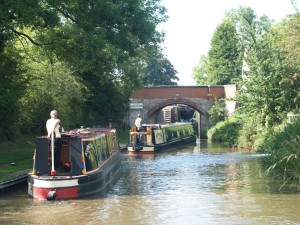 Lovely scenery as there is mostly and heading for Weston on Trent where I was half thinking of mooring up for the night. There are some decent moorings top side of Bridge 81 and a couple of gorgeous moorings between 81 and 80 which I managed to hesitate over as I was trying to take a photo at the same time and missed them, sod, and comfy walking distance to the Saracen’s head too. I’m a bit of a f…..ool sometimes. I was going to say fart but thought it might be too rude for the boating community. There are some more moorings bottom side of bridge 80 but no room was to be had so I soldiered on. 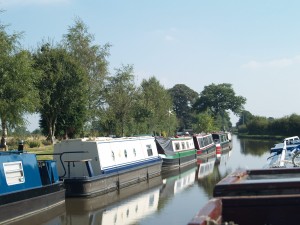 drop as there were 2 waiting to come up so caught the next one and had a chat with some people from Langley Mill and some from Shardlow. They helped me through so again an easy day. Now I’m looking at bit more earnestly for a mooring but some which looked OK only had wood and I was feeling idle and wanted armco to save using the hammer.  I meandered along taking the odd photo and keeping a look out and then I found a guy pulling off a mooring opposite a line of trees, deserted and armco and rings set in concrete. The sun shining on the bit I was about to moor up on so what could be better. Moored up and looked around, not a soul in sight and you remember the rest from the beginning of this blog 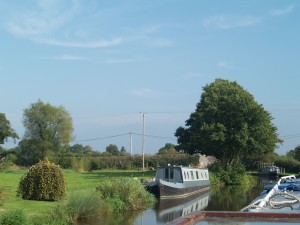 and now there are a line of 4 boats. Well if I’m honest it’s not my canal and I’ve only paid about the same as everyone else and it isn’t like it’s intrusive or any of them are making a great deal of noise. I’ve just had a good listen as I write this and I can’t really hear any of them at all and 4 of them are out BBQing.

There has been quite a lot of traffic passing between 5 pm when I moored up and now which is 7.20 although it has dropped off. There are a few clouds drifting over and the sun is slowly sinking. No fabulous sunset to 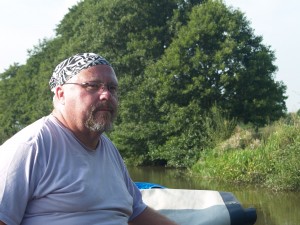 take pics of but it’s been another great day and I’m fair dinkum tired Bruce. My plan for tomorrow is to try and move a little earlier and call at Great Haywood’s canal side farm shop then hope to find one of the three moorings on the edge of Cannock Chase and have 2 nights there so I can have a leisurely day and get a few songs recorded so I can put them on my YouTube site. This site has 2 of my own songs on already with a slide show background making it like a video so if you want to have a look then go to YouTube obviously and type in OurNige and the songs are called Sometimes and The Emptiness. More will follow once I can get them recorded then put the photos to them which also take a bit of time.

Any way it’s getting near to bed time so I shall go lay my weary head down.

I usually manage to jump off and shut the gate but always take the centre rope off, just in case – guess what happened the first time I did not bother with the centre rope!!!!!!