of thick sliced smoked bacon, this butcher, Parr’s in Sutton in Ashfield, smokes it himself and it doesn’t produce white gobbets of water when it’s grilled or shrink hardly as it hasn’t been pumped with water in the first place. A friend I know keeps his own chickens so my egg was truly free range and rather delicious, grilled mushrooms and smothered with chopped toms with cinnamon, mint, and Italian seasoning. The hardships I have to endure in my quest for simplicity. Oh and a couple of slices of wholemeal bread and some brown sauce.

Right then. Where were we. I didn’t surface till gone 9 o’clock this morning and a light breakfast and a coffee and took my rubbish down to the bins for boaters near the Anglo-Welsh boatyard. Steadily got myself organised. Dropped my pram-hood. Another benefit of which when out cruising is a little extra security, sort of. I know it doesn’t stop anyone but with the hood up and putting the side nearest the tow path in place it gives a bit more privacy people can’t see everything I’ve got lurking under my seat. 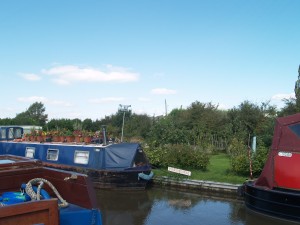 The sun is beating down and the forecast is for the same all day and tomorrow then dry and warm but a bit cloudy till at least Thursday. I hope you all appreciate the suffering I’m enduring just to bring this scintillating report to your breakfast/supper table. Sun cream applied, bandanna secured, camera in place and a bottle of coke at hand we are ready to depart. So of we jolly well go. Plenty of private moorings along side the canal at Great Haywood so a while admiring or wondering at the condition of some then the moorings stop once you pass the entrance to the marina and it becomes more at peace with reeds, trees and rushes. Then Hoo Mill lock appears. Someone comes out so I go in and someone waiting to come down so I don’t have to do anything at all to get through the lock apart from thank this wonderful couple for the help they’ve given. 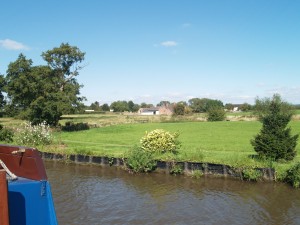 sunshine. There is a noticeable breeze though which does affect you occasionally but no real hardship. A lot of wonderful open country side to travel through and some interesting and lovely houses to add variety to the journey. Weston lock then Weston on Trent which looks a nice small village and then a line of beautifully situated moorings. They may not have all the facilities but they do have the outlook. Turned the corner and a row of about 20 or so anglers. I thanked most of them as I went past very slowly. Some spoke, some were pleasant and none were rude. Boaters and fishermen have to learn to get along as in the end we need each other to keep the canals and rivers in the best condition for all of us to continue to enjoy. 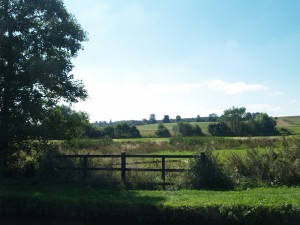 Now Sandon lock. Oh a bit of good fortune for me again as at the last lock and again here the boat behind as caught me up helped me through the locks so I’m still not doing them on my own really. In fact I’ve hardly done any in the 6 days I’ve been out. Again nice people. Many, many thanks. The country side rolls on as do the miles and the sun keeps beating down and I apply more sun cream to the side of my face which now feels a little hot under the continuous sun. We of the Cloud Appreciation Society see the benefits of our friends the clouds not just to add beauty to a dull all blue sky but a little respite from the blazing sun we continually get in the summer. ?????? 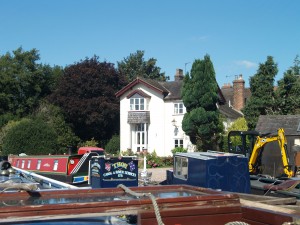 large and offers a butchers, a shop and a bistro with short term, long term moorings and over night stay if required.  Well that’s what their sign says. Looks modern and well equipped from what I could see. Now at Aston lock my friends are not behind me so I have to empty the lock then cruise in and close the gates. The bottom gates here are ridiculously easy to move so be careful with them. I raised the ground paddle slightly and waited for the boat to go back a little then forward, I’d left it in gear to keep the nose on the gate but it wasn’t coming back to the gate. It was a foot off it????? My friends

arrived and as they got their windlass out I realised I hadn’t dropped the paddles in the bottom gate. If I’d been on my own I could have been there for a while. She did agree with me that I shouldn’t really be let out on my own. Anyway through the lock then into Stone. It is quite a way from this lock up to next lock and the Star public house and a mooring was to be had about 400 yds down from it.

Get the home in order, a quick shower and a walk into town to find a cash 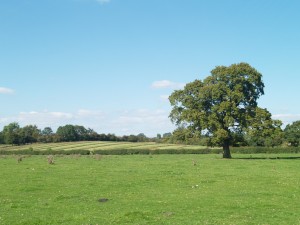 point. I walked past the star and sort of headed left then followed the road round and eventually found a couple of banks to withdraw some loot. A walk through the now deserted shopping area and back down to the Star where I tried a pint of the Bank’s Sunburst which advertised a  light fresh citrus flavour and indeed it did deliver. A really clean, tasty and wholesome pint it was then back to base for the previously described bacon, egg and tomatoes and write this blog.

Who knows what tomorrow may bring. Tomorrow, tomorrow, I’ll love you tomorrow, it’s only a day away.

I could write for musicals you know if I tried. 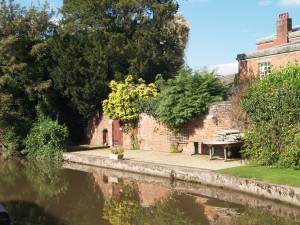