Good evening to you all and a lovely day it’s been. I haven’t travelled far but have got one of my jobs done that I wanted 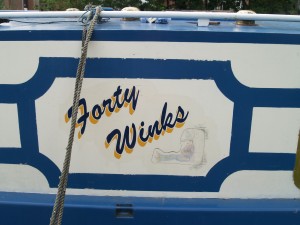 to do in fact maybe nearly two. If you count swabbing down the side of the boat on which I was moored, I might do the other side in a bit or tomorrow as I’m moored on the other side now if I’m making any sense.

get at the other side I decided to get Forty Winks removed all together. A much easier task now I know they are sticky letters and transfers and about an hour of scraping and peeling and the name is no more. A little sad perhaps but Forty Winks meant nothing to me so now she is called “Steppin’ Out” I did consider others but I’ve stepped out in a few ways again lately so it really had to be that and of course all my blogs from the start have been Steppin’ Out so that’s what she’s called now.

After breakfast and coffee I moved from the Plum Pudding down through the Armitage tunnel, which has no roof?, then moored up opposite Hawkeshead Priory while I remove the stickers and sanded a 4 or 5 bad rust blebs and gave them a spot of primer. I rang and confirmed my booking for bottom blacking in November at Shobnall marina, tidied things up, had a quick shower then went and filled up with water and we were ready to roll.

I’m not sure I can keep this level of excitement up but I’ll try. Nasty little bend with bridge as you pull of the water with the Ash Tree pub just on the other side of the bridge. It looks quite nice, a bit modern, theme pub type I think, Brewers Fare or Hungry Horse or something but looks nice. 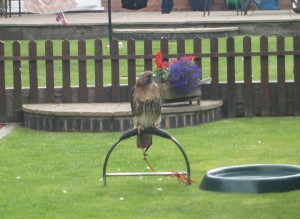 about 12 feet to spare, my nerves were on edge, my life flashed before me and OK I might be exaggerating a little to raise the viewing figures. I did the gentlemanly thing and reversed back and we all passed pleasantries and we went on our way. Just after this there is someone who keeps birds and he had a couple of Falcons on stands at the bottom near the canal so I took a couple of photos. They are lovely birds, great to see but I’m never quite happy to see things in captivity but they might have been rescued I don’t know.

The canal meanders through Brereton, as canals have a habit of doing, and at 2 mph everything looked quite nice and all felt right with the world. Nothing of outstanding beauty just good old canal type corridor through a little suburban area. Then comes a new bridge straight on top of a high arched old stone bridge which marks the start of Rugeley. 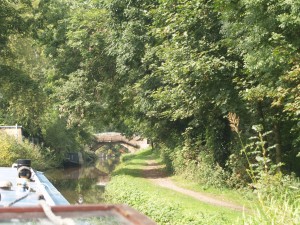 As you go through the bridge and negotiate the corner the canal narrows a little and boats normally moored all the way into the town centre it can be a bit of hassle if there are oncoming boats. There were plenty of spaces to moor today and no one coming the other way so an easy passage for me. A good place to stop here if you want to shop as there are a couple of good sized supermarkets only 2 or 3 hundred yards from bridge 66. Again it is a pleasant passage through the town centre with an array of different houses backing onto the canal.  Up past the graveyard then there is a stretch of houses all high up with gardens running down to canal. probably about 40 or 50 foot drop and I found it very interesting to see how each one had tackled this problem and how pleasant it made the last northward part of Rugeley. 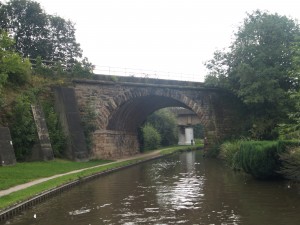 degrees and you pass over the river Trent on a good sized aqueduct and out into the country again.  Under a road bridge then round a corner, a little canal bridge and as you pass through turn left and the view just opens out in front of you. Apparently all this on the left is Cannock chase.

There are some nice mown and planked single mooring spots here at nicely spaced intervals. I stopped here for a cuppa last year when I came up this way so I’d decided to overnight here this time. There is another boat in the next one down from me but a good hundred yards and half hidden by the reeds so no problem. I’m sat here writing this and it is so lovely and peaceful with just the odd train passing. The railway line is only a few hundred yards away but again not a real problem.

I shall sit back and relax, a glass of something, a strum of the guitar maybe, a few pages of a good book, a nice salad for

tea and perhaps an early night and a second glass of something. They don’t write edge of the seat dramas like this any more you know……………… and pleased we all our about that aren’t we boys and girls.

A few words of wisdom I picked up recently which hit a chord in me.

Everything you hear is an opinion. It is not a fact.

Everything you see is a perspective. It is not a truth.