Good evening or morning depending. Day 3 started and finished well but had a little hiccough in the middle. A friend of mine joined me for today and he arrived at about 8.30 so we had a coffee and a bit of a chat to catch up on things.  I also tried to explain some of  what we would be doing with locks and things. We set off about 11.00, good job it was only a little chat. We negotiated Alrewas top lock and set of at a dawdling pace just to enjoy the scenery in the lovely 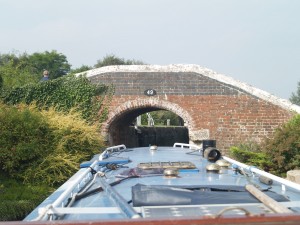 sunshine. Nice and warm again and the world seemed good. We reached Fradley bottom lock and those coming down held the gates for us and we sailed straight in. I’m explaining as best I can about locks and how we do things as it was his first ever day on the canals. Through the second lock and we decided it would be unfriendly not to stop and sample the beer in the White Swan so we moored up.

It is an old country style pub with a proper bar and best side and a fine selection of real ales and a landlord with a sense of humour. We sat out side in the sunshine and watched a few boats go through and a couple of very nice old motorbikes came past too. A BSA and I think the other one was an AJS  if my memory serves me right. Both in really lovely condition and sounding just beautiful. A couple of pints and then head back for the boat which was moored opposite the CRT cafe from which came the smell of bacon. My friend had brought some bacon with him so we had a couple of bacon butties to soak up the beer. We had brown 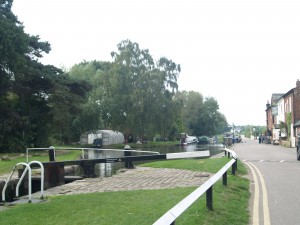 sauce with the bacon which is the only sauce you can have. None of this tomatoe sauce malarky, not on bacon. It’s perfectly al right to have red sauce on sausages, mushy peas, chips or anything else really but bacon has to be brown sauce. I’m not trying to start an argument, I’m just right.

After consuming the correctly condimented, afore mentioned sandwiches we set off on our travels. We passed through the next two locks and at Fradley top lock we had our little incident. My friend went up to see if the lock was empty while I held the boat and he let the water out and opened the gates and I was half way under the bridge in front of the lock when I could a strange voice shouting and threatening to knock my friend into the lock and a few other things. As I got nearly into the lock so I could begin to see what was happening I shouted up “there’s no need for this” but the chap was marching off still effing an blinding and my mate was stood with the lock gate looking calm if not a little non nonplussed. 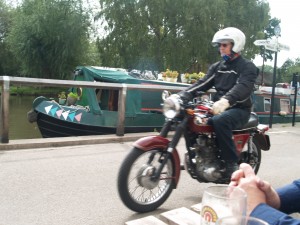 boat was well back from them and he’d assumed he was pulling in so had let the water out. This guy had then come down threatening and swearing and had a right go at him, which I’d heard some of. Once the lock had filled up a bit so I could get off I started walking off towards this guy and the angry man’s wife who was helping my mate with the locks said best just leave him he’ll calm down. I told her I wasn’t going to have a go at him and he was talking to two women coming down after him to come through. I apologised to him and explained it was my friends first day on the canals and though it wasn’t my first day I’d been explaining as we went along and that if he’d have explained to my mate what he’d done wrong and what he should have done it might have been more helpful. He had calmed down a bit by now and I went back and we bid Mr Angry’s wife farewell and even Mr Angry too. Apparently he had been moving other boats and this was the second time today it had happened. 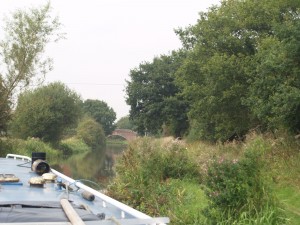 don’t know what should be done. Maybe we should enquire if they know what the right way is and if not to explain to them instead of either saying nothing or getting a bit angry inside. Shouting, swearing and threatening to drop somebody in the lock isn’t really the right way to do it. Or is it?

We poddled on amidst the lovely scenery and past Ravenshaw wood which I think is a lovely spot to moor up at if you like piece and quiet away from anyone. Through more lovely countryside which runs up past King’s Bromley marina all the way to Handsacre. The canal through Handsacre is quite pleasant even under the railway bridge and up past the factory and a little industrial estate. Just before the railway bridge there is another bridge and as there are a couple of turns too we met another boat coming the other way. He was up to the bridge and I’d just got my nose there when we saw each other. We both just about stopped and I started to back  up as I deemed I was in a straight enough line to back up onto the side of the canal to let him pass when he waived us on. Both boats moved forward very slowly and a little gentle nudging and we both on our way none the worse for anything. Attitude is a wonderful thing. 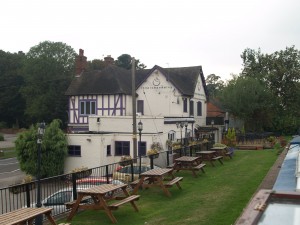 Anyway we trudged on a little further and there gleaming at the side of the canal was our planned destination.  The Plum Pudding watering hole. After mooring up and another coffee we decided to try a beer while we waited for my mate’s wife to join us. Inside it was nice and tidy with one side decked out with tables ready for eating. I asked for a couple of menus and the waiter also pointed over to the specials board. We went we looked, and we found out later both had the same though, shoot. The mains on the “special board” were all 5p change from a £20 pound note. I’m showing my class now, or lack of it, but I don’t normally pay that sort of price just for a main course.

We took our beer and the menus outside and perused. Not all the meals were that price and it was an Italian restaurant. I had moored on their bit which is reserved for customers so I felt obliged to eat there and the menu descriptions certainly sounded appealing. The young lady arrived and we ordered our meals. I had fillets of beef in a port, brandy and peppercorn sauce which came with sautéed potatoes and vegetables, my friend the lamb shank and his good lady a pasta dish. Everything was delicious if not over the top in size of the portions. Often the case it seems in the more up market establishments. So if you’re passing and want something a little special, they do Tuna steak and Swordfish steak and a good selection of other dishes oh and that includes calamari, or squid if you like. It is worth a look. Quality of food excellent, value a little pricey for me but I think it’s on a par with other Italian restaurants and similar standard places. Good service too.