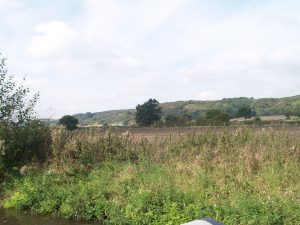 Good evening as I write this and apologise for the lateness off the final instalment of my World Tour but settling back in and things, you know how it is.

I arose reasonably early Saturday morning and  got myself organised then checked if John my neighbour was up. I wasn’t sure so didn’t knock but shortly he came round I offered him breakfast of milky coffee and a couple of bacon cobs which he eagerly accepted. So we did a bit of catching up and chewing the cud as he’s off out continual cruising for a while now so probably won’t see him for a while. 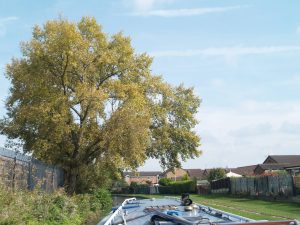 I weighed the anchor, far too heavy, spliced me main sail, untied a couple of ropes and I was moving by shortly after 10.30. The day was overcast but warming up quite nicely and I felt at peace with myself and the world. This feeling needs to occur more often, I’m working on it. While autumn colours aren’t in abundance yet some of the trees are starting to change and a few leaves leaving anchorage too. Down passed Shobnall marina and Shobnall fields where there were several 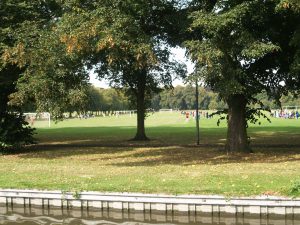 Saturday morning football matches under way and this leads onto Dallow Lane lock where one boat just coming out and another waiting to come up so I was straight in and helped through again. The timing of my arrival at the locks on this trip has been highly fortunate almost spooky some would say. This is a bye product I think of selling my soul.

I am just dawdling along and enjoying the run for home and feeling like I’m glad to be back and looking forward to some of the things I need to do and meeting up with neighbours and friends again even though it’s only been twelve days. I feel well refreshed and have enjoyed my time out tremendously but now there are new ventures to start rolling and enjoyable work to continue as well as not so enjoyable work to go back to on Thursday but it pays the bills. 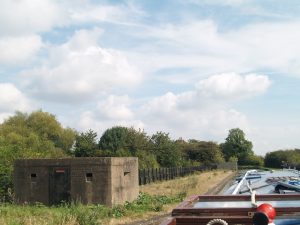 sky. Still quite a bit of traffic and a couple of Avante hire boats passed me, they are based at Mercia. I’d passed quite a few over the last few days heading North so hopefully they’ve had a decent season. I turn a corner and the cooling towers are stood tall and proud and I know I’ve only a couple of miles left to travel. Willington village and a little negotiating under the bridges and down passed the gardens, which face onto the canal, that belong to a row of terraced houses where mostly they grow vegetables and fruit. 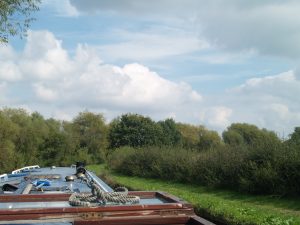 There seems to be a good supply of fruit and a couple are busy digging something out or digging it over ready to plant. Under the railway bridge round the corner and I follow the marina trip boat through the tight entrance and I make the turn and never touch a twig. This makes up however for my negotiation of my mooring where we have two boats moored between a pair of jetties and my neighbours are away so I have a double berth to aim for which due to me being very relaxed 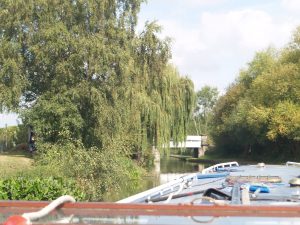 and the breeze being the opposite way to normal I miss completely and end up with my nose on the end of the far jetty of the two and my boat across the front of the boats moored on the bottom. I used the end of the jetty as a pivot and got my stern back out into open water, reversed up and quickly tied myself to my mooring. No one saw me so it doesn’t count.

I’d forgotten but there was a free hog roast on over the other side of the marina with drinks and entertainment today. This was to say thank you to the moorers for the inconvenience while building the new Boardwalk which is now partly open. Looking forward to the opening of the bar which 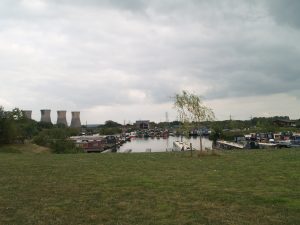 shouldn’t be too long.  My neighbour Ken reminded me and we went and had a look. It had been on since 1 pm and it was now 2.30 so I didn’t fancy our chances of finding anything left. There wasn’t but many were still enjoying the entertainment of a few moorers and friends playing, very enjoyable. Lightning Pete who I know from the folk clubs was leading some of it and he’s a good singer and a really good harmonica player. If you like bluesy, skiffle style good time music Pete and a few others go out as “The Chilli Dogs” and are well worth a visit if playing anywhere near you.

That brings me to the end of my outing which set out quietly and yet came home to a party. I hadn’t realised how much they’d missed me. I can dream. I hope you’ve enjoyed my ramblings and I’ll try and blog a bit more often and keep you up to date with what’s happening locally and at the marina too. 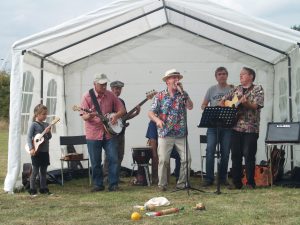 Many thanks for reading and the comments.

Photos; 1. Looking back as I enter Burton.  2. A lovely tree beginning to change.  3. Shobnall Fields and the football.  4. Pillbox on the river Dove.     5. More blue sky and trees.  6. Over hanging Willow and out of shot left are the couple digging their allotment/garden.  6. Mercia marina with the new Boardwalk building.  7. The merry band of entertainers with Lightning Pete fronting.

Glad you had a great trip Nige and thanks for posting your travels.

That was a great account of your two weeks away. I’m out at the end of next week, but only for a week and only to moor somewhere quiet and touch up the paintwork. I don’t think I’ll have nearly as much fun as you!