Steppin’ Out; the epiblog part 1

Hi to all and everyone who followed our progress. This has been an amazing journey for me and my crew. Some journeys aren’t just about the mileage involved sometimes it’s the inter-dimensional space time continuum transponders too. A time to just not think about anything other than the event happening to you right now. Nine days we had of that with the first four or five taking up so much of our focus and concentration purely because we hadn’t got much of a clue what we were doing. The rest of the world didn’t exist so for a short time no worries at all apart from where the next tap is? Or how the hell am I supposed to manoeuvre the damn thing into there then?

I have now had a few days back in something resembling the real world to look and think about what I’ve done by taking on a new life and this epiblog which was only going to be one post looks like it might turn into a couple more. If you get bored feel free to find another channel. Some of my old friends will sort of slip out of my life a little and some new ones will appear. This will happen over the next few months and years. This is a healthy way for lives to progress as some times we’re reticent to make changes or let them happen. Life is about moving forward and not just sitting where it’s comfy. We all have the option to choose which ever suits us. I feel I’ve made the right choice for me even though some of the people I know have looked at me strangely and really can’t see why I’ve swapped a house for a boat. They really are baffled.

Day one of this trip seems so far away yet it’s only just over a fortnight since we travelled to Lymm and picked up Forty Winks. We stalked a guy into Manchester as we were travelling at just his walking speed when he joined us walking up the towpath. A few times I felt like offering him a lift but chickened out. This was the only day we had the pram hood up and it was the only day it actually rained most of the time. I do agree with Paul though that it’s much better and much easier to travel with it down and out the way. It was because of Paul’s advice that we took it down the following morning as we were ready to set off.

The night before when we had arrived at Castlefield was a frightening experience for a real novice boater as I had to try and manoeuvre into a mooring knowing nothing, well very little anyway.

I wonder whether I would have been better taking a boat handling course before embarking on this journey. It would have made it easier but would it have been such an experience and challenge. I do feel as though we achieved something on a personal level. Myself certainly and Steve agreed it had helped sort out some of his mid life choices too. Who would have thought Manchester could be so therapeutic. We could declare it another spar town.

People said I was brave doing this and I suppose I thought I was a bit too but I’ve just read Mary’s post and at 86 my admiration, respect and good wishes go out to her and puts my exploit into perspective. Life is to be lived. If this is what you fancy don’t wait about humming and ahing about it. Choose life in all its fullness while it’s still here. I’ve had a week in the marina as I write this bit and I can’t remember feeling as relaxed, content and peaceful as this for a long long while, if ever. Sitting with a cup of coffee on the back of my boat in a morning is just a wonderful experience and just about equalled by sitting on the back of the boat with a glass of malt whisky of an evening. I feel so lucky and blessed it brings a tear to my eye, but not admitting to that in public. Even though I can hear the A38 in the background the feeling of peace and wonder has knocked years off me I feel. I feel alive again. I just hope it will continue and I don’t get bored of it in another month.

Boredom was something we didn’t see in the journey through Manchester. It was a blur of so many new experiences, sights, sounds and smells that the rest of the world didn’t exist and on top of that swapping stories with Les and Heather our new companions through the locks was a great way to start the week. 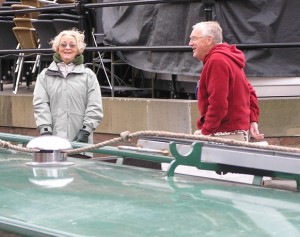 A Canadian couple, Les was 71 and had recovered from cancer a few years ago and had more recently suffered a heart attack. They had done one weeks narrowboating before but that was about 13 years ago. So a little like Mary they were taking life by the scruff of the neck and giving it a good shake. I know it isn’t everyone in the boating world but there are a lot of nice people on boats which does restore your faith somewhat in human nature. The Rochdale canal is not the ideal place to start learning how to use and negotiate locks but we don’t always get the ideal places to start learning anything. The first lock didn’t want to fill up and after about forty minutes the guy behind us came up to see what the problem was. Which was the last 1/4 inch of water or even less. The BW workers at the side said the water level in the pounds was down a bit and this was the problem as they normally flow over the top of the gates and equalise the levels that way. The guy behind suggested we push gently with both boats and see if we could just open the gates enough to let some water through which we were able to do. Can’t say I was happy as I didn’t want to damage the gates or anything but here didn’t seem much alternative and it was the same with some of the gates later on but the Rochdale canal was the only time we had this problem thankfully. The rest of the locks weren’t as bad but there are places where there isn’t any towpath and one of the boats has to pick up the lockers to take them to the next one. 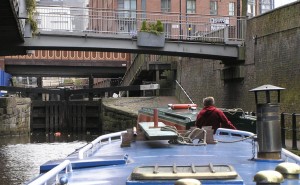 While waiting for the locks to be prepared I found it difficult at times to keep the boat straight and ready to enter as the pounds weren’t wide and even though you’re between high buildings the wind was whistling down in places and pushing us where it wanted. Now I see the use of the barge pole or at least one use of it. I learned quite a bit about the steerage problems and a little about how to line up but using reverse while much needed at times didn’t always make sense to me. It was with some relief that we made it to the last of the Rochdale locks which is actually beneath a building and felt a bit strange as there were concrete columns for you to rest against or the boat anyway. Steve asked me afterwards if I’d seen the signs near the lock. These threatened prosecution for anyone  caught indulging in lewd behaviour. There might have been CCTV there as well. Don’t know if this had anything to do with having passed or being in the GAY part of Manchester. I did notice a bar with G.A.Y. in huge letters as it’s name. A subtle little touch I thought and would the understatement be missed by some.

Out of the lock and a very tight right turn followed by a very sharp left turn with a bridge and a boat half way through, oh bugger, but a bit of reverse and thankfully a little bit of room on the canal at this point and we cruised on for a few hundred yards and moored up for lunch in front of some very nice looking flats at Piccadilly Village. Heather and Les had been recommended to overnight there but as it was only one o’clock we thought that maybe we could get through the rest of the locks that day so after lunch we set off again. After we had negotiated another three locks and this section while prettier than Manchester wasn’t exactly wonderful we passed another boat going down who said to Heather that after the next three or four locks then there were no safe moorings till the last lock. We took this on board and did another couple and met another boat who’s crew said the same thing so we found a sheltered spot in front of a stone wall near the Velodrome and moored up for the night. People were jogging down the towpath so we thought maybe this isn’t such a bad area and there wasn’t much litter and no bottles strewn about.

After eating a hearty meal, of I remember not what it was, Les and Heather came round and they offered us some very nice and well appreciated Port. None of us are very young and after a hard and long day we drew stumps early and went to bed. No disturbances in the night. I never heard a thing. I was totally bushed.

Awesome post Nige. Beautifully natural style, and wicked humour dropped in for good measure. Looking forward to the next offering.

At this rate, we’ll have to form a literary corner on the forum, for those bloggers who are published. Ok yah ???

Certainly brave stopping overnight on the Ashton.It has a terrible reputation but, to be fair, it has improved considerably since the building of the stadium and velodrome for the Commonwealth Games. One or two locks below the Velodrome is a stretch of moorings with rings but I’ve never been brave enough to stop. I think my choice, if I had to, would be a couple of locks up opposite the Asda.

Good luck on your next cruise.

Opposite the ASDA was where we were, well a hundred yards on. That’s what we were told, after the ASDA it gets a bit ropey and it certainly was.