Hi to all welcome to the last post for this adventure. That really is what it’s been for me and Steve and Linda an adventure. Scary at times but a lot of fun and well worth the effort. Now it’s about a new life style but let us not get ahead of ourselves. We had to wait for the IR man to come and fix what turned out to be just a broken gearbox cable and away we went shortly after 11. It was a bit windy today and though it caused us a bit of a problem on occassions we coped. Steve had to come and give me a push of the bank where I’d dropped him to do the lock as even though I pushed it well out with the barge pole it was back in again by the time I’d got on board.

Oh I nearly forgot to tell you about The Swan pub at Fradley. We had wandered up there about 9pm and the bar was packed so we got some drinks and headed for the best side where there wasn’t anyone. Normally we would have stayed in the tap side especially with an artist on, a guy with an acoustic guitar and pretty good he was too. But I’m old and was definitely tired so we went for the seating. Turned out to be an Open Mike night and the ones we heard were all good at least upto very good. Normally I’d have joined in but the travelling is catching up on me. They do Thatcher’s Gold cider which is not a scrumpy but it is good and I stuck with that all night, well only three pints actually, Steve had four pints of Black Sheep bitter which he said was very good. The food prices looked quite fair around the £7 to £7.50 mark for most and a reasonable selection. I shall be visiting again in my road vehicle in the not too distant future as it can’t be more than about 30 minutes tops to get there. 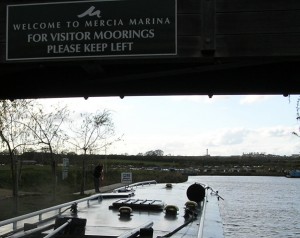 We passed through Alrewas which is an affluent little place to go by the nice houses on the banks of the canal and down to the A38 which then runs along side the  canal for a couple of miles. This was the first real road noise we had encountered for over a week. We hadn’t noticed much even when travelling through Manchester. We made a stop for lunch. Sausage cobs then off again. We plodded on into Burton and through the otherside where we met the A38 again and the noise was twice as loud. Horrendous was the word I was looking for. Down into Willington and we were running to get there after 6 so I rang the marina to see what time they closed, I thought it was 6, and it was 5.30 but he would hang on till we got there which he did. Very good of him as I needed a fob to get Lindas car near the jetty.

We finished off the trip in the same manner as we started it, panic, panic, panic. When we turned into the marina’s open water the wind just did not want to let me turn and it took me about 10 minutes to turn and head for the jetty where my berth was. When we turned into the bay where it was the wind was at it again and then I lost position and tried to back up and had to fight it all the way out into open water again to get it go in a straight sodding line. Then trying to turn into the berth she went again and I managed to get the front end on the end of the jetty and Steve scrambled down the gunwales once he was on the jetty holding the nose then we could spin her round and in she went with out bumping the boat next to her.

Someone smiles on me regularly. Thank God.

HOME at last. Sad but satisfied, happy and tired. Now settled on the computer writing this with a bottle of English Pale Ale after a nice shower and bite to eat. I shall do another entry on this journey to tie things together and work out how far we’ve travelled and how many locks. We decided we would call this “The Epiblog” this will need explaining to anyone under 45.  I shall take a few days now I have the time to think about what happened to us en route and probably post over the weekend. Thanks for sharing this journey and I hope you enjoyed reading it as much as I’ve enjoyed writing it.

Ah, the pleasure of trying to steer a narrowboat onto a mooring on a windy marina.I know only too well what you mean. Our marina entrance on the GU was known by boatmen as “Windy Corner”. I believe that the record for a boat being unable to get off the towpath and into the marina is three days! You have to first enter our Locks marina before branching off to Meadow marina where I moor. Meadows marina is the windier of the two. If the wind is blowing, you have to forget about reversing onto the mooring until the weather improves.

Well done. You’ve made it back to your home mooring in one piece, and you have plenty of tales to tell. Best of all, you’ve recorded your experience in your blog. You’ll be able to relive it time and time again in the years to come. And relive the other adventures I hope you’ll have in the future.

Our Nige said
I shall do another entry on this journey to tie things together and work out how far we’ve travelled and how many locks.

Thank you for the epic story, and best wishes in your new home.

According to CanalPlan, your trip consisted of this:

This will take 48 hours, 35 minutes which is 6 days, 6 hours and 35 minutes at 7 hours per day. For calculation purposes this is taken as 7 days.

It will be interesting to see how the reality compares.

………………..Thanks for sharing this journey and I hope you enjoyed reading it as much as I’ve enjoyed writing it.

Thanks Nige, I enjoyed reading that! Will certainly be interested in your longer view of it all.

Well done Nige, much enjoyed reading of your adventure.  When is the next one?