Steppin’ Out; Day 6 Congleton through the Harecastle to Stone.

Good morning peoples I was rudely awoken by Cath ringing at 8o’clock to complain where yesterdays Blog was. So at least someones reading it. Sorry it wasn’t done last night but we started at 9am and moored up at 8pm with a canal side Pub beckoning us once we’d eaten. This shows you were my loyalty lies. Me, me, me, me, me.

9.00 am and off we poddled heading for the Harecastle tunnel. A quick stop for water, a gas bottle and a couple of fenders. Daft as it will seem to some of you but we had been travelling with the fenders down and with some tight bridges and locks we had lost a few. 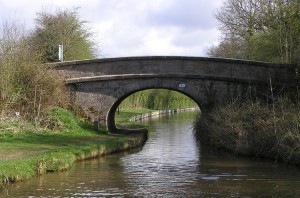 Just a bridge but is it one to far?

The man at the boat services explained you let the rubbing strip do its work when travelling and fenders when not. So simple I guess no one thought to mention it to me or I didn’t really pick up on it. So any newcommers just a little tip to save a little money.

The Harecastle tunnel, as you all know is 1 and 3/4 miles long and you go through in convoy, taught me a big lesson. Headlights. The ones on the boat we had used for a smaller tunnel and found they were pointing down not up so we pointed them up. They weren’t very bright but the tunnel wasn’t very long so no problem really. However we were the lead boat through the Harecastle and didn’t ckeck the angle on the headlights. They were pointing down again so I came through the tunnel with the internal lights being the  only practical lights we had and focusing intently on a the pinprick of light at the end of it. It helps with your level of concentration let me tell you. Only a few bounces and no casualties so when we emerged the other side transported back three centuries inot radient sunshine we all had a good laugh and a cup of coffee and crisps and a ham cob.

Stoke we found to be a lot nicer than we had been led to believe. Not spectacularly picturesque but apart from a few areas which looked a bit dodgy we saw nothing as bad as Manchester. Trentham looks a nice place, quite a few nice houses down by the waterside and it winds gently through the trees and all very pleasant. A very welcome change. 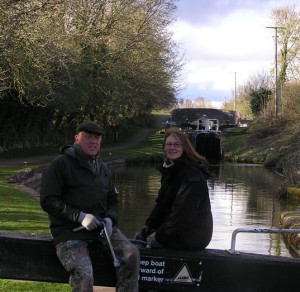 Steve and Linda my intrepid lockers and crew.

We arrived at Meaford locks thinking we might moor up if we could find a nice little pub on the side of the canal. The locks were beautiful but no pub so we thought we’d go on a little bit more. Stone we thought would have loads of pubs everywhere but when you cruise into Stone there isn’t a pub in sight. AAAAAAAAAAAAAAAAAggghhhhhhh. After about 10 hours travelling through typical spring weather, sunshine, fluffy clouds, rain, and two sleet showers we’d just about had enough of a good thing. We pulled over and Steve and Linda went on a recky to what was about.

Upon return they had met some boaters who said there were moorings at the bottom lock and a PUB by the side of the canal. Off we jolly well went only to find no mooring spaces other than where there were signs saying No Mooring. Me and Steve were about to become pirates and drop Anchor in the middle of the canal declare ouselves an independant country when he spied a space about 9 boats down so we stayed as fine upright citizens and didn’t break any rules.

Bacon, egg, mushrooms and tomatoes from Linda’s magic frying pan. Egg cooked to absolute perfection, all the white cooked but most of the yolk runny. Gordon Ramsey bah. Washed, fed and watered we set off to pub. First call was The Swan where I sampled a sweet scrumpy cider followed by a pint of Black Rat medium. Excellent. Steve had a couple of the beers which I can’t now remember what they were but were good. Busy Friday night in there mainly 40 year olds and above but a bit yuppyish. Very nice and great beer. Then we went down to the Star which wasn’t as busy and looked more of a locals pub. A pint of Bank’s bitter for me and a pint of Old Thumper for Steve both very nice. Got chatting to a couple of the locals one and old lad like me or a bit older and a chap 35/40ish both narrowboaters and the younger one lived on his and I’m not sure if the other guy lived on his or not but both well friendly and helpful. They said we should find more pubs as we head south. They do seem lacking as we’ve travelled from Manchester. I would have thought people would have built pubs near the canals over the years.

Today we clocked up we think. 18miles, 1 tunnel and 13 locks in about 11hrs with an hour off for good behaviour waiting at the tunnel. A long day even when you’re doing something you enjoy. I now look at the boat at times and think “this is mine, this is my home” and it feels bloody good at the moment.

God bless you. See you later.

9.00 am and off we poddled heading for the Harecastle tunnel. A quick stop for water, a gas bottle and a couple of fenders. Daft as it will seem to some of you but we had been travelling with the fenders down and with some tight bridges and locks we had lost a few.

The man at the boat services explained you let the rubbing strip do its work when travelling and fenders when not. So simple I guess no one thought to mention it to me or I didn’t really pick up on it. So any newcommers just a little tip to save a little money.

Another disadvantage of travelling with fenders down is when you traverse a narrow lock that is “tight”. It is possible for the fenders to jam the boat in the lock and I understand a boat has been sunk in this way

It’s something you learn with experience.

Fenders up or down really depends on:

1. What sort of fenders. Rope fenders are anything between 3 and 6 inches in diameter. Rubber ones about 1 1/2.

2. Where they hang from. Some boats have fender eyes on the gunwhales with the fenders held by snap links so not much give before they break. Others hang from the top and have a lot of movement.

3. Narrow or wide canal or even commercial! We usually pull our fenders up on narrow canals unless we know we shall be mooring before the next lock or narrow bridge. On wide canals we tend to leave them down even though we often only open one gate. If you are in a wide lock on your own there can be a lot of movement so fenders may prevent some paint damage. On commercial canals always down. On one hire boat on the Aire & Calder the fenders were tyres. When you see the size of the piling you could see why.

We used to have rope fenders but they pick up a lot of grit over time and also take on a flattened appearance so they no longer roll along the gunwhale. Consequently you can end up with an arc of abraded paint due to the grit. So now we have rubber fenders for general use with a couple of rope ones on hangers for those times we are mooring for some time. We also have some look-a-like tyres that I use to keep the boat away from the side if there are obstructions or I’m painting.

I know rubbing strakes are fair game but when you’ve painted them for the 20th time you’ll wish the paint lasted a bit longer!

PS. Why is the site spell checker American?

PS. Why is the site spell checker American?

There seem to be some hidden photos in your blog posts. I know Paul is looking into the cause of this.