Steppin’ out; Day 5, Fourlane-ends to Congleton.

Hello out there, a bloody long day today. Set off at 20 to 9 and we headed for Bollington as we needed some diesel and a pumpout. We were level when we saw the signs so carried on as reversing wasn’t an option. We found a boatyard in Macclesfield, Buxton Rd Wharf who deserve a mention as he was really helpful. Pump out done he said right reverse round into the basin. I looked at him like he had two heads, well I would have been there about three hours, thankfully he said he’d reverse it round for me if I liked. I certainly liked. He also explained what he was doing and how, this was very helpful and I know a bit more now about reversing. As we were travelling along I asked Steve a guarded question as I didn’t want to worry him or anything but I thought it looked like the canal and the towpath were running slightly down hill. He agreed it certainly looked a bit like that. A strange feeling when our Grammar school physics teacher of 40 years ago had explained basically that this can’t happen. Does anyon know if there is a gravitational anomally any where near Macclesfield.

Off we set and made good time through some lovely countryside. A nice canal is the Macclesfield. Stopped for lunch which was home made soup that Linda had brought with her. Went down a treat it did. After eating a warming meal we encountered an electric controlled swing bridge which we negotiated well as someone was coming the other way just as we got there so they operated it and let us through. 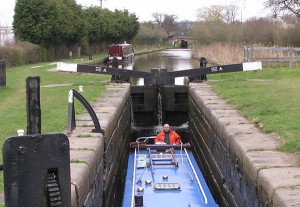 Then we came to the Bosley locks. The first we had encountered going down hill. Lovely views and nice locks and we met someone coming up after our first lock so they were all set for us going down. Quite deep but easy to use and quick.

We decided to press on with the intention of hopefully getting through Stoke tomorrow as we have been told it’s not the best of places to moor overnight. We trucked on and got to Congleton which doesn’t seem a wonderful place for mooring either. One of our guide books says to watch out for submerged obstacles at Congleton wharf and we certainly had a bit of bother as the rudder and prop kept knocking into things at certain places. The book was written 20 yrs ago, have they not had time to remove the submerged objects then.

A long day came to an end, 16 miles and 12 locks, when we moored up in the middle of Congleton golf course. You should have seen the look on the head greenkeepers face, it was a picture as we tied up to the fourth holes flagstick. The canal is shallow here and we could only get to about a foot from the bank but that seems close enough. Greased the sterngland. Mopped out the engine compartment and sat down to tea/dinner at about 7.30. Now a glass of Bushmills malt and a splash of Weston’s organic still cider with the Stones this time gently in the background.

The Harecastle tunnel and Stoke tomorrow. Oh Lord look after us as we may need all the help we can get.

God bless you all. Nige, Steve and Linda.

Linda says goodnight we’re off for Forty Winks. I’m not accepting responsibility for that one.