Hello out there we have had a much nice and better day today. No Manchester, sorry to any Mancunians but I don’t like cities.  Our first lock was all of 300 yds from where we were moored and we attacked the beginning of the Marple flight at 9.00. Very nice area and lots of trees and pleasant people. People smiling mostly, is this area know for its drug use? No major disasters apart from me trying to get the boat in a single lock broadside. It just wouldn’t fit. Brian went into melt down and I pushed the tiller instead of pulling and it shot off into another dimension. 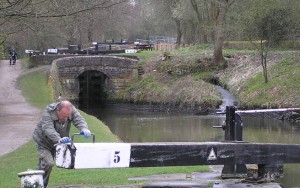 Friendly people everwhere setting locks for us as they were coming down as we were coming up. Many thanks to all who helped our progress or just chatted with us in passing. 16 locks in 4 hours and we were moored up by 1.00pm but then had to do my first weed hatch experience as there was a knocking type of sound while we were climbing the flight of locks. So undo the weed hatch and mine is situated where they all are but with a tool box built over where you would lift the deck up so had to weedle my way under the deck and into the hatch a bit of a bind but now having done it will leave the tool box where it is I thinkl. A few bits of tshirt and some plastic banding strapping but managed to get it off after about 15 minutes. I was quite chuffed with my self. 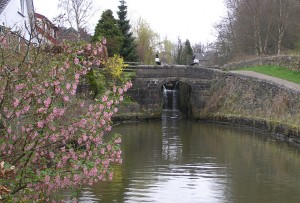 One of the beautiful pounds in Marple.

Steve went off to find a shop for some cobs for our lunch. Just round the corner we were told, they have big corners up here. 30 minutes later her returned with a couple of very nice beef pies and lovely fresh bread cobs. After dinner off to meet his good lady who is joining us till Sunday. She is bringing some fresh supplies too. We had just moored up at Fourlane-ends as Linda arrived chauffeur driven by her very nice nextdoor neighbour. Importantly she had brought the ancient runes and magic symbol of the Wire Coathanger which after many incantations of “come on you bugger” finally our bathroom sink realised it anally retentive grip on the water it was holding hostage.

A wash and a brush up and we set off to what we were told was a very nice pub that did good, very good food. The Miners. The beer was ok but not stunning. One label as the Miners ale but was an unnamed one from the brewery and not a microbrewery, a bit of a let down as we thought it was a real ale. But ok. Food wise I had a burger which came with cheese and bacon, home made chips and salad, very very nice. Steve had the pork and leek pie which he also approved off and Linda had the chicken and chorizo tagliatelei, pasta that is. Again a big thumbs up on the food front.

Then back home to another whisky and a bit of Thin Lizzy as we’re old bikers still at heart. A good day. It’s all getting a little better. Me and Steve seem to think that Sunday seems such a long time ago. We seem to have done so much.

Goodnight and God bless you. Nige and Steve 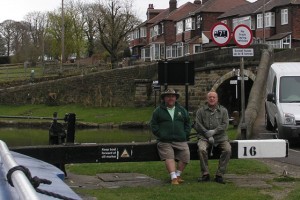 There were two old men…… at Marple top lock

I’m pleased to hear that the stress of the city is behind you. Like you, and like most other boaters I suspect, the whole idea of boating is to relax and take it easy. I had enough of misbehaving youths after nearly two decades in the pub game. All I want now is a quite life and I’m afraid, dear Nige, that doesn’t include listening to Thin Lizzy at the end of the day!

Just wanted to say I am following your blog here, and enjoying it, thanks.

Just wanted to say I am following your blog here, and enjoying it, thanks.

I think we are all following your exploits closely and enjoying them immensely.

I too am thoroughly enjoying your blog Nige, albeit with a certain amount of envy. Keep up the good work

Quick question to any techie types out there, when someone posts a photo as Nige did in his post, I cant seem to open it. The hand icon comes up when I hover over it but when I click on the picture, nothing happens. So I can only see the picture at the size it is in the post i.e. very small.

I too am thoroughly enjoying your blog Nige, albeit with a certain amount of envy. Keep up the good work

cheeseybits said
Quick question to any techie types out there, when someone posts a photo as Nige did in his post, I cant seem to open it. The hand icon comes up when I hover over it but when I click on the picture, nothing happens. So I can only see the picture at the size it is in the post i.e. very small.

I use Firefox with various add-ons and I get an option “view image”. Probably from the add-on “Image Zoom” which I find very handy

Thanks for the quick responses guys

John, Im using Internet Explorer and when I right click I dont get “view image” — the closest option is “show picture” but thats greyed out.

Paul, I tried the “read original blog” button and that works fine. Can’t believe I never noticed that button before, DOH!

Sneaks off to a corner and puts a conical hat on.