Steppin’ Out; Castlefield through the Rochdale 9 to the Velodrome.

The overnight mooring at Castlefield which I was a little concerned about turned out to be very nice. Waterfront pubs, a bit Yuppy and mondern for us old fogeys but not blaring music and a fine choice of real ales. I sampled the Happy Daze cider and then the Cheshire Cat blonde beer and then turned them into a Snakebite which was beautiful. Good bitter and good cider together is my drink of choice. Steve had the Nutty Black and which he thought were excellent too. Cashew nuts and salted peanuts too. We know how to live it up.  Party, party, party. 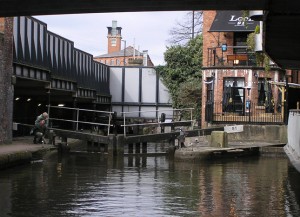 Steve and Heather hard at work.

Slept very soundly and the sun wash shining brightly when we awoke. That didn’t last very long, mind you we are in Manchester. We spied a couple waiting to enter the lock so we scurried over and joined up with a canadian couple Les and Heather who weren’t overly experienced either but we had each other for moral support at least and off we set.

The Rochdale 9, the first one took us about 45 minutes as it wouldn’t fill up. We made a little better progress with the next few but it was a long morning. 9.30 till 1.00 when we stopped for lunch. 9 locks done and about a mile and a bit covered. Now I know how much I don’t know about handling a narrowboat and I know loads more than I did yesterday. We all worked together Steve and Heather did the locking and me and Les the steering. Fair division of labour or what. On the entry to one of the locks Les ran aground and we had to give him a bit of a tow to free him. It was very shallow and bricks had tumbled into one side of the canal. This is not a particularly nice part of the canal system I think.

Steve and Heather need a second mention in this Blog as they worked their little cotton socks off. Really impressed. We’ve only done 3 miles today but we’ve done 16 locks.

We met other boater coming the other way who told us to look soon for moorings as after about four more locks the moorings  were in some dodgy areas. Heather and Steve had push Les off some shallows again and we eventually moored up. We’ve now had a nice salad for dinner and are now having a port supplied by Les and Heather who have come round for a drink. A nice evening in prospect and only eleven locks tomorrow.

God Bless you all

I had a similar pleasant experience doing the Rochdale 9. Mooring up the day before at Worsley, I took the 33 bus into town at Castlefield, which proved very interesting with its extensive web of branches running in every direction plus the well preserved Grocers wharf. As I was single handing I took the opportunity to walk the whole flight to give me a good insight into what I was up against.

The following morning I set off towards Castlefield with thoughts of doing the flight or staying there overnight depending on arrival time. As this was only just lunchtime I decided to give it a go. My luck was really in when as I attempted to tie up on the less than user friendly lock mooring, the gates opened.

It seems that a lady also single handing in a 45 foot narrowboat, had arranged for locally based friends to operate the locks for her. I was welcomed to share the locks with her, so we were through all nine in under three hours despite the first lock being very slow to fill completely as mentioned above. In fact I had to push one of the top gates open with more than a few revs from the JP2.

What an experience not only travelling through but often under the heart of Manchester. Never realised it contained so many classically beautiful old buildings. Only problem was maneuvering for the tight right turn onto the Ashton canal with what turned out to be several yards of plastic sheet around the prop.

Tied up in relatively safe Piccadilly village just before first lock of Ashton flight which I tackled the following day. Beware of the submerged object under the pedestrian bridge adjacent to normally open swing bridge between Openshaw and Fairfield. It violently lifted the stern of boat before leaving it stationary with quite a heel!

And yes you do pass through the gay centre of Manchester.