A boating friend I have recently made said I was paranoid about my weed hatch which I now check every day. I’ve found so many things down there and always feel a bit like James Herriot as I role up my sleeve and plunge my hand in to clear the various obstructions that cling to my propeller – I liken it to those cartoons where from a small box everything including a new car is removed as I pull things out.

But I’ve had a brick on a rope stall my engine…tights, trousers, an umbrella a basque which is always a worry and it took me a while to work out what it was. I saw a sign at a shop offering money for old clothes and I wondered if perhaps I should hang on to these bits and pieces for later sale.

But I’m running ahead of myself as these things all happened around Wigan last Tuesday Wednesday and I left Manchester on Sunday at about 9.30 am.

If you’re single crew get a willing friend. I found Fred at Droylesden. He likes to help with long flights and being a boat owner and live-aboard himself he is also very useful at a number of different things when it comes to boating and narrow boats. For the price of his fare and a ‘drink’ or two he’ll come and do a flight for you.

(07939 206963) and was a god send really. We descended from Manchester step by step shrugging off the doom and gloom, the noise and the screaming ambulances/police cars…I felt as if I’d been stuck in a hole for 2 weeks. Looking back I should have left earlier and sorted the pump another way but its done now and all seems to be working again. 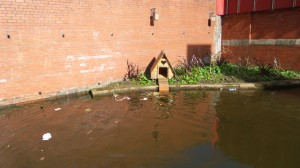 …I wonder who put these kennels here for the ducks, geese or were they for me

I reckon I could live here 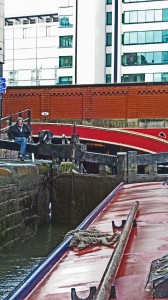 The hum and the drum did not subside but there was something in seeing the city from the canal…like peering from another world into a madness…looking through a glass bubble at the madness and scream of Sodom and Gomorrah (no pun intended).

Some snippets of art in mad places.

A worry about the low levels of water

Which proved unfounded but you can see the marks on the pillars where the water had recently been. 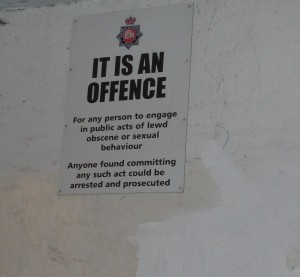 And these strange signs were all about…there were some chaps who seemed ill-dressed for the weather hanging about in tunnels…. 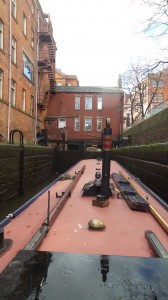 One couldn’t help but glance back at it though 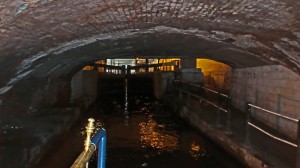 I like a backward glance. But there is actually something to be said for seeing the City from the canal and I would recommend it to anyone…it is like being able to see it as if as a tourist without all the tourist trappings but also without having to touch it as such.

I’m not against cities …I was born in London and lived there for most of my life on an inner city council estate and cities do have their charm, their energy and of course their intensity but I prefer the remoteness and quiet comfort (and beer) of the countryside if I can find it. 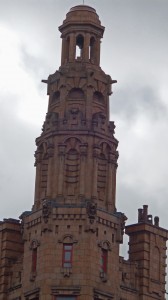 …eventually we made our way out and somewhere near Dukes 92 we got a bit sloshed and Fred went off and I went on.

I found the Leigh branch of the Bridgewater canal and stumbled across Butch and Janet – you’ll recognise them as their boat has a trike on the front and they fed me and watered (whiskey) me and so the day came to a close.