Our Nige; Joys of sunny days and The Dangers of The Dark Side.

Bear with me folks on the Epiblog but there’s so much to do now I’m home. People visiting, getting used to the marina, fetching my worldly possessions from other peoples houses and seeing what can be dispensed with as I still need to downsize some more.

What a bank holiday we had. Wall to wall sunshine and a trip out with some friends upto The Mill House pub for Sunday lunch and a pint. Theme pub but they brought the food quickly and it was ok but nothing special. The beer was good. For any one thinking about the joys of boating this was a good day with sun beating down and just gently cruising. A little bit of excitement in Willington as there were boats everwhere and the one we were following  used the winding hole and he was a 70 footer so just had to hold her in mid stream but hey where’s the rush. It really is nice to meet up with friends and a leisurely pint and then upto Burton to turn round. Which, I say boastfully with great pride, I did absolutely spot on. Turned her on her own axis. This helps to make up for some other escapades but I was dead chuffed even if that is a little childish.

Bank holiday Monday I had a group of four friends who brought lunch, wine and cider with them. 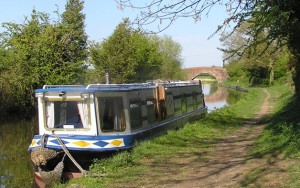 A nice spot for lunch

We set off for Stenson lock which is a very deep double lock so I thought I’d take advantage while I’d got so many crew. Their first time locking so I explained as best as I could what they might encounter and again went through it once we arrived. Plenty of Gongoozelers and two boats coming up so they could see a bit of what was going to happen. They coped ok and off we went heading for Swarkestone. We must have been doing nearly two miles an hour and it was blissful in sunshine. Having turned with only one bump we moored up for lunch. Hawthorne hedge with leaves starting to fill it out, birds singing, no road noise at all and an occasional train rolling past which was far enough away to add to rather than detract from our lunch. Home made mushroom quiche, home made potatoe salad with salad leaves, tomatoes, onion and that sort of thing washed down with a nice cider for me and wine and cider for the others then followed by home made coconut tarts and cheese scones. 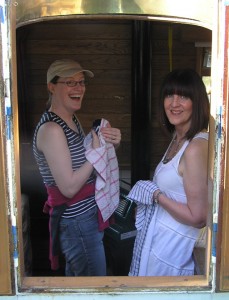 I just might invite them again, not that I’m mercinary you understand. A slow meander back to base and a seven hour outing which covered about 7 or 8 miles saw everyone so chilled out it was ridiculously wonderful.

For anyone thinking of joining the boating community  that was the colour brochure day out which lures you in with false promises but doesn’t tell you about being led astray into unnatural and down right depraved rituals which no one has mentioned to me ever. This is a world exclusive for this site too as they have never been mentioned before. Think about this before you take the plunge and sell the grandchildren to finance your new boat. I have done things this week which I’ve never in all my 56 years done before and have been lured and enticed by new nextdoor neighbour. I washed the boat down and then BRASSOED the slide for my hatch, I have taken to getting my hands dirty greasing the stern gland. Buying sheets of SANDPAPER willingly and PAINTBRUSHES. And as if that wasn’t depraved enough I’ve ordered some LOOSEPIN BRASS BUTT HINGES so I can reseat my windscreen. So please be aware that it’s not all sunshine and cheese scones there are the forces of the Dark Side lurking in amongst the reed beds. I may need to see my therapist as I think I might have been traumatised. These practises were what other people did not me, no not me ever, nurse the screens. Aaaaagggghhhhh

Absolutely splendid Nige, though sorry that you’ve been conscripted into the Dark Side

When is the book being published, I’ll be first in line at Waterstones.

Great stuff Nige.I’m trying to steer clear of the Brasso obsession myself. Although a boat full of brass looks stunning on the day that it’s been polished, the brass doesn’t look quite so attractive once it’s lost its shine. Sally and I walked past several brass covered boats last Sunday where the boat owners, sweat dripping from their brows, were buffing and polishing as if their lives depended upon it. Their eyes were glazed, and there was just the beginnings of a demented twitch. Boating, for me, is more about relaxing and enjoying the peace and tranquility. While these boat owners were working up a sweat last Sunday, Sally and I were laying on the boat roof last Sunday reading and watching the world go by.

It was indeed a glorious weekend, Nige.  So glad you are enjoying it.

I am with Paul on the polishing, though.  Before I came onboard I bought cleaner, polish and sealer.  Not sure when it will get used!

What a weekend and a half you all had.  Dont worry about being sucked in to “that side”. Difference is you are doing it because you want to, not because you have to.

So well written too, I’m with Blakie on the book, let us know when its out.

With reference to the “dark side” and boat cleaning and bits and bobs, Aldi have some good special offers on this Sunday 12th May on useful boating items including 12V socket splitters, whistling kettles, carnuba wash and wax and fire extinguishers.

Maybe worth a look

Nige did say he was Brassoing the slide for his hatch, not any of the other brassy things on a boat.

We regularly Brasso our hatch slide, all the other brass being laquered to keep its shine. It makes the hatch slide open and shut much more easily than polish or WD40.

You must be worth a fortune by now then.

You must be worth a fortune by now then.

Hi well spotted it was only the slide for the hatch and it is all new at the moment. I will do some of the paint were it’s come off but I’d relax than polish things. Even the guitar only gets a polish twice a year sometimes. Thanks for  the encouragement with the writing. That’s something else I want to try and improve and practising with my blog is certainly helping. I shall try to keep up the standard.