The marina offers a secure site for 200 non-residential moorings. We can accomodate vessels upto 63ft inllength and a maximium width of 10ft 6ins.

The marina has shared finger type and bankside moorings, see below for annual charges. Please contact us for current availability.

We also offer short term moorings, which are dependant on availability. 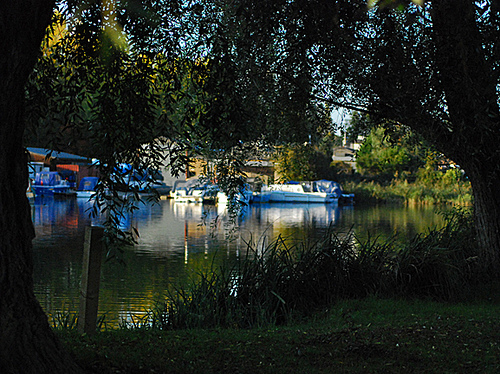 You may think that today the River Nene is under used and has few facilities but in the early 1960s the situation was even worse and permanent moorings were difficult to find. In 1964 businessman J T Newington decided to buy some land containing a gravel pit that had been dug out to provide materials for local RAF runways. The water filled pit was only separated from the river by 10 or 12 feet of land which was excavated to form a connection and in 1965 Oundle Marina was opened. Although the gravel pit provided a large area of water Jack Newington had built the marina as a mooring for his own boat and for those of some friends. However he was soon being asked for moorings by other boaters and realised the business potential of the marina. By the end of 1968 the number of boats had increased to about 35.

Today they have about 190 moorings and the rest of the site that was just a field is now occupied by Fairline Boats. Fairline Boats and Oundle Marina are run as separate companies but both are owned by Fairline. Mark Nye, the Marina Manager, reports to Fairline’s Managing Director. Mark started off by working for a caravan manufacturer but did not feel happy with the standards of their products so he joined Oundle Marina in 1969, when the business was expanding, and worked on the hire fleet together with his father who had joined the company about three months before. Mark’s mother also worked for the company for many years, retiring a few years ago.

The fleet of seven hire boats started in 1965 and consisted of new Freeman, Elysian and Seamaster boats, which were booked through Hoseasons. Mark was pleased to be able to switch from caravans to boats and after working on the hire fleet for two or three years he went into the Fairline factory and learnt how to build boats. He left the company briefly and did another job for 12 months before returning in 1980, the year his father died, to take over disposal of the hire fleet. It was found that their boats, in the hands of novices on the river Nene, were getting damaged too often to make it a viable concern. They were not getting insurance cover for most of the damage suffered, for example windscreens broken on low bridges. The Nene lock structures were also taking their toll and the work involved in the hire fleet was an impediment to developing other parts of the marina business such as workshop repairs and moorings.

The marina now offers a wide range of services including electrical work, marine engineering, a complete GRP repair service, and weld steel narrowboats but do not tackle replating or major steelwork jobs. There is a covered workshop for repainting GRP craft and narrowboats of 50 foot or less although they haven’t the space to do fitting out. There is a mobile crane and a 25 ton capacity lifting gantry, which is used for the Fairline boats. For smaller craft there is a slipway that can be used for launching trailable boats and which was very busy last summer. Oundle Marina are the only people on the river Nene to have a petrol pump on the waterside, in addition to the usual diesel pump. The chandlery shop is run by Jacqui Craig who has been at the marina for the past four years. It is doing very good business and attracts customers from around a wide area in which there are not many good chandlery shops.

There is still a lot of water space available so the moorings can be expanded by adding pontoons. The marina caters for all types of craft but does not have residential moorings. They have plans to put in moorings for 20 or 30 more boats as well as a new shower block and pumpout facilities. There are water points throughout the marina and the new moorings and some of the existing moorings will have electricity on the pontoons. Because they share the site with a boat manufacturer they have some problems in upgrading their electrical supply as this would involve digging up the busy roadways on site. In December each year Mark Nye organises the London Boat Show exhibits for Fairline, taking the boats there and putting the stand together then dismantling it all at the end of the show. This is a job he has done for many years and one that carries through to the end of January and occupies a period that might otherwise be fairly quiet. Just another aspect of his busy life as Marina Manager.