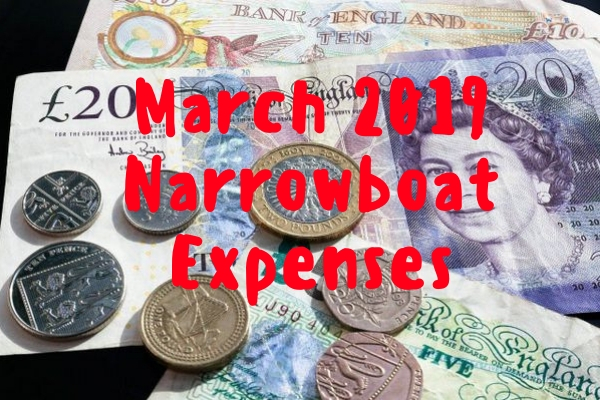 This is one of an ongoing series of posts detailing my narrowboat expenses. Each post breaks down my monthly costs for the previous month, the same month three years earlier and a third set of figures for three years before that. As a Narrowbudget Gold user, you will always have access to the narrowboat running expenditure no more than a month old and you’ll be able to compare it with data which spans six years. You’ll be able to use this information to estimate the likely cost of buying and maintaining your own floating home.

Calculating accurate costs for the boat you intend to purchase is difficult. There are so many variables that the best you can hope for is a good idea of the expenses involved and the nature of the variables you need to consider. Even on the two similar length boats I have owned over the last decade, the running costs have varied signifficantly. With that in mind, I have explained the difference in the two boats’ systems, style and design in the series’ first post here.

Engine Hours This Month: None

Getting Rid of Unwelcome Visitors

Phew! This was an expensive month. I ploughed every spare penny into the refurbishment of my beloved boat, transforming her slowly from an abandoned eyesore to a fully specified live aboard narrowboat.

Tools and fenders: I added a couple of tools to my onboard kit; a pair of mole grips and some bolt cutters. The mole grips saved the day a couple of months later when I lost a windlass, a recovery magnet and my spare windlass in the canal’s murky depths. The last windlass disappeared when I tried to juggle my essential lock key and a mug of hot coffee while negotiating a lock’s narrow balance beam. I was in the middle of an eight lock flight at the time. I used my mole grips as a windlass on the remaining four locks. It’s not a method of paddle raising I recommend.

Bolt croppers are handy for removing any metal which snags the propeller. I invested in them after spending an hour removing a submerged mattress from my boat. £34.82

Traffic Film Remover: TFR is very effective for removing stubborn stains and stove tar from your cabin paint. Twice as clean for half the effort so it’s worth the investment. £15.95

Inverter: An inverter is part of your boat’s power management system. The device converts the DC electrical charge stored in the battery bank to AC so that you can use mains appliances. Pure sine inverters are better for sensitive electronic equipment. This model was a Sterling 1.6kw pure sine inverter. I couldn’t run power guzzling devices like irons or electrical kettles on it, but it was powerful enough for all my day to day needs. £360.69

New flooring: I’d had enough of James’ threadbare and filthy beige carpet. I replaced it with easy care oak effect laminate flooring. It looked great and sounded awful. One of the dogs, springer spaniel Charlie, paced up and down the boat constantly. His claw clicking drove me mad. £640

Solar Power: An essential addition for an off-grid lifestyle. This 300 watt array with its MPPT controller catered for all my electrical needs for most of the year. Input fell to about 10% of the summer high during short and cloudy winter days. Then, I had to run my engine for 60-90 minutes a day to keep my battery bank fully charged. £1,000

Recovery Magnet: This is a marvellous device. It’s compact and powerful. The magnet can lift 50lb, more than enough for anything you might drop in the cut. Apart from the magnet itself. This is the one I lost between windlass drops which resulted in me using a pair of mole grips to work through a lock flight. A word to the wise; if you have novice crew on board, check their knots. £25.99

Fire Protection: All narrowboats now need a Boat Safety Scheme Certificate. James had been tied to its marina mooring since the scheme was introduced. I needed to make many changes to get the boat through its first exam. One of the more basic requirements was to ensure that the correct fire fighting and detection equipment was on board. I purchased a smoke alarm, a fire blanket and three fire extinguishers. £82.90

Additional leisure batteries: James had just one 110ah lead acid battery installed for the domestic supply when I moved on board. And that one didn’t hold a charge. I didn’t know my arse from my elbow when I moved on board. I didn’t know how much power I would use, how many batteries I would need to cater for that demand or the best way of upgrading my battery bank. Adding batteries to an existing bank isn’t a good idea. If you have a bank of different aged batteries, when the oldest fail they take the newer one down with them. The accepted wisdom is to change all batteries in a bank at the same time. In my ignorance, I added two 135ah lead acid batteries to my existing bank. £233.70

Coal: James wasn’t an easy boat to heat. Polystyrene sheets were sandwiched between the pine cladding and the treated plywood cabin sides and top. Spray foam insulation is much more effective method of heat retention. The cabin’s exterior ply had deteriorated badly. I had the complete cabin over plated with steel. I had more polystyrene sandwiched between the original cabin and the new steel. In hindsight, and what a wonderful gift that is, I should have used sprayfoam instead. Polystyrene can crumble and leave cold spots, bare patches which showed clearly on cold winter’s days when the cabin heat quickly melted the roof frost on unprotected areas.

I used roughly ten 25kg bags of coal briquettes each month. I purchased ten at the beginning and ten at the end of the month. £215.60

Mooring fee: The charge to keep your boat on a static mooring is likely to be your biggest ongoing boating expense. Most marinas do not accept live aboard boaters. Calcutt Boats doesn’t, but they make an exception for members of staff. I had a discounted mooring, but the price I’ve quoted here reflects the price you would have paid, if you had been allowed to stay at Calcutt full time, in March 2013. As with most marinas, there was a discount available for a single annual payment. I couldn’t afford to pay a year’s mooring in advance so I paid a slightly inflated monthly rate. £258.00

Electricity: Because James was so difficult to heat I needed a second heat source. I used two 500w greenhouse heaters, one in the bedroom to remove the evening chill and another in my office space. Consequently my electricity bill was much higher then than it is now. £60.00

Gas: I use less propane gas these days too. I had an on demand gas water heater on board James for the first few years. I had it removed after it tried to cook me. The unit failed while I was showering. It failed to push the cold water supply through the burner fast enough. The end result was a shower cubicle filled with scalding water. I escaped with most of my skin and a morbid fear of these types of water heater. I was using one 13kg cylinder every three weeks when the water heater worked. That dropped to one every six to eight weeks when I only used gas for cooking. £22.90

Please remember that this is not a typical month’s expenditure. James was an old and poorly maintained boat which needed extensive repairs and upgrades. Even so, March 2013 was an expensive month. Please read all the posts in this series to gain a clear picture of the costs involved in living on board full time.

Now we’ll move on to the running costs for the same boat three years later.

<p><img style=”display: block; margin-left: auto; margin-right: auto;” src=”https://livingonanarrowboat.co.uk/wp-content/uploads/2ACED6D8-18A2-4997-BCB8-38B3D3CFB153.jpg” alt=”Content locked” width=”600″ height=”600″ /></p>
<p>If you can see this message you aren’t logged in and/or you haven’t purchased Narrowbudget Gold. You can log in by using the form at the top of the right-hand column or by clicking on the Narrowbudget Gold/Course Login link on the menu bar. <a href=”https://livingonanarrowboat.co.uk/narrowboat-costs-explained/”>You can find out more about my low-cost information-packed Narrowbudget Gold package here</a>.</p>