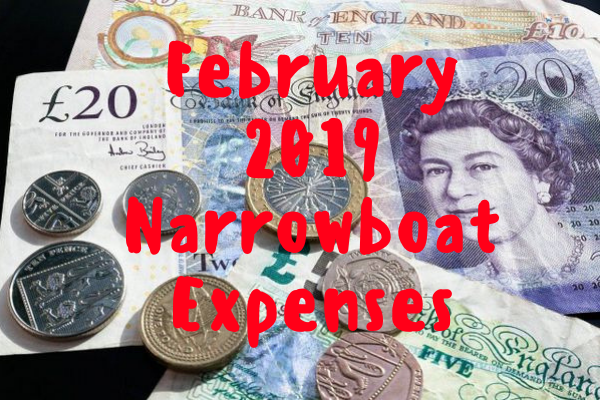 This is one of an ongoing series of posts detailing my narrowboat expenses. Each post breaks down my monthly costs for the previous month, the same month three years earlier and a third set of figures for three years before that. As a Narrowbudget Gold user, you will always have access to the narrowboat running expenditure no more than a month old and you’ll be able to compare it with data which spans six years. You’ll be able to use this information to estimate the likely cost of buying and maintaining your own floating home.

Calculating accurate costs for the boat you intend to purchase is difficult. There are so many variables that the best you can hope for is a good idea of the expenses involved and the nature of the variables you need to consider. Even on the two similar length boats I have owned over the last decade, the running costs have varied signifficantly. With that in mind, I have explained the difference in the two boats’ systems, style and design in the series’ first post here.

Engine Hours This Month: None

I’ve copied this text from the January 2013 blog post detailing my running costs.

“This year (2013) is going to be an expensive year for Sally and I. We have a huge amount of work to do to get James up to scratch. I’ve had some of the more major work done already. In November 2011 I replaced the old perished leaking and rotten wooden top with a new steel cabin. Actually, I didn’t replace one with the other. I had the new steel added on top of the existing cabin, and added another layer of insulation between the two. Removing the existing wooden cabin would have meant destroying much of the woodwork inside the cabin. James is beautifully fitted inside. Removing the woodwork would have been a tragic, almost criminal waste.

The new steel work, transportation and remedial work cost roughly £10,000. The transport alone was £1,100 for a delivery to and collection from a boatbuilder just eight miles away. The boatbuilder didn’t have any lifting gear on site so the road haulage company had to provide a crane too.

In April 2012 I took James out of the water to black the hull. Two days of dirty, back-breaking labour saved me the £500 that I would have been charged if I had asked Calcutt Boats to do the work for me. After James was put back in the water, I took her into one of our paint tents, took three weeks off work and painted the rest of the boat. It was a frustrating but ultimately rewarding project which resulted in a half decent finish and which saved me a fortune. As a ball park figure, you can bank on £100 a foot to have your boat painted by the professionals. James, at 62?, would therefore have cost me over £6,000 for a “proper” job. As it was, the cost of the materials plus the hire of the paint tent was under £1,000.

So I started 2013 with steelwork to the top and to the bottom of the boat with a decent layer of paint. The hull needs doing every three years so I next need to do it mid 2015. The cabin should last five or six years at least if it’s looked after properly, which brings me to January 2013 and my expenses for the month. Here they are…

Electricity: Each mooring has a 230v electrical supply which is charged at 20p per unit and topped up cards available from our reception.  I generally buy 3 x £10 electricity cards at a time.  I bought cards twice this month. My electricity purchases should be significantly reduced in March when I have the solar panels fitted. Time will tell.  – £60

Gas: I should have known better. I ran out of gas in January. I have two 13kg propane cylinders in the front gas locker. When one runs out I usually buy a replacement on the same day. I forgot in December so when the smell of gas alerted me to the fact that the cylinder in use was on its way out on a bitterly cold January morning, I scrambled out of the boat to the gas locker to (I thought) quickly switch from the empty to the full cylinder. Both were empty so there was no morning cup of coffee, and no toast. I wasn’t happy. Consequently, I bought two cylinders later than day. – £45.90

Maintenance & Repairs: There were no maintenance and repair expenses as such in January, but I did make a purchase to help me when I’m out cruising. I bought a folding bike. Folding bikes are very handy for getting to and from the local shops, or returning to a parked car so that it can be brought to the boat’s current mooring. You can pay £500 or more for a new folding bike. The one I bought was being sold by the owners of a narrowboat we have on brokerage. It’s very comfortable, but basic Apollo folding bike from Halfords. The list price is £149 but this one has had Derailleur gears added. The cost to me? – £65

Heating the boat increases my monthly outgoings during the winter. In January I spent £108 for coal and about £30 more than I would during the summer on electricity. The increased electricity cost is due to two 500w Dimplex Coldwatcher greenhouse heaters that I use to provide additional heat towards the rear of the boat where the stove’s heat can’t reach.

Of course, the boat expenditure is only a part of the cost of life on the boat. Here’s what we spent on our day to day expenses in January

Internet: I use the excellent mobile broadband dongle from Three. For the last two and a half years, since my bankruptcy, I have been using the Pay As You Go option because my credit rating wasn’t pretty. The PAYG service costs £25 for 7GB per month. I’m connected 24/7 as I’m aditing the site early morning, on breaks from work through the day, and in the evening. Sally has an iPad. She’s online quite a bit too. Consequently, we often ran over the monthly allowance. Over the last 12 months I’ve been trying my luck by attempting to order a dongle on a 24 month contract. In January I was successful. My mobile broadband now costs me £15.99 a month for 15GB rather than last year’s average of £29.69 a month. – £15.99

Telephone (Mobile): Sally and I both have mobiles on contract and Sally has an iPad, also on contract – £115

Eating out: We enjoy a coffee in a cafe and the occasional meal out. In January we had a meal in local pub, a fiery chicken feast in Nandos in the Bullring, Birmingham and a coffee in a canalside cafe – £81.60.

Entertainment: I love to read. I love my Kindle. It’s so easy to finish a book, use my laptop to browse through the Kindle books on Amazon, click a button and open my new book within a minute or two. I don’t read as much as I would like because of the time I spend adding content to this site. However, I still get through three or four books a month. We also buy second hand DVDs from Blockbuster about once a month. The local store sells four for £10 – £32.50

Clothing: I try to spend as little as possible on clothing but in January I needed a new pair of wellies and a fleece hat – £58.49

My total none-boat-related living costs for January were £1,019.33 bringing my overall total for January to £1,512.13. I fear that the totals for the coming few months are going to be far more than that with the improvements we have planned but what a lovely boat James will be when she’s finished!”

Now we’ll move on to the running costs for the same boat three years later.