Good morning to you all and today’s weather looks like being the same as yesterdays, warm, dry and maybe a little bit of sunshine too. 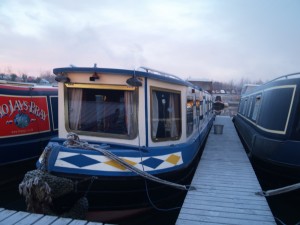 Yesterday was my first day off of four, I work 12hr shifts 4 days on 4 days off, and lounged in bed till about 7.30, I know I’m an idle person but somedays you need a lie in. Isn’t it nice now it’s beginning to get light by 7am and it’s not dark till 6pm gone, wonderful.

Breakfast consisted of red grapes, natural Greek style yoghurt drizled with local honey given to me by Jamie one of my work mates who keeps his own bees. I have a lot of common tastes but I think this is a breakfast fit for Royalty.

After breakfast I practised a little guitar, Paper Moon, Cheek to Cheek and a couple of my own songs then wandered up to the facilities block with my rubbish and ash bucket with just a couple of T shirts on as it was really warm, especially for the middle of winter. As I got to the top of the steps I turned round and looked out over the marina and again thought how lucky I am to have ended up here with this life style. Maybe I’ll be bored and fed up of it in a couple of years who knows anything for certain but…..

Having deposited the ash and rubbish and walking back listening to the birds, some singing and some just chirping I thought I should learn about the different bird calls so I could tell which birds they were. 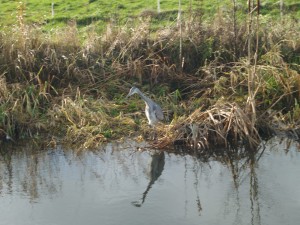 They still sound beautiful even when they are unknown. It was one of those days where I just felt quietly at peace with most of the world and my self too. So much so that with the warm spring like weather that after checking my gearbox for oil leaks, I changed the drain plug washer last week has it had perished and was leaking, putting fresh news paper underneath to see where if there are any more leaks, starting the engine up to charge my batteries I then got the sandpaper out and sanded down the wordwork in the bathroom ready to undercoat. I’m glad there isn’t a lot as after a couple of hours I get fed up and my enthusiasm and attention to detail tend to wear off. I did stop a couple of times but only to take my washing up to the laundry room and then again to change said washing to a drying machine.

The sun kept popping out and everywhere seemed so peaceful and quiet. Even when people are walking about and chatting it still seems so quiet and unintrusive especially when compared to out in the world. One of the other things I notice and love but keep forgetting to mention is the smells. Maybe it’s just me, no I don’t mean it’s me that smells, but the smell when you walk down the pontoons, the mix of water, wood the reeds and other things unkown which lend, to me anyway, a scent that says home. The different smells of the smoke from the chimneys and the one that 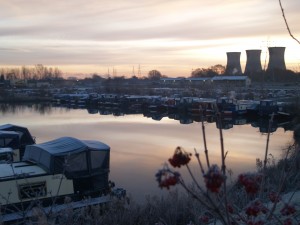 brings back memories for me from 40 odd years ago is the smell when opening the pram hood, when returning home, of the canvas and diesel from the engine sat beneath the stern, reminds me of the broads holidays we had when I was “no’buralad”. That’s were my love of boats started. With a broads cruiser and cruisers still hold a lot of charm for me though mainly the real wooden built one’s not the plastic one’s so much but there isn’t the space inside like there is in a narrowboat.

After a couple of cream crackers with cheese slices, the rubber processed cheese type, and a cup of coffee for lunch I checked the news paper under the gearbox and not a dop. However checking again this morning there is one tiny drop on the paper but not from the drain plug and not in enough quantitiy to be really concerned but will keep an eye on it. Finished the sanding and tidied up then changed out of my working clothes and decided a little reading would be in order.

I’ve got back into reading more since I’ve been afloat and don’t have a TV. I know I can watch online but I’m not really a TV fan anyway. I like books that have a spiritual and philosophical type of bent, I like Philip Yancy a good Christian writer but quite unorthodox. I’ve read a few by M Scott Peck who is a psychiatrist and psychotherapist and a very intersting writer he is too and some old things from my hippy days by Kahlil Gibran, Paulo Coelho and things of that ilk. But I also like Spike Milligan and Bill Bryson and I’ve just started getting into Stephen King after I found out he’d written the original book which they made into the film Running Man with Arnie in. There are a few holes in the plot at times but I have to give him his due I find him a really good story teller. I’ve only read a few but once I’ve started one of his they are very hard to put down and whether they are of critical aclaim or not a good story to lose yourself in is the mark of a good writer and I like things with a horror/Science Fiction feel to them as they make you think a bit sometimes.

I had a royal breakfast then a frugal dinner and now it’s time for a common tea of haggis, mashed potatoes and a tin of processed peas absolutely lovely it was even thought the haggis is a tinned variety from Aldi. It isn’t quite as good as a sort of proper one in a bladder but very eatable all the same and I’m afraid I love processed peas. I wouldn’t touch hardly any other green stuff when I was growing up especially cabbage and brussels yuk. My mother must have felt like throttling me at times. Mashed potatoes with salt while cooking then mashed with butter and milk and then whipped up with a fork to make them light and fluffy. Taken with a glass of Morrisons vintage still cider from the box, a cheeky little number.

A check through my emails and an hour trolling through ebay and things then a glass of Talisker, my favourite whisky, and back to Cell by Stephen King which took me a couple of hours to finish it and then to bed.

Not a very exciting day by everyone’s standards but I really enjoyed it. I stopped here and there on my travels and had a chat with people who’s paths I crossed some I knew and some I didn’t. I watched a moorhen walking down a jetty and looked up at the birds flying above and wondered if that one was an oyster catcher, we have some at the marina, or was it just a gull, I saw a cormorant glide up and perch on top of the electicity pylon in the next field which has a huge 100yd long puddle beneath it. The sun shone at times and we only had one short bout of rain which was quite heavy and coincided with Keith my next boat neighbour cycling home from work. The only rain we had all day caught him. I tried to suggest that maye that was lucky but his reply wasn’t really printable.

Anyway that was yesterday and I’m finishing this as the light is nearly gone today and it’s getting very close to 6 o’clock. The days are drawing out I’m glad to say. Oh and the pictures don’t really match with the post as they were took around Christmas time but it brightens up the post does a few photos.