Julynian – A Wide Beam Self Fit Out

We initially became interested in boating in 2003 when My younger brother following a divorce, decided to purchase a narrowboat to live on. After talking with him at some length about it Lynn and myself decided to look into it further. We did a lot of research on the internet and subscribed to a couple of narrowboat publications. Soon after we were pretty much hooked. We also walked the canals and spoke to boaters, and hired a boat for the day on a few occasions. It soon became apparent that a narrowboat would be too small for us, so we decided that a wide beam would be the answer but wanted it to resemble a narrowboat rather than a barge type canal boat.

My partner Lynn had some money put by from her divorce settlement, it wasn’t enough to buy even a lined sail away though, so we did the sums and decided to order a bespoke shell from a quality builder and do the rest ourselves.

We did a lot of searching but found a boat builder in Newark called R&D Fabrications. The owners were nice down to earth people, they had been in the business for 25 years + and had a very good reputation. We decided to go for a 60 f/t x 10/6 widebeam with a semi traditional style slipper stern. The boat would be supplied fully primed, wind and water tight, 13 Brass portholes, 5 Brass mushroom vents, 10 fender eyes, pole and plank holders and some extras like, 5 f/t pidgeon box, built in seat lockers, diesel bow tanks, S/S water tank , 6 marine batteries. The total cost including delivery to Keynsham £20,843.71 which included the supply of a Bubble Stove the boat yard ordered for us at trade price.

We placed our order in late 2003 and the build commenced soon after, the boat was completed to the stage required in March 2004 and delivered to us in Keynsham nr Bristol where we had arranged some hard standing to commence work on the boat.

Our initial plans was the fit out would take us 2 to 3 years. We resided in Dorset and would have to travel a 130 mile round trip to do work on the boat. All got off to a good start, we quickly painted the engine room and fitted the 2.5L Perkins diesel engine we had purchased separately and all the running gear. We also had a plywood floor fitted throughout the boat. My brother who’s an engineer assisted with the engine fitting which just took a couple of days. We then began the fit out by applying insulation.

We only had weekends to work on the boat. All went pretty well for the first 3 months, and we had reached a stage where all services were in place, insulated and the boat now needed to go on the water and be ballasted before lining out could begin.

We spent 6 months on a pontoon at the boatyard and then moved off the mooring to save the £80 per week cost. We had a lot of fitting out already done on the water by 2007 but complications with our business meant we couldn’t commit as much time to the boat. Also there was a problem with space. The majority of the boat was lined out and the 25ft long open plan saloon was near complete along with the bathroom so space became very limited. There were far to many tools and too much equipment to store in what little space remained so we decided to get it craned on to dry land to finish the fit out.

Unfortunately other problems then arose. Some family deaths and the recession meant family issues and keeping the business afloat took priority. Visits to the boat were few and far between for a good 3 years and little progress was made. Eventually with the downsizing of the business we got back to regular weekend visits around mid 2010 but it still took until June 2013 to actually complete the fit out and external painting. Part of the reason was with the saloon part of the boat mostly finished it was very comfortable and warm, so we decided to not set a time scale and just plod on at our leisure, it worked well, no pressure and here we are now afloat and absolutely loving it.

Would we do it all again. Definitely. Here’s a diary of our projject.

Construction begins with the Slipper Stern 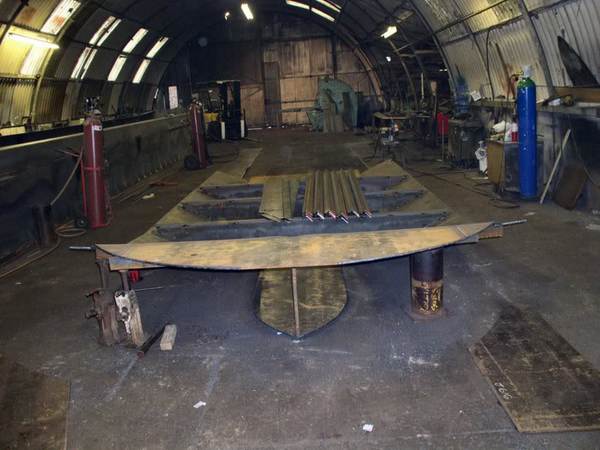 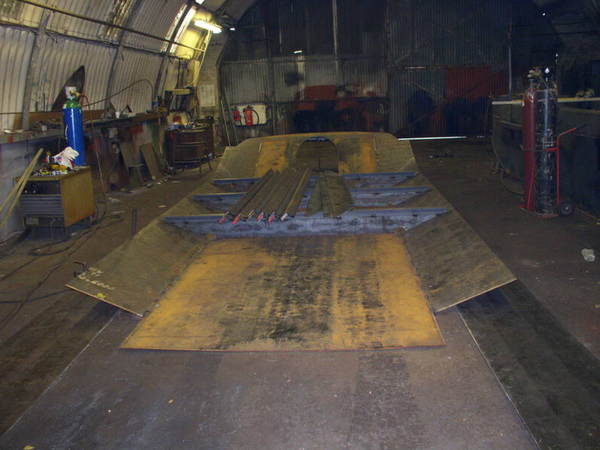 Our next visit a few weeks later and much progress has been made. 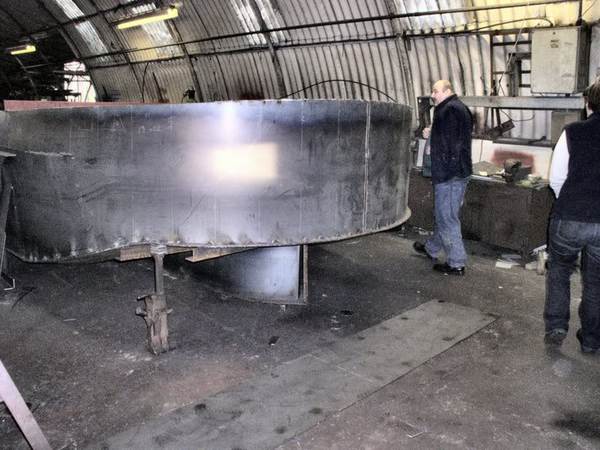 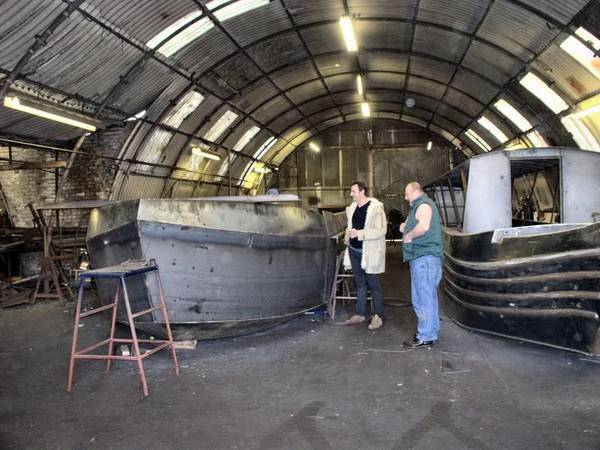 We purchased a steel 10/6/4 shell which included all portholes to sides 13 in total all external brass fittings, 5 mushroom vents pole and plank holders. We went for a stainless steel water tank under the bow also. We also had fitted 2 diesel bow tanks 93 litres each which incorporate seat lockers either side of the cratch. The rear diesel tank 300 litres. The main extra was the pigeon hatch 5ft long 3f/t wide opening either side with an additional 4 x 12” Brass portholes. 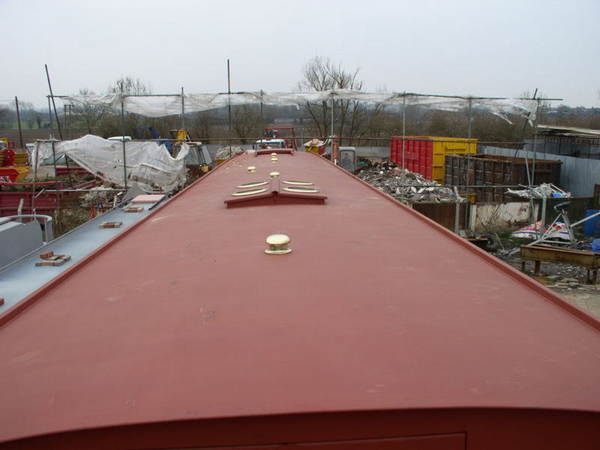 On completion the boat was delivered to Keynsham, Bristol in March 2004 by A.B Tuckey where it was situated on the back of a lorry trailer due to lack of space for about a month. 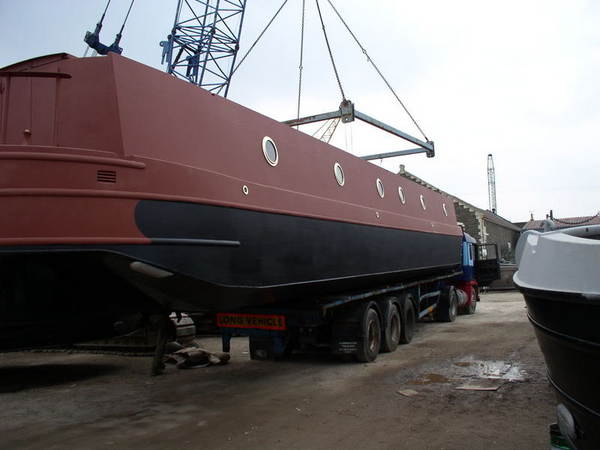 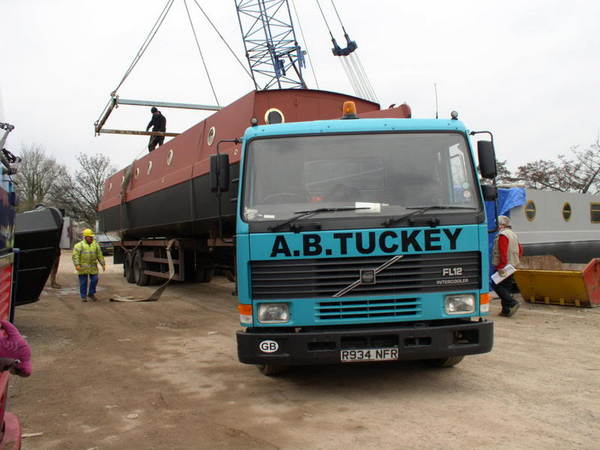 Our first job was to construct the floor all in 18mm plywood on 3 x 2 inch bearers screwed to the steel bearers and treated with wood preserver. Once this was fitted it created a big open space that was mostly filled with tools supplies and equipment for the ongoing fit out.

As we ordered shell only we had to fit the engine ourselves. The boat builder was given the engine dimensions and had the engine bearers welded correctly in place to accept the engine.

Fortunately having a brother who also purchased his narrow boat from the same company, is a fully qualified diesel engineer as well as an aircraft engineer, so this task was completed to very exacting standards successfully with no hitches. 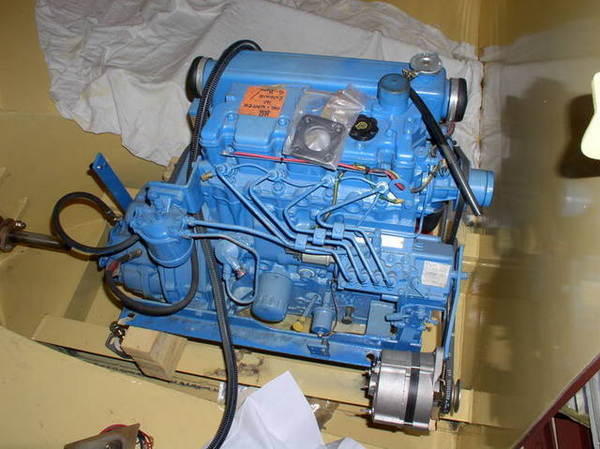 The engine a New Perkins 2.5 marine diesel with 2 x alternators. 50 amp and 90 amp. The 50 amp for engine battery and 90 amp for proposed 6 leisure batteries.

This was fitted in to the engine room previously spray painted cream by ourselves.

Above the engine is a false floor which can be removed in sections to gain full access to the engine and ample storage space around it. The boat builder makes the floor structure from angle iron that slots in across the engine bay secured with Alan bolts, to create a removable structure. We decided in standard decking to use as the floor for this as you can remove as much or as little as needed to access the engine compartment. It’s also nice and sturdy as this is where you stand to pilot the boat. 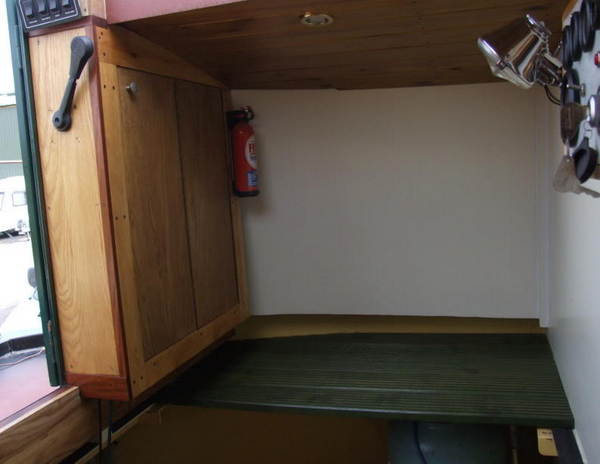 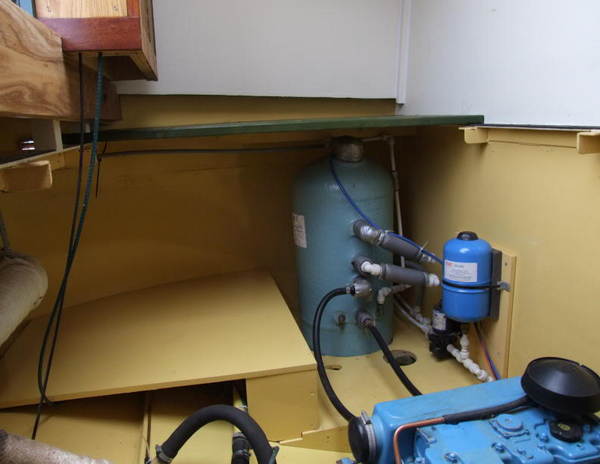 Having so much space in this area, it seemed the ideal spot for the Calorifier which is sunken into some plywood floor which levels out the slope of the slipper stern. With the pump and accumulator fitted close by, the installation of this and plumbing to the rest of the boat was pretty straight forward using modern plastic plumbing. The heating system pipe work was also fitted at this stage in readiness for the Bubble stove and radiators.

Then all the wiring was laid for ceiling lights and other 12 and 240 volt outlets. Most of the wiring supply will run under the gunwale and where the wiring is needed to connect to it’s appliance this will be set in place whilst the insulation is being fitted.

Once the engine and basic plumbing and wiring were fitted the next task was the insulation.

We considered spray foam, but it was very expensive, especially in the area we were in at the time.

After some investigation into insulation an expert on the subject suggested 50mm Rockwool with a Celotex vapour barrier. Celotex is spray foam but in pre sheeted solid form with aluminium foil backing each side. You can’t normally can’t get Celotex less than 1 inch thick, but manufactures use thinner off cuts from around 10 to 20mm thick to protect their normal sized product when palleted and transported for delivery.

My supplier set aside any 10 to 15mm thick sheets for us until we had enough to insulate the entire boat. With the Rockwool this gave us 60mm insulation of which 15% was Celotex spray foam which also doubles as a vapour barrier. So the battening was done in plywood to obtain the correct depth for the insulation. 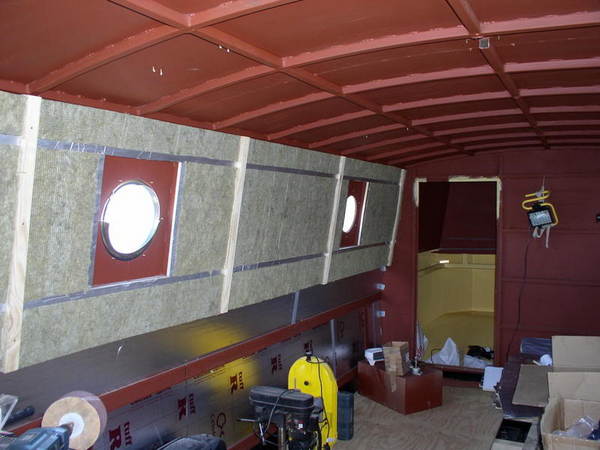 The above photo shows all the Celotex fitted on the Rockwool below the gunwale, this will all be sealed where necessary with aluminium foil tape to seal it as will the top sides. The aluminium tape will also cover and seal in all the battening.

The roof insulation will be left till last. As we will be paneling this in 110mm X 15mm T&G pine As each few strips are applied, the insulation will be fitted in the remaining gap to ensure it fits snugly and making contact against the steel roof. Also the ribbing has been filled with spray foam from DIY cans, this stops the hollow tubing from condensation and corroding from the inside out. 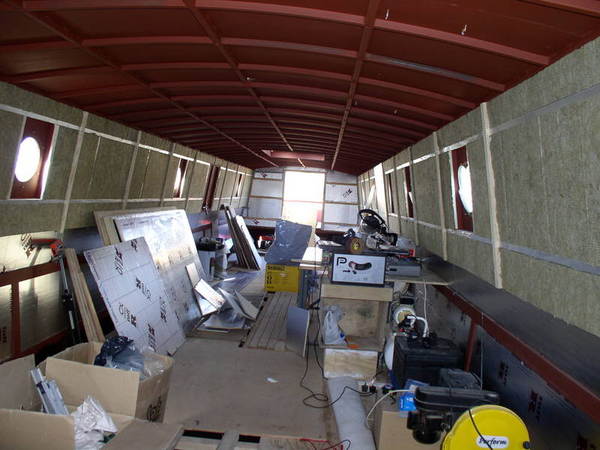 The porthole areas will not be insulated with Rockwool though, they will be having bespoke Oak liners made which will be screwed to the boat steel sides from the outside. This means removing the Brass portholes to drill through, but whilst doing so additional 6mm holes will be drilled so the porthole area can be injected with spray foam. When the Brass porthole is replaced, non of the holes will show.

All the above work mentioned was completed whilst the boat was on the back of lorry trailer. Fortunately the boatyard owner @ RLL boats let us have access to a forklift when needed. The hull also received another couple of coats of bitumen just for good measure. 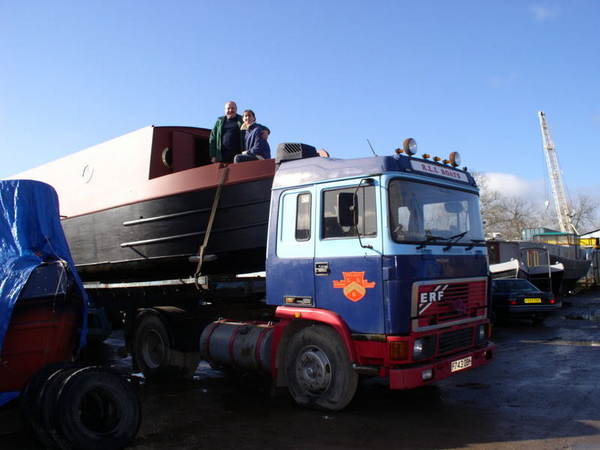 After about 6 weeks we were put on the ground and began installing the bubble stove and relevant plumbing. The 2 bow tanks were built in specifically for the stove. They are linked lower down by 10mm copper. But valves have been put in to isolate the bow tanks if necessary. All the pipe work to the rads has all been done just 15mm plastic pipes sticking up where the rads are to be situated.

Having only weekends to get work done, the progress thus far is pretty good. The owner of the boat yard needs space, so were going to be craned on the water shortly. Our next task is lining out.

The boat was put on the water in June 2004 using the site crane. 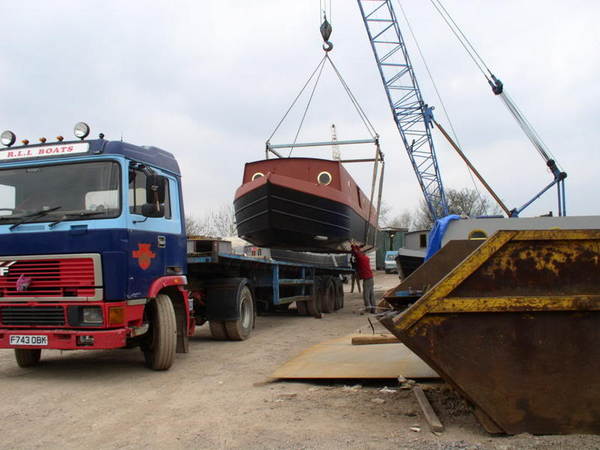 Julynian – A Wide Beam Self Fit Out Part 3

Julynian – A Wide Beam Self Fit Out Part 2

Julynian is our 60 f/t x 10/6 Widebeam boat, built by R&D Fabrications and purchased new as a steel shell in 2004 we have completely fitted the boat out ourselves from a steel shell including engine and running gear. We now live aboard full time and enjoying life immensely on the cut.