Of course I am most worried about the end coming early through ignorance, stupidity lack of money. I have met a few people on benefits who live on their boats in Marina’s and claim. I’ve never been too keen on claiming anything as I would rather work but working in my various industries seems to be all about lining the pockets of generally useless CEO’s and figureheads – which pushed me hard to seek something more worthy and worthwhile.

Skilled front-line and experienced teachers receiving 21k where figureheads receiving 140k is in my humble opinion an absolute disgrace especially when the organization purports to be a charity.

This new perspective is all part of this year off that I am hoping to make into two years off and then semi-retirement but I know these plans to be useless as only the practical application of living on a narrowboat including the reality of finances will decide whether it is feasible or not.

After all my flooding and mopping I feel in desperate need of a companion…some one who would have been able to make a brew, offer moral support and encouragement, someone who may have even been interested in donning a sponge for added mopping or at the very leasst interested in protruding their backside from the gunnel wall to tip the boat which would have assisted my mopping…I will leave you all to imagine that scene but probably the larger the backside the better – perhaps several backsides would assist, its all too much for one lonely solitary narrowboat owner to think about – ahem.

The delights of every where seem more attractive from (no not the gunnel wall) my narrowboat. Manchester who would have thought it has a certain beauty.

Probably best to start with Droylesden…by pictures dropping down the 18 locks towards Manchester: 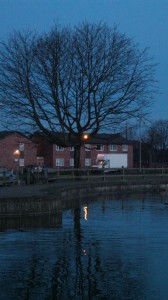 Droylesden looking good at 7 am and so I set off down the locks with a friend I had just made for a pie and a pint agreed to do the locks for me with a keen spirit. 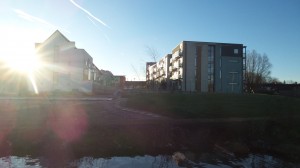 Early morning scenes at the top whilst in Droylesden 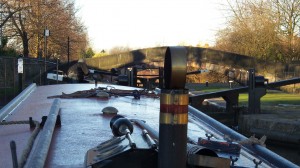 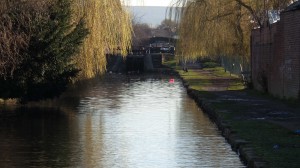 Some great scenery despite the accumulation of rubbish. On a windy day I am told much of the rubbish on the local streets ends up in the canals but none of it deters from the amazing images captures from the water, its all part and parcel of the canal system.

I have to reflect on the journey, never a dull moment but the boat does what the wind tells it and seems remote from the tiller and/or push of the prop in heavy winds…don’t try and work against it I am told, work with it…which, the boat, engine, wind or tiller, oh right I say – work with it, I see – not seeing at all.

Working with or against it – ‘it’ seems to decide as I make my way and the scenery becomes more city-like:

…and then in the distance the city takes over…but tow-path signs tell me I am but a few miles from previous countryside views 0- I think about retreating…. 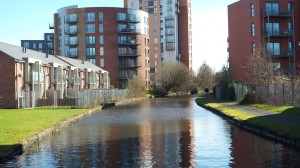 Who would know it…its all so built up and starting to get noisy making the engine sound quite positively quiet, so quiet it wouldn’t stand out in a chapel. 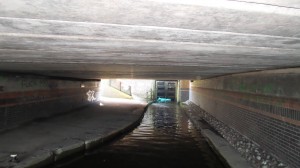 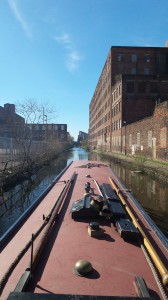 Ok, maybe it would but not an inner city chapel.

Then suddenly…there is a certain calm and a certain tranquility if only for a moment as I moor up in the New Islington Marina and without knowing it then get stuck here for 14 days – all assuming the parts for my pump come before Friday so I can be away Saturday. Perhaps this travel plan hiatus has a reason…time to get to know my boat and know what it needs to function well, time for me to familiarize myself with my own capabilities…I thing I do know is I have a list of questions to ask, I just have to find the right person to ask them of. 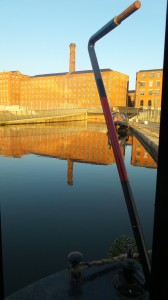