How To Find The Right Narrowboat For Sale

Five Top Tips Before You Look For A Narrowboat For Sale

It’s a sad fact that many people looking for a narrowboat for sale don’t know the first thing about narrowboats or the true cost of buying and maintaining them. I was very lucky when I first started out but since then I have met dozens of new boat owners who are totally out of their depth (excuse the pun!).

Here are some tips to help you make the right decision about your intended purchase.

The most important step towards finding the right narrowboat for sale is to find out the true cost of ownership. The price you see in the advert is far from the total cost of buying your boat. You need to consider the cost of having a survey done, what you’ll need to pay to have a survey done and how much any rectification work is going to cost you which is identified during the survey. You’ll need to make sure that you have a current license too. Here are the latest license fees from the Canal & River Trust web site. You will also need a current Boat Safety Scheme (BSS) certificate in order to license your boat.

One of the most expensive ongoing costs is your mooring fee. Unless you are a bona fide continuous cruiser constantly cruising the canal and river network, you will need an official home mooring. This can cost you between £1,500 and £2,500 each year. Sometimes twice that if you moor in or close to London.

In addition to your license and mooring fees, you need to consider the cost of insurance, BSS certificate, regular hull and cabin painting to protect the steelwork, coal, gas or wood for heating, diesel for propulsion – sometimes for heating too – engine repair and maintenance plus your normal domestic living costs.

I have spent several years recording my own costs and adding them to a guide. I’ve also developed the only budget calculator designed specifically for the narrowboat owner. You can read more about them here. 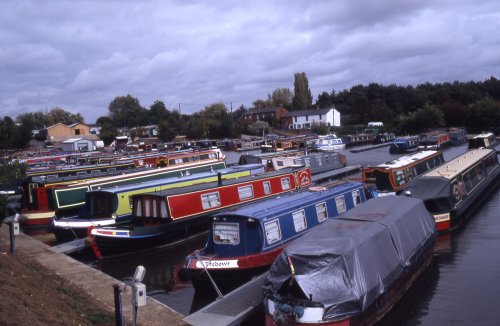 Before you look for a narrowboat for sale you need to be clear on the boat’s intended purpose. A boat designed for short term cruising has very different features and levels of equipment than one which is designed as a primarily static home.

For example, a boat designed for short term breaks usually has a large back deck where two or more people can stand and chat as they travel. This style boat is called a cruiser stern narrowboat. A traditional stern narrowboat on the other hand has a tiny back deck barely adequate for the steerer to stand in comfort. The space that is lost to the steerer and to his traveling companions who can’t join him is gained in internal living space, so a traditional (trad) stern narrowboat is usually favoured by owners who live on their boats.

The third most popular style is the semi traditional or semi-trad narrowboat. This looks like a traditional stern narrowboat from the side but the cabin roof stops 6-8 feet from the stern to allow standing space for two or more people. Semi trad stern boats often have a rear deck cover to provide additional storage space when the boat isn’t being used.

Maybe that sounds like you’re putting the cart before the horse but, trust me, finding the right mooring is very important. Your boat’s intended purpose will have a direct impact on your mooring choice. If you are buying your boat for recreational purposes you don’t have a problem. There are literally tens of thousands of suitable mooring advertised all over the waterways network. However, if you are going to use your new boat as a home, you need to think very carefully where you are going to moor it.

There are over 2,000 miles of connected waterways in England and Wales but although you can moor just about anywhere for periods between two days and two weeks, you can’t set up a permanent home unless the spot is designated as an official residential mooring.

Many current liveaboard narrowboat owners try to get around the two week rule by traveling backwards and forwards between two or more points in the same area so that they can stay close to their places of work. This is commonly know as “bridge hopping”. The practice was largely ignored when British Waterways controlled the canal network but since the Canal & River Trust has taken over more and more boats are being penalised or, in some extreme case, removed from the water completely.

Rather than moor on the canal itself (an online mooring) you may want to moor in one of the one hundred and fifty plus inland marinas on the network. Marinas tend to have more and better facilities than online moorings with nearby water and electricity points, pump out stations and Elsan waste disposal points, showers and laundry facilities. Unfortunately very few marinas accept liveaboard narrowboat owners. Some do, but not officially.

The internal living space on a narrowboat is very important on a craft with a maximum internal width of six feet and a cabin length even on the largest narrowboat of no more than 55-60 feet. My own trad stern narrowboat has a 48′ long cabin. The total living space area is about the same as the lounge in my old bricks and mortar home.

Many hire boats are sold at the end of their working life. They are seen as value for money and are often purchased by buyers who intend to live on board. Unfortunately ex hire boats aren’t very well configured for long term use for small numbers of people. They are designed to accommodate 6-8 people for just a week or two. Because they need to cater for a larger group of people for a short period of time much of the space is taken up by bunks rather than daytime living space. There’s often an additional toilet to further reduce the living space.

Another disadvantage of ex hire boats is that they often rely on gas central heating. Gas heating is very expensive to run and rather risky to use if the boat is to be your home. The gas heating system can break down, often when you need it most, leaving you with no heat source on board. Most well specified liveaboard or long term cruising narrowboats have a solid fuel stove as their primary heat source and then either gas or diesel central heating a backup.

There’s an awful lot to learn about narrowboats, what they cost to buy and maintain and which configuration is right for you. Fortunately for you, you’ve found one of the web’s most popular and comprehensive narrowboat sites. There are over 4,000 posts and pages on the site but there’s also a free 180 page guide for you to download. You’ll find the link to it at the top of the left hand column. Make sure you explore this site thoroughly before you look for your very own narrowboat for sale.