On Tuesday I took the Great Western train out west to visit my old friend Hilda B who lives in Somerton,  Somerset.  Unfortunatey, Somerton’s rail stop was eliminated many years ago and so the closest station is Castle Cary and from their you take a cab or bus.

Going at this time of year required navigating around the enormous Glastonbury Festival (which actually takes place in Pilton) for which Castle Cary is the closest train connection. By Tuesday the tsunami of rock fans had largely passed through leaving only a few dozen stragglers at the station. 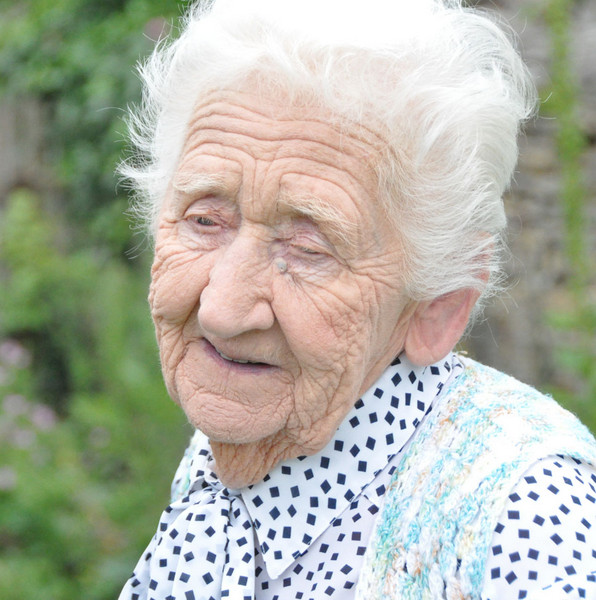 Stepping off the train, I was surprised at a host of old memories and feelings brought by by the rich green smell of the Somerset air.

I first met Hilda in 1985 — the year a small group of us Boulderites bought a holiday cottage in Somerton. At that time Hilda was just moving out of the thatched cottage in nearby Compton-Dundon where she had lived for many years, and into Council housing in the same village. Three years ago Hilda moved into Somerton and has now been in the same area 55 years.

Formerly a nurse in the town of Street, two miles north, Hilda’s life has since been a gradually slowing mix of gardening, visits from her son Julian in Devon and reading and needlework in the winter.

In talking of her various houses, she recalled the time as a little girl when the family lived near Bristol in another thatched dwelling. For the first time, the street outside was being paved and the equipment included an immense steam-roller which was, at that time, actually powered by a steam engine that threw out masses of smoke and sparks. Hilda’s jog was to perch on the roof top and sweep off any sparks that threatened to ignite the thatch. “Very nice thatch is” she said: “Cool in the summer and warm in the winter.”

Our conversation sparkled and wound through everything from The Rolling Stones to her parents life “in service”. Until her death, Hilda’s mother had been lady’s maid to Alice Clarke, of the shoe family in Street.

After a lovely lunch at the Lime Kiln Pub, we had tea at her cosy Council cottage and then it was goodbye and back to London. As I was leaving she said “So lovely to see you. I don’t think of you very often — but I do think…. I mean of you…”

It is so interesting where we find anchors in this wide world.