“I feel like I’ve been in a bubble these last 15 years — the world has passed me by — and passed by these skills.”

While we talked, he deftly carved off any useful meat from the ribs of the lamb, put it in a container labeled “sausage” and then held the whole rib cage, now hardly more than bone, back into place on the rest of the carcass to show us exactly where it came from (I never found out why, but inside the cleaned and otherwise hollowed out body, the two glistening kidneys remained embedded.)

Wearing a chain mail meat-cutter’s gauntlet on his “holding hand” Rich, the butcher at Bettys Farm Shop (“Home to 24,000 Chickens”) worked and talked with complete ease behind the meat counter of the store just outside Willington. His knives were surprisingly small, but perfectly sharp and moved with a smooth swiftness that personified the Zen metaphor of effortlessly guiding the blade of awareness through the twists and turns of a joint — rather than laboriously and futility hacking away upon the bone of resistance.

I asked if there were apprentices or students coming along to preserve the skills of creating various cuts of meat? Rich said there were — but not enough:  “Only two technical colleges in Britain specialize in teaching butchering — I mean, think of the expensive raw materials you need to practice on…”  I had just been looking at a chalkboard that advertised rib eye steak at 27 Pounds per kilo.

“Mass production meat cutting houses employ lots of people. But, there, a man does only one specific step in the process — and so never grows to know the whole and it’s not very rewarding. It’s just a job.

“Besides” he went on: “cutting meat is dirty work, and hard work, and cold work — most don’t want it. It takes a certain type — just look at me” and he grins with the guileless pleasure of someone who simply loves what he does.

Rich is a solid, fortyish sort of man wearing his dark-striped apron over two shirts against the necessary cold of his vocation.  “He’s not large, but probably does have just the right amount of subcutaneous fat” I thought later on…

I wanted to know where the meat was aged, so Rich put down his knife and motioned us to follow him back behind the counter.

“Come on then, come on — I’ll show you!” and we entered a bright, very clean, very cold room about 12 x 20 feet, with a fan-driven river of chilled air flowing ceaselessly past us — and past the neatly hung carcasses of three lambs, a couple of pigs, huge sides of beef  (one of which Rich would occasionally slap or half hug with affection) as well as assorted smaller cuts and boxes of sausages.

“Right here! He announces with pride: “We keep the room at about zero degrees (Celsius) because that produces the perfect internal meat temperature of 1-3 degrees for aging”.

As fate would have it, it was in the cooler that Rich indeed warmed to his subject — about which he is endlessly and quite generously knowledgeable.

“Where does your meat come from?” we asked. 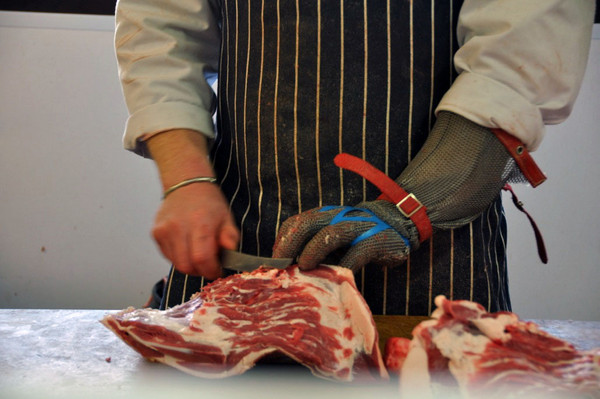 “Well” said Rich, “the lamb is from here (Betty’s Farm Shop Farm), the beef from the grounds of Calke Abbey, and the pork from a number of local suppliers — all meat coming through the Abattoir at Swadlingcote of course. He’s very good. It makes all the difference how an animal is killed — the more humane, the less stress and the less acid in the meat and the better the taste. That’s also why docile breeds produce the best meat — not running around excited and anxious all the time.”

No mention was being made of the 24,000 chickens right outside — so I assumed that the truly vast, keening and clucking flocks of poultry were mostly egg layers.

“Of course there’s the age of the animal too, right?  You know” he reflected  “mutton has a very bad, and undeserved reputation! Do you know why we are eating much more lamb than mutton now — when the opposite was true 50 years ago?

The more it SNOWS – tiddely pom…

“Because, back when wool paid well, farmers of course wanted to get in that second year of shearing, and so the animals came to slaughter at two years of age; the value of the wool exceeded the value of more tender meat.”  Rich continued expansively….

— that’s lamb between one and two years old, and then of course “mutton” which is from two year-old animals with both upper and lower teeth in. Actually, an animal tastes better the older it is — up to a point — because, the older the animal, the less water in its muscle cells and it’s this water that you’re trying to get out in aging. After a couple of weeks look how dark and lovely this beef is…..and smell how it has that nice, nutty aroma!”

He holds up a very large thick slab — and we smell.

“And then, of course they didn’t cut the mutton right — did they now?  There are, you know, three layers of fat — the subcutaneous- right under the skin, the inter-muscular between muscles, and the intra-muscular we call marbling. Well, a lazy butcher would cut his mutton too close to the skin and hair and so include fat that was filled with lanolin from the wool — that’s why bad mutton tastes like it does — you know…?

The more it GOES – tiddely pom

“Well….that’s why meat from “wool breeds” is best for the weavers, but not the butchers — we don’t like the hairy sheep, Scottish Highland and so on — less wool, less lanolin — right?

On snowing. And nobody KNOWS — tiddely pom

“What gives meat its flavor is the fat — even more than the age. If I denuded every bit of fat from this lamb, the meat would all taste pretty much the same from all parts of the animal!

“Also,” Rich gives the beef a gentle smack:  “after slaughter, meat must be cooled slowly  — to no less than 10 degrees C after 10 hours — because, the when animal is killed the muscle fibers contract and the aging process, if done correctly, lets the muscle tissue relax — but, if meat is cooled too quickly right after slaughter, the muscles stay contracted — which means tough eating.”

I just can’t seem to stop myself from asking:

“So how long does it hang in here…?”  my curiosity becoming tinged with incipient hypothermia.

“Twenty one to twenty four days — depending on the animal and the cut” he declares.

“Of course, a hundred years ago, they didn’t know all this science — the knowledge of how to raise, slaughter, cut, and age meat was passed from one generation of farmers and butchers to the next generation.”

How cold my TOES — tiddeley pom, are growing.

“Amazing” I stutter again — my vocabulary shrunken (and aged, I suppose) from the cold.

Rich stops and puts his arm around the side of beef.  “Yeah” he says, nodding thoughtfully,

The local butcher is certainly enjoying a comeback; however meat is getting so expensive that Sunday roast is fast becoming a luxury.

When I wer a lad in the sixties I used to work in butchers shop at the weekend.

Hygiene was nothing like today and the experience put me off eating meat for a long time.

I was talking to “the old farts” in the Weighbridge (That’s the name of their quiz team I wasn’t being disrespectful) and as a NB newbie they take pleasure in pulling my leg.

One chap was telling me that it is traditional to throw the last slice of bread out of the window and  good luck to keep an orange on board.

“Why” I said gullibly again

Because if you fall on hard times there will always be a big fat duck following you down the cut.

I’ll remember that. I’m particularly fond of duck (which may account for the slowly declining population of mallards at Calcutt).