Tewkesbury Marina has 400 flood protected berths, set in the beautiful Gloucestershire countryside. Located where the River Severn and Avon meet, you have a choice of cruising areas including the beautiful River Avon which meanders gently to Statford-upon-Avon. The larger River Severn flows down through Gloucester to the Bristol Channel and up to Worcester and Stourport. The Marina, with its extensive facilities, offers safe berths for family and guests to enjoy life afloat in a friendly and relaxed environment. 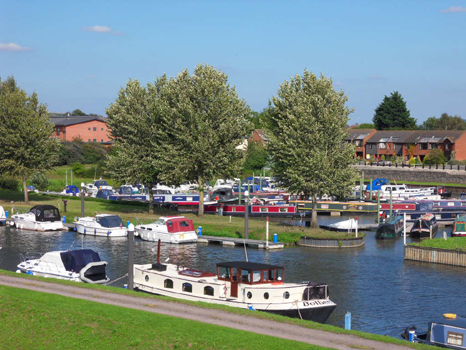 Stourport Marina is set in rural Worcestershire on the River Severn situated close to the M5 and M42 Motorways, 20 miles south of Birmingham and 3 – 5 hours from London. Convenient for cruising on the Worcester and Staffordshire canal system, 5 hours cruising from the from the river Avon and 10 hours from the Bristol Channel, giving cruising potential to the Welsh, Devon and Cornish Coasts.

There are 130 moorings designed to berth wide beam ocean going craft as well as river and canal cruisers. All berths are on a floating pontoon system with water and electricity points. The whole area has security fencing and lighting and is set in a landscaped gardens complete with a barbeque area for your personal use to entertain friends and family.

We have a popular clubhouse with a restaurant and bar. The extensive menu is based on good homely cooking and we offer excellent traditional Sunday lunches at attractive prices. The bar offers a variety of popular beers, lagers wines and spirits. The deck patio, our latest facility, over looks the marina where members can sit and have a meal or a drink while enjoying splendid view. On a warm day you could be anywhere in the world!!

After a days cruising, you can enjoy an evening dancing, disco, or light entertainment most weekends of the year.
[table id=100 /]

On the mighty River Severn, Britain’s longest river, lies Upton Marina, south of historic Worcester and north of Tewkesbury, Upton Marina offers secure pontoon and bankside moorings for all types of craft with hardstanding storage space and visitor berths, where you may take advantage of all the modern facilities you would expect from a large, well equipped, modern marina. It is also home to a fleet of holiday hire boats.

Cruising on the Severn offers a variety of itineraries since it stretches 58 miles from Sharpness to Stourport and forms part of the Avon Ring linking the Worcester and Birmingham, Staffs and Worcs canals.

It is possible to reach Stratford-upon-Avon and moor up opposite the Shakespeare Theatre. In fact there is hardly anywhere in the country that cannot be reached from Upton upon Severn by inland waterways. For more adventurous cruising southwards, it is a day’s run to the Bristol Channel and open waters. 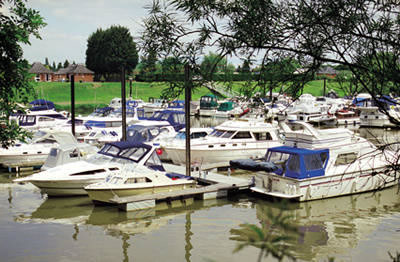 Upton upon Severn is situated on the river between Worcester and Tewksbury and therefore the stretch of river on which it stands forms part of the Avon Ring connecting the Worcester & Birmingham Canal to the river Avon. Just below Upton Bridge and opposite the attractive old town is Upton Marina.

It was developed in 1974 from a site that was known as the Brick Holes which had been used for clay extraction more than a century ago and had since that time been a pond. The marina had several previous owners and in 1988 was bought by the present owners Walton Marine. This is a private family owned company whose Managing Director is Mike Cook. They also own Walton Marina on the Thames and two other inland marinas.

The Marina Manager is Steve Arber CMM. Steve first worked in a marina as a holiday job while he was at university. He was attracted by the work and after he left university he went to work for a marina at Windsor on the Thames and to run the servicing and chandlery. After a few years he then went to work for Walton Marina and came to Upton as manager in the early 1990s. His interest in marina management led him to take a course that resulted in his CMM professional qualification.

Yacht Harbours Association has awarded the marina four gold anchors for the range and quality of its facilities. They have a licensed bar, restaurant, service and repair for both cruisers and narrowboats, chandlery, boatbuilding, slipway, 18 ton hoist, hard standing, electricity and water to all pontoons, telephone, broadband and satellite TV connections if required, diesel and pumpout as well as boat sales. The only facilities they don’t have are petrol and a launderette. However, there is a launderette close by in Upton.

Many of the marina facilities are run by tenants including the chandlery and cruiser servicing. Other businesses here are Starline Marine, who do narrowboat building repair and engineering, and Starline Narrowboats who are a hire boat company based in the marina.

The fact that the marina is on the River Severn means that it can be used as a base for canal, river and seagoing craft. They have 300 moorings at present used by a variety of boats from small river cruisers up to fifty foot seagoing boats as well as narrowboats of all sizes. The mooring rate is per metre but is capped at 12 metres so that longer boats only pay the 12 metre charge.

The marina is now full but planning permission has been obtained to double the water area of the site and to develop an adjacent holiday village. The present market trend is for large cruisers and narrowboats so that though the length of total mooring space will be doubled the greater proportion of these longer boats means that the total number of moored boats is unlikely to double. They are hoping to start work on the development this year.

The marina is flood protected by its system of floating pontoons that are kept in place by pile guides as the Severn can rise by as much as twenty feet. To counter the extra strain this places on the pile guides there is a system of sixteen anchor points in the ground around the marina that are used to secure a series of wires that go out to the pontoons from these deeply driven anchor piles. The whole system is designed to make this a safe haven on a river renowned for its floods. Looking at the well kept grass banks on a warm June day, and boats making leisurely progress over the gentle waters, it was difficult to imagine the huge rises in water levels that can sometimes occur.