There is no information about the moorings at this location on the company web site. If you own or manage Ashby Canal Centre and would like update your listing, please contact me.

Trinity Marinas is a well established narrowboat marina situated on the Ashby Canal in Leicestershire. Its Heart of England location, served also by a superb motorway network, makes it extremely accessible from all areas of the country.

Trinity Marinas is a large and well laid out marina with 114 moorings for narrowboats from 40ft to 70ft on sophisticated pontoons. With its modern facilities it can offer services second to none. 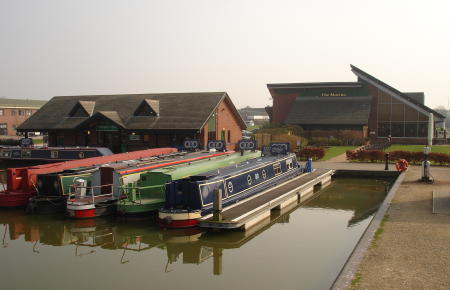 Trinity Marina is situated on the Ashby Canal giving access to over 38 miles of lock-free cruising, or more than 53 miles if we discount the stop lock at Hawkesbury. This fairly new marina was the dream of Bob Woodward, the owner of Trinity Motors and of the adjoining canalside land. He and his daughter Sharon Woodward planned and built the marina which was completed in 2001. It is Sharon and her partner Christine Dallas who run the marina business.

Christine has been a boater since her early twenties. Her first boat was a Shetland cruiser and this was followed by a wooden canal cruiser before she acquired a 50 foot ex-Weltonfield hire boat called Buttercup which she kept on the Ashby Canal for 4? years. She joined the company six months after the marina opened with a background in retail, commercial and marketing work which together with her boating interests made her a prime candidate for being partner to Sharon Woodward.

Christine’s first job was to fill the 120 berths in the marina with narrowboats, which happened quite quickly and they now have a 200 boat waiting list for moorings. After the moorings were full they started a second hand boat brokerage service and have sold about 130 boats in the 18 months it has been operating. The moorings all have electricity and water and there is a launderette, modern shower room and toilets on site as well as a shop and small chandlery.

Although they have no engineer on site they are close to Willow Park Marina that has these facilities and are in an area well served by marine engineers. In addition to the usual boatyard services such as diesel and pump out they are also the first marina to offer broadband internet connection – from ukcanal.com – which gives a radio link in the areas of the site that is available to subscribers to the service.

The development includes an a la carte restaurant and bar. They must have been impressed by the architect who designed their Watergate Restaurant as they are now using him to design the interiors of their range of new boats. The boats will be built using Graham Reeves shells and the fitting out is to be done by Ian Cooper at Aynho Wharf.

There are three different styles that people can choose from: Scandinavian range which will be open plan with wood finishes; Contemporary Chic range that is a modern design; and New England range which is more traditional. Having someone from outside the boat building business doing the interior design has produced some new ideas including, on two of the ranges, central island kitchens which are very unusual on boats.

At the time I spoke to Christine these plans were still in the design and concept build stage. They plan to produce 3 lengths in each of the ranges – 47, 57 and 67 foot. They will be standard boats with some customer choice within each style and will be available in Cruiser, Semi Trad and Traditional backs with a choice of three external paint colours. They were then making the final costings and aimed to start selling these boats in 2005. I was shown the plans of the nine different layouts – 3 lengths each in three styles.

For those requiring something less expensive than a new boat the brokerage service is there to provide cheaper options as Sharon and Christine “want Trinity to be something for everybody”. If you are looking for advice they have produced leaflets such as Are you Buying Your First Boat which set out the average running costs. This is a marina that boasts all the modern facilities and a community spirit.