We started the trip the way we intend to continue. SLOWLY.

As an instructor for the Calcutt hire fleet, I see dozens of professional types with their strict schedules and to do lists. The hassled hirers invariably arrive at Calcutt late because of last minute work obligations. They want to get the holiday started as quickly as possible so that they can achieve the goals they’ve set for the first day. Consequently, a relaxing narrowboat holiday becomes just another set of hurdles to overcome, deadlines to meet and problems to solve.

Sally and I decided that we were on holiday and that there was absolutely no rush. 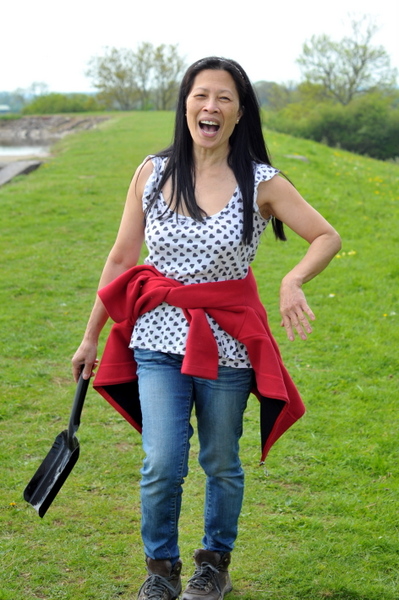 We didn’t get out of bed until 7.30. I’m normally up at 5.00am and Sally at 6.00am so our late start was a welcome change. We enjoyed our normal Sunday treat; eggs, bacon, mushrooms and tomatoes with honey smothered toast and a coffee or two. After breakfast we took Charlie and Daisy for a long walk via Calcutt’s wharf and the new decking area.

The marina office and adjoining lock cottage backs onto Calcutt Top lock. Between the cottage and the lock there’s a small lawn. Last winter we problem with water from the canal pouring in to the cottage kitchen. As part of the investigation to discover the leak, we had to use the site excavator to dig up the lawn. The work ruined the lawn so rather than seed or turf the area again, the company decided to install decking where both visitors and moorers could sit and watch the world go by. Sally and I love it there. We have two busy narrowboat hire companies half a mile away and Wigram’s Turn and Napton marinas. Calcutt Top lock is the first lock the hirers face if they’re heading towards Birmingham. The entertainment is first class!

We were finally ready to set up at 1pm. I realised that there were a few things I still needed for the trip so we pulled onto the wharf. Even though my (rather large) diesel tank was almost full I wanted to top it up completely so that I can work out how much Mercedes engine uses. I’ll top up again at the end of the trip in order to make the calculation.

In addition to the diesel I bought a plank and a second centre rope. With so many obstacles to snag a single rope if I try to flick it from one side to the other, it’s far easier to have a rope down each side. I also bought some oil, a new tin of grease and two bags of coal and a pack of heat logs. We don’t have central heating on James so, even though the forecast for the next week or so is clear skies and sunshine, the early mornings are still going to be very chilly.

While we were on the wharf, I used our house sized wet vacuum cleaner to suck out the water in the engine bay. I can’t work out where it’s coming from. I don’t think it originates in the engine bay. I think it’s running under the floor from the front of the boat. The water tank is under the front deck. There’s a 9″ length of hose between the filler cap and the tank. It has a split in it. The hose needs replacing but in order to reach it, the copper piping coming from the tank will have to be removed. It’s quite a big job and likely to be quite expensive. There are plenty of other, more important, things to spend our hard earned money on so it will have to wait. In the meantime we have to be very careful when we fill the tank that we don’t overfill it and fill up the boat instead. I suspect that the water in the engine room is a result in one or both of us not being as careful as we should.

I realised that I had another problem when we left the mooring. My new starter battery was flat. Starting the engine wasn’t an 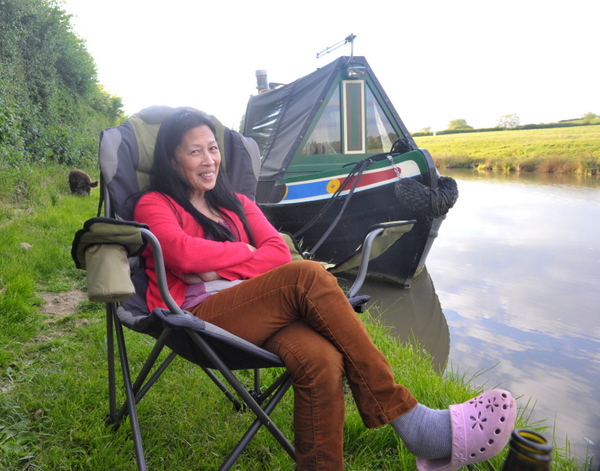 I know nothing about electrics, so I asked the guys on the wharf to have a look at my setup for me. Diagnostics wasn’t easy. The alternator should charge the starter battery then, once the starter battery is full, charge the leisure batteries. Because I have solar panels also charging the batteries, without some proper investigation it wasn’t possible to determine whether the alternator was working at all or whether it was just charging the domestic bank.

The cruise to Braunston was an absolute delight. Most of us in the UK talk constantly about the poor weather; overcast skies, drizzle, showers, heavy rain, hail, snow and strong winds. Even though we don’t have the same weather extremes eddured in other parts of the world, the regular dreary weather is very depressing. On the days when sun shines on the Engish countryside though, there are few better places on Earth. Sunday was one of those. Sunday was one of those days.

We reached Braunston just after 6pm. We needed to empty the Porta Potti so, as the water point was occupied, we pulled onto Midland Chandlers’ visitors mooring next door. The evening was beautiful so we took the opportunity to use Midland Chandlers’ picnic benches to wolf down a couple of platefuls of Sally’s delicious spicy Thai curry. 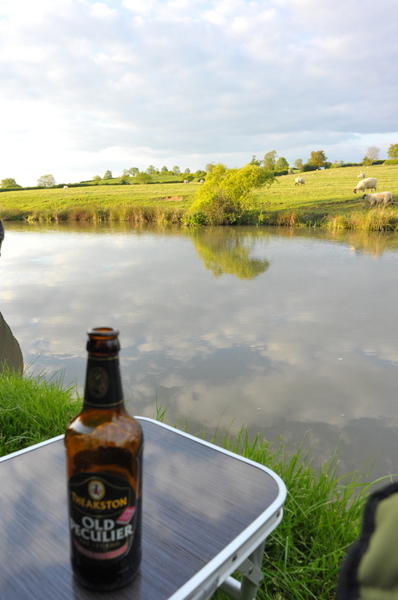 A beautiful spot to sit and relax

We left Braunston and found an idylic mooring within fifteen minutes. There were a few boats moored nearby but no signs of life. We had the towpath to ourselves. Just us, our new “garden” furniture, a bottle of the exquisite Theakston’s Old Peculiar for me and a bottle of cider for Sally, and an expansive view over sun kissed sheep studded fields. Who could ask for more?

Sound like a good start to the holiday, have fun and enjoy. We start tomorrow morning off down the Oxford to oxford and back.

Pail, if it will help I have expertise soldering copper and the gear to do it, give me a shout only too happy to help save the coffers.