My gearbox has been replaced, and my 20 hour service has been carried out.  We’re at Kate Boats at Stockton Locks, and there is now a crew of 6 family members including 1-year old Chloe on board, all ready for a cruise to Stratford.  All goes swimmingly, until…..

It is now the morning of my 61st birthday, and we’re about to set off from a mooring in Warwick.  Since my flood I am even more paranoid about water leaks.  I have now installed a seventh water-detector into the lowest point of the bilge, accessible through the small trap-door under the stern-step that I showed you earlier, but I still visually check it from time to time, and I did this morning……and there’s water there !  It’s just creeping towards the detectors’ contacts.

None of the other six water-detectors have indicated a leak, so I’m pretty sure the water is coming from the very back of the boat, and sure enough I find a drip from the elbow taking the cold water supply into the calorifier.

It is very difficult to reach and even more difficult to get a spanner to, so I ring Sea Otter Boats for advice.  They offer to come out to me, but it will be the next day.  They offer to pay for the job if I can get a local boat-yard to fix it.  I look across the canal and what do I see …..no, it’s not a mirage…..or an hallucination…..or an imaginary reflection of a previously visited location……..can it possibly be…….another Kate Boats !

I feel quite at home as I meet Molly and Cheryl again, and I duly push my boat across the canal (again ! ) into their capable hands.  Rob comes up from their Stockton boat-yard in the afternoon to look at my problem, but there is bad news…..the elbow cannot be tightened any more because it is already hard up against the bulkhead in the direction for tightening !  The calorifier will need to be, at least, loosened from its mounting, or removed altogether, and they daren’t start the job today in case they can’t finish it.  With 6 of us on board, including a baby, all requiring water, preferably hot, at some time or another over the next 12 hours, I don’t argue with that.   So I erect a drainage channel into a large bowl for the drips from the elbow, we play Monopoly, and we later walk to the Cape Of  Good Hope.  I wasn’t allowed to win at Monopoly on my birthday, but the pub was an excellent choice for the celebration, and it wasn’t as far away as the name suggesed.

I also took the opportunity that day to take a few photographs of the boat’s internals.

I believe in using any space available in a boat to the full, and I’m constantly figuring out ways of doing so.  But, perversely, I think one of the most useful spaces in a boat is……an empty cupboard!

There’s many a time that there’s a requirement for temporary and easily accessible storage, say, for a big bag of shopping (you just didn’t have time to unpack it before your friends arrived), or for a bag of rubbish (awaiting the next refuse point), or for that bag of washing (you’ll be calling to the launderette with it later this afternoon), or even for the kettle when you’ve folded down the cooker lid to provide extra work-top space.

So, with that in mind, this is my only large kitchen cupboard :- 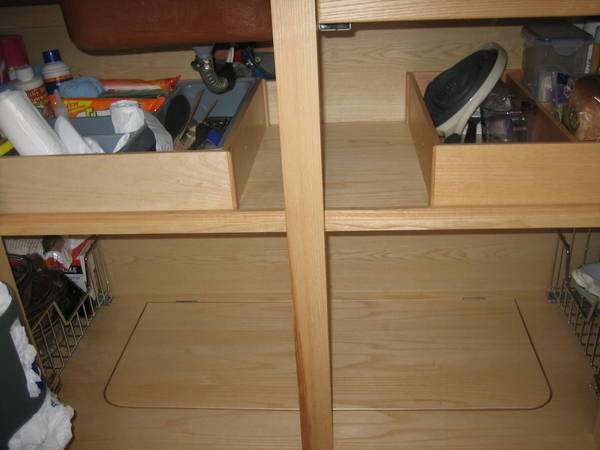 The two top wooden containers move from side to side on the top shelf, and so do the two chrome baskets (on runners) on the bottom shelf.  (They are just visible on the left and right of the bottom shelf.)  The lid for my tin-store under the cupboard base is shown in its closed position.

In the next photograph, of my open tin-store, the lid is hinged backwards and leaning against the side of the boat, and the wooden containers on the top shelf have been moved sideways to access other items. 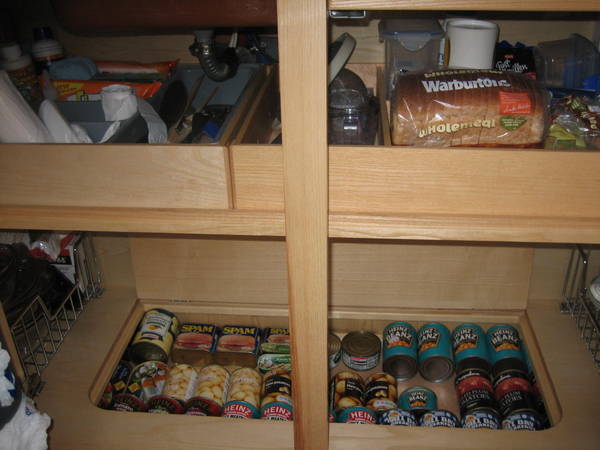 In another photograph, the top wooden containers have been moved again, to gain access to different items in the left-hand-one, and the tin-store lid has been lowered, allowing the chrome baskets to slide towards each other. 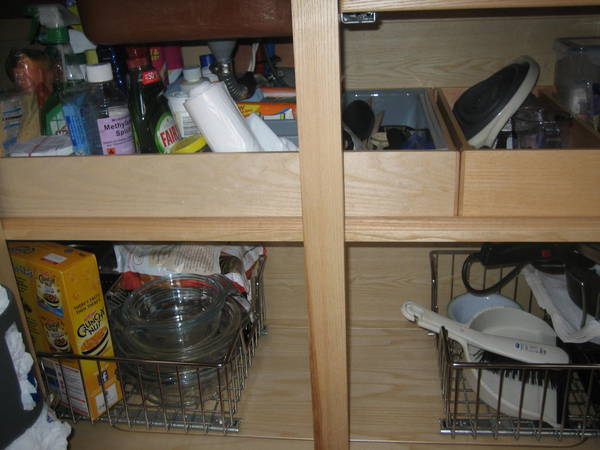 A storage unit (from B&Q) slides out from next to fridge, as shown in this photograph. 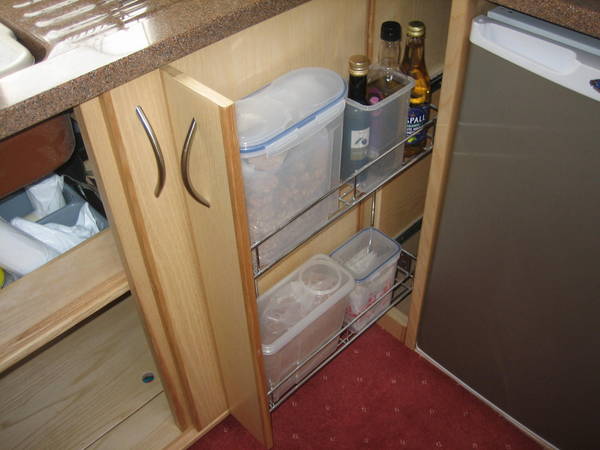 And a well-made “soft-close” drawer to the right of the sink, but normally hidden behind the right-hand kitchen cupboard door, is shown in this photograph. 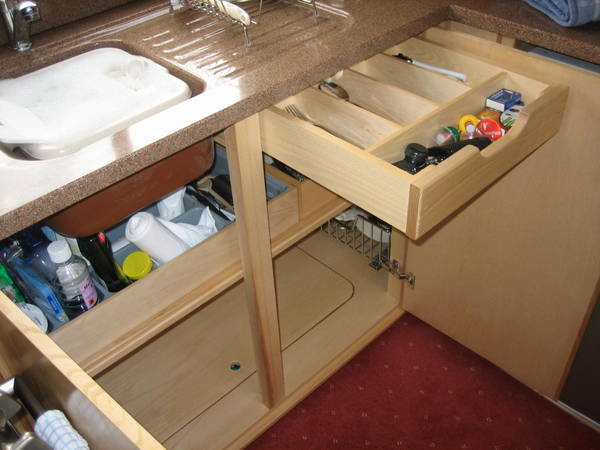 Like many kitchen sinks in narrowboats, this has no emergency outlet anywhere within the sink.  If a tap is left on accidentally, water will overflow the bowl and run along the work surface and eventually onto the floor.  I don’t like this.  This photograph shows my kitchen sink flood prevention scheme.

I have modified one of those microwave anti-splatter lids by cutting holes into the sides of the rim (not visible unfortunately), and it is ALWAYS kept under the sink bowl.  If water overflows the bowl, it goes down the sides of the bowl, and finds its way down into the plug-hole via the holes in the sides of the microwave lid.  As a final and audible flood defence mechanism another water-detector lurks in the background!    Paranoid ?   …..most definately yes.

Here is a photograph of my very large dinette table, which converts into a double bed utilising the back cushions :- 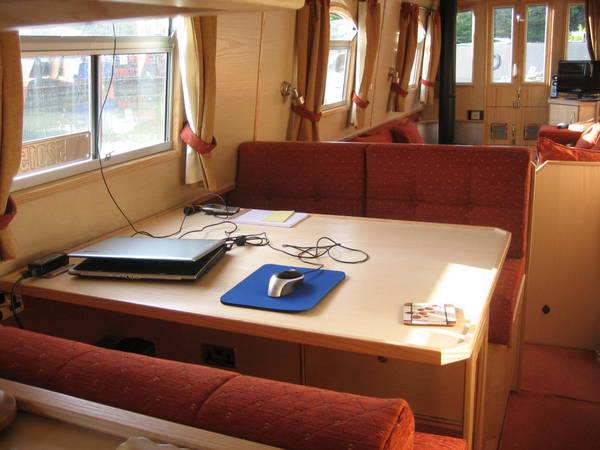 The under-dinette-floor wine & beer store keeps those valuables out of sight, and surprisingly very cool ! :- 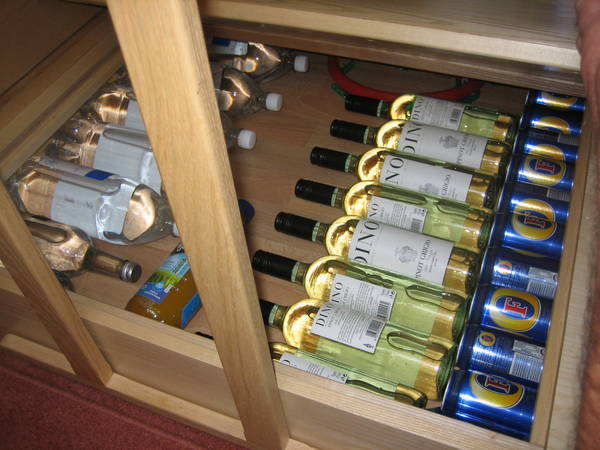 Another photograph shows the double rubbish bins pulled out from under one of the dinette seats. 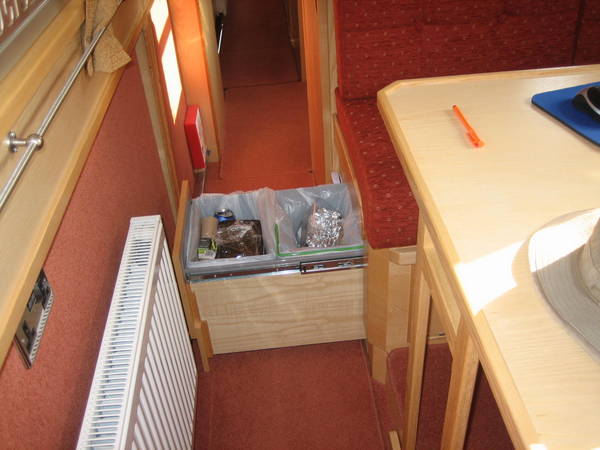 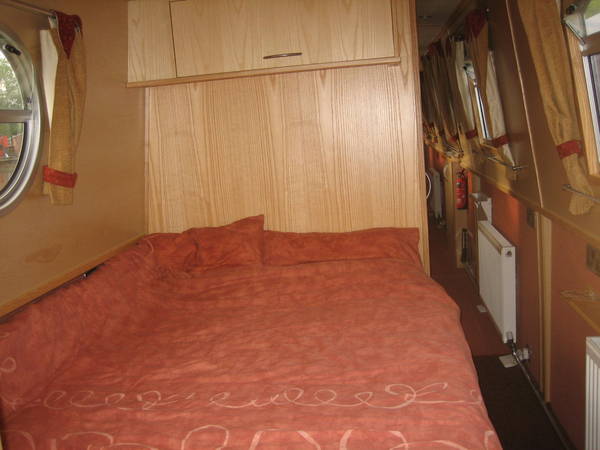 Chris arrives first thing, and drains the calorifier.  Mine doesn’t drain into the canal, but into the engine bay, so I spend my time mopping up.  Much more fun than using my bilge-pump and it’s a nice day to be outside.  He loosens it at the back, enabling him to remove the offending elbow, and re-seal into position.  The job is completed by lunch-time, I pay the £168.00 invoice, which Sea Otter Boats subsequently and very quickly refunded to me.   (It would have been possible for the calorifier to have been removed completely from the cupboard if need be.  Sea Otter built the cupboard with that in mind.)

I thank Kate Boats again for helping me out efficiently, again, at a time of need, and I feel a tinge of panic as I venture forth along canals that I know are devoid of any more Kate Boats boatyards. It is 2.00pm, and we have the two Cape Locks and the Hatton 21 to cope with before our next meal.

We eventually arrive at Stratford Upon Avon to a nice reception from John & Heather Dews, the very pleasant owners of Stratford Marina (01789 778358) and what a delightful location to moor up at….right by the river, grassy banks and picnic-tables to relax on, all within a minutes walk of pubs & restaurants, and five minutes to the town centre.  A very fine jewel in a very fine crown. 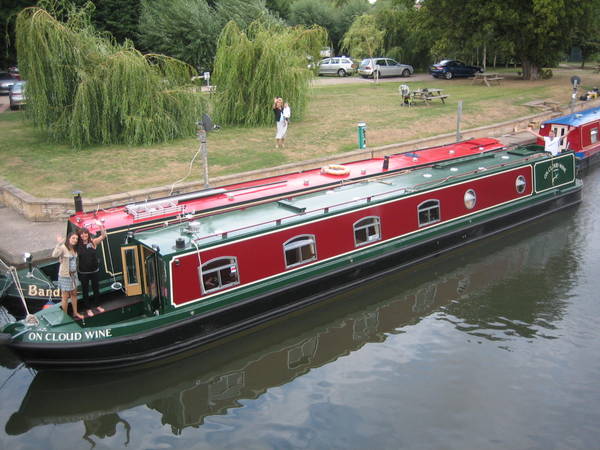 I realised I’d not checked to see if anything was wrapped around the prop since Crick !  So I did, and nothing was, which I think is perhaps testament to a good combination of the Axiom prop, the attached rope-cutter, and the shape of the hull.

I realised too that, despite the very shallow water that many other boaters had been complaining about on the way across country, I had never knowingly touched the bottom, or had any problems in mooring up against the sides.  Again perhaps thanks to the v-shaped hull, and the comparatively shallow draft of Sea Otter Boats.

The boat is booked into Stratford Marina for 9 nights, and I look forward to seeing how the boat performs at OVER 4 MPH on the Rivers Avon and Severn.

We amble along the river Avon, cruising for about 3 or 4 hours a day, and arrived at nicely spaced-out towns by about midday each day….Bidford, Evesham, Pershore, and Tewksbury.  Pershore was our favourite for general ambiance & the quality of its moorings and pubs.

Again, throughout this period in which the river levels were low, we never knowingly scraped the bottom even on the approach to locks, and nothing caught around the prop.

I’m touching wood as I write this.  Everything has worked perfectly over the last several cruising days.

We passed through the tricky manned Tewksbury lock yesterday, and today, now travelling against the flow of the river Severn, the engine needs to work harder.

I am very surprised how much extra throttle I had to apply to move up-stream at a reasonable speed just after turning wide onto the wider River Severn to avoid an unseen sandbank that the lock-keeper, and the canal books, had warned us about.

Today was to be the first in which my generator light showed green for any length of time, indicating that mains voltage was being produced at the higher engine revs required to cruise against the flow.

The boat behaved impeccably, and there was very little turbulence from the stern considering that the engine was running at about 2,400 rpm to give a speed of about 5 mph.

The tiller did vibrate a little more than normal, but there again it’s a little longer than tillers usually are.  Despite the higher revs, the engine temperature gauge stayed well within the normal range, possibly thanks to the twin keel-cooling tanks fitted.  The boat didn’t need steering at these speeds, it just went straight !

We make Upton Marina in a little more than an hour, and we have planned to leave the boat here for a couple of weeks.  Tingdene, who run the marina, are also Sea Otter agents, and  we have made a deal that permits me to moor at a cheaper than normal rate, in exchange for offering my boat for viewing by potential purchasers of a Sea Otter Boat while it’s there.

My next and final report covers the next two and a half years, and I tell of my particular likes & dislikes of my boat after living with it for quarter of a decade.