I normally call at Sea Otter Boats weekly but it has been almost 2 weeks since my last visit (because of the intervening Birmingham boat show) and the internal layout is well under way. 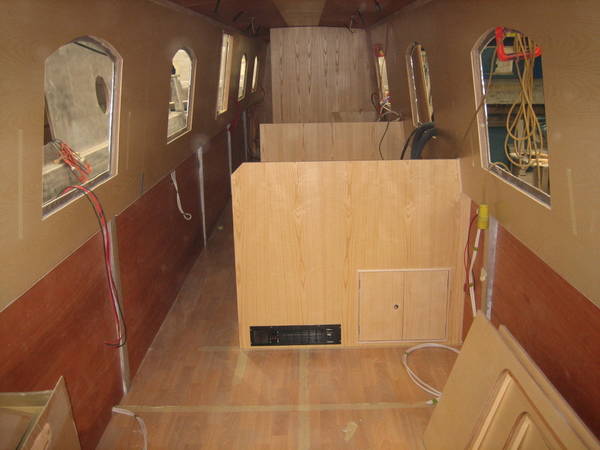 The 240v Dimplex fan heater that I supplied has been neatly fitted into the forward facing panel to provide fast heating of the lounge when plugged into the mains, very useful for that first hour when arriving to the boat on a cold winter’s day and before the stove is fired up. 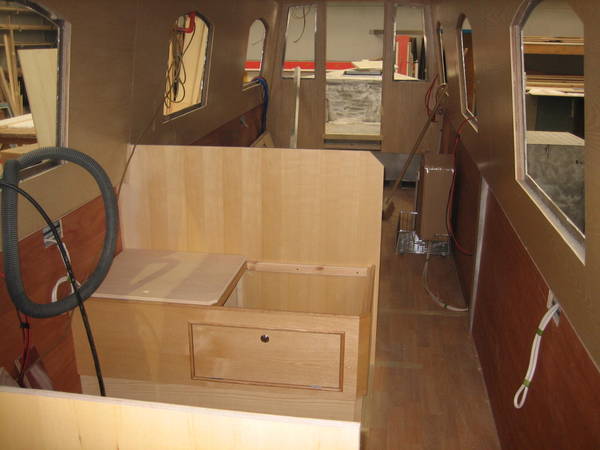 The main frame of the dinette has been raised by 7 inches since I last saw it, and access to all under-seat storage areas are now provided for by both doors AND removable top panels 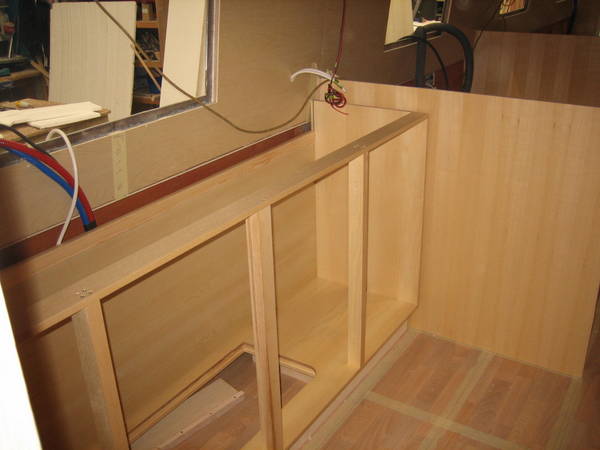 The main kitchen cupboards are under construction, and my tin-store is clearly visible under the central area of the kitchen unit base.  I need to tell you that here, there was a misunderstanding!  When I requested this storage compartment I presumed that Nigel & the team would construct it so that the tins would be laid on their side, so that the labels could be read….but no, it was constructed in order to take vertically stored tins !  (Paul tried to explain their reasoning for this by claiming that there are no labels on the tins from the very cheapo supermarket that they all shop in at Chesterfield !)  But everyone did agree that the additional height needed for vertically stored tins did raise the work surfaces to an unacceptably high level.  The base needs to be lowered, and I’ll be more careful with the descriptions of my requests in future.

You may just be wondering how my tin-store will accessed when the cupboards are fully laden ?……more later.

The gas pipe has appeared.  This has been run under the gunnels, and can be accessed with ease, as per boat safety regulations.  The fridge will be positioned with its back to the unused portion of that dinette seat back, on the right of the photograph, and the cooker will stand opposite it.

More work has been carried out in the dinette.  The least obvious is the installation of the dual rubbish bin, which has been fitted with great care & attention to detail, under the seating nearest the kitchen. 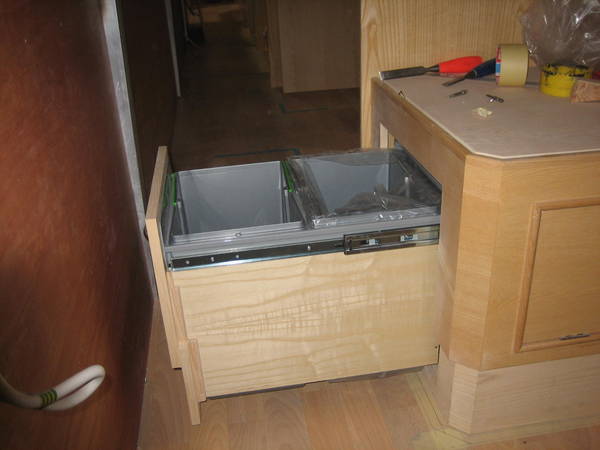 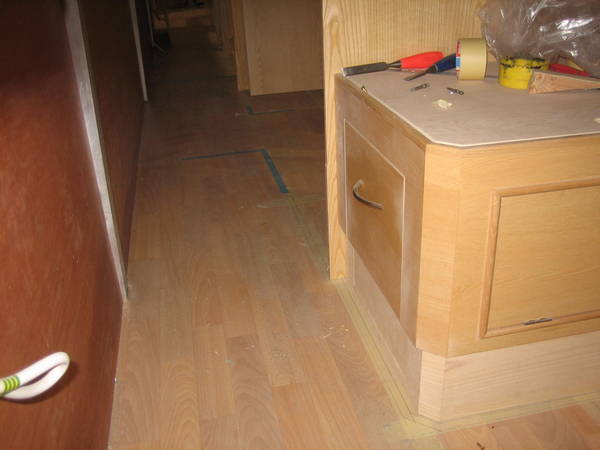 I am very impressed with the way the contours of the wooden bin front exactly matches those of the dinette base unit.  Also, the storage spaces around the sides of the bin are accessible either by the fold-down side-flap shown, or by the removable under-seat panels.  I don’t like wasted space.

Moving along the boat I see that the hole for the shower door has been cut out of the panel, and the piping installed.  The trace-heating is visible once again.  The shower pump is to be situated under the nearby vanity unit. 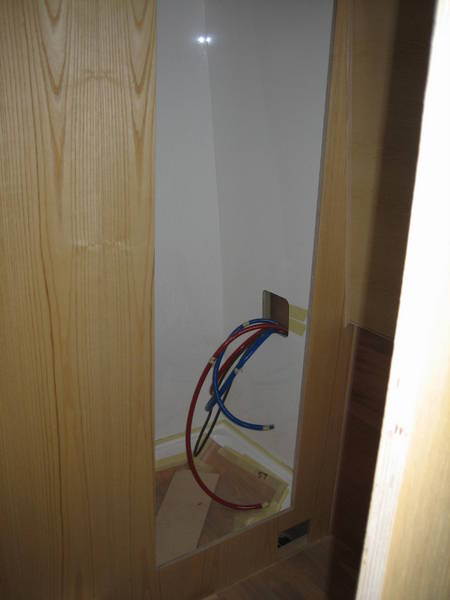 Arriving in the bedroom I see that the construction of the bed is well under way. 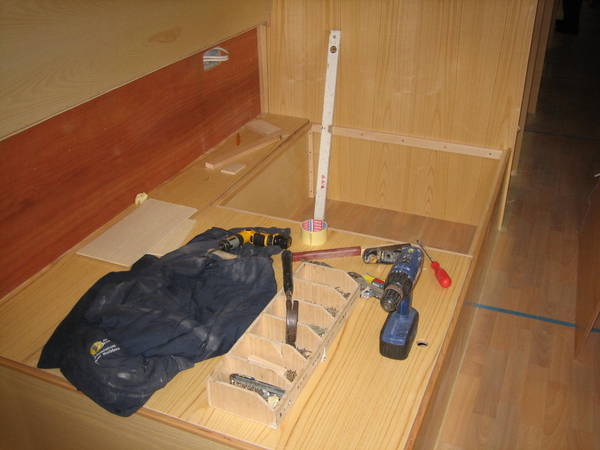 This bed is 4 feet wide, which we think is the widest possible if the corridor is still to be useable.  My last boat had a slightly narrower bed, perhaps 3 feet 9 inches wide, but it was extendable by about 6 inches, which did make a big difference.  We’ve decided we can sleep with 3 inches less width, and without the hassle of extending the bed.  Actually, pulling the mattress out by just a couple of inches at bedtime will make a big difference with very little effort.

There will be two large drawers under the bed.

As I leave Nigel is fitting the overhead cupboard :- 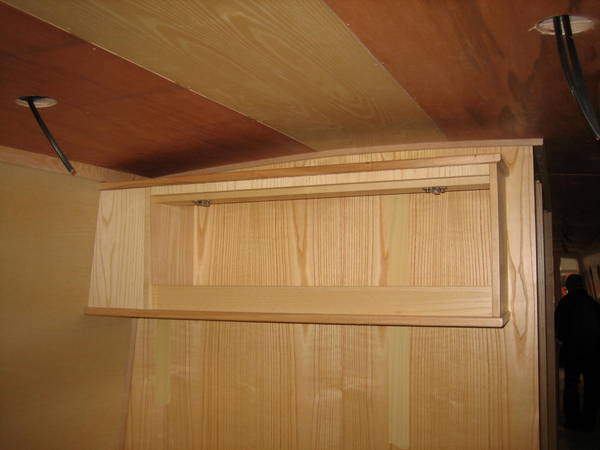 On another subject, Sea Otter do not fit TV aerials, because everyone wants something different, and many are subsequently updated, possibly leaving holes in the roof which need filling.  The aerial hole in my previous boat leaked, and you’ll know by now my views on drilling holes in a boat roof unless absolutely necessary.  My soon-to-be-purchased “LOG” aerial will be mounted utilising an aluminium tube soon to be welded to the front bulkhead.

Back again, and the radiators & associated pipe-work have been fitted. 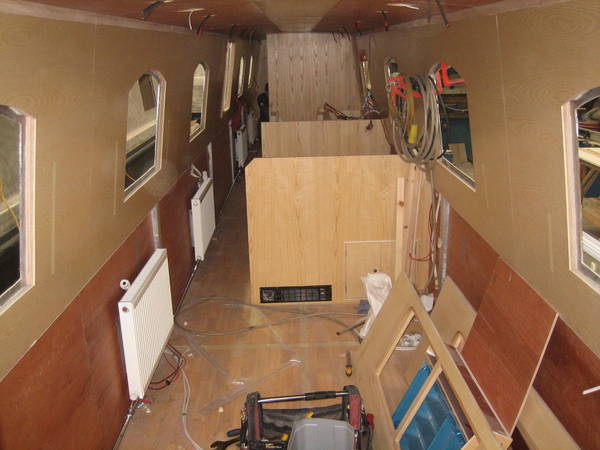 The 22mm chrome pipes will be exposed both as an attractive feature and additional heat distributors.  All the radiators & pipes will have to be removed again prior to the fitting of the carpet.

Another preview of the kitchen cupboard configuration. 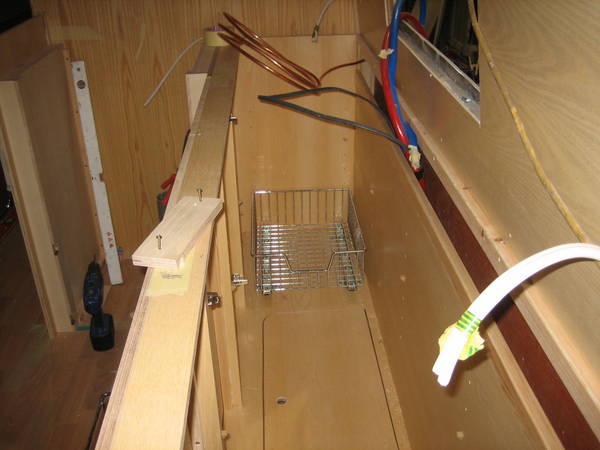 I sourced two sliding baskets from a firm called “Scotts of Stow”, part number 107 4748 @ £79.90 for two, and Sea Otter fitted them for me, one on either side of the bottom shelf of the main kitchen cupboard, above my tin-store, which has been lowered since my last visit !  The baskets can be slid across towards the centre of the cupboard to access all that is held within.  There will be a similar arrangement for the top shelf in that same cupboard, not yet fitted.  Both systems will help to maximise the use of the space available, and avoid “dead corners”.

Nigel has fitted an extremely neat bi-folding door to the front of the corridor wardrobe, between the bedroom at the stern and the bathroom door.  Without realising this, when fully folded in the open position, it will double up as a very effective privacy screen between the main bedroom and the rest of the boat. 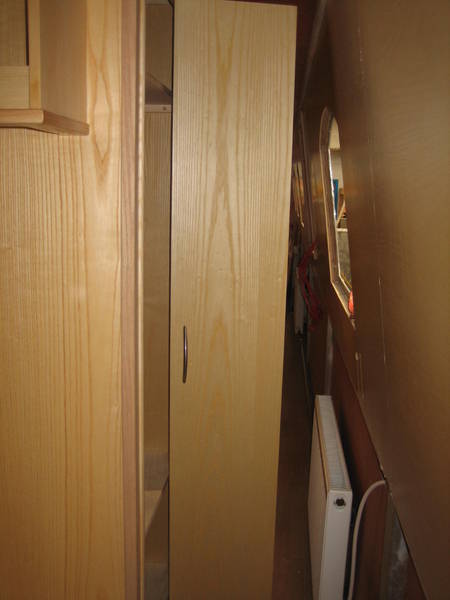 Another neat addition, my B&Q sourced sliding unit meticulously installed in the kitchen, next to where the fridge is to be. 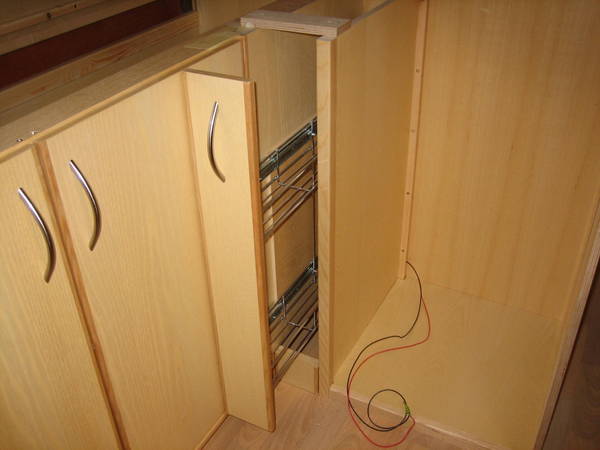 And useful storage provided under the dinette floor. 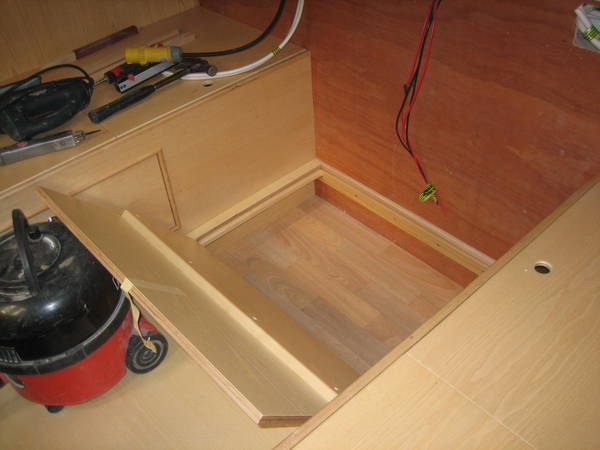 The Cassette loo has been fitted, and the vanity unit is under construction :- 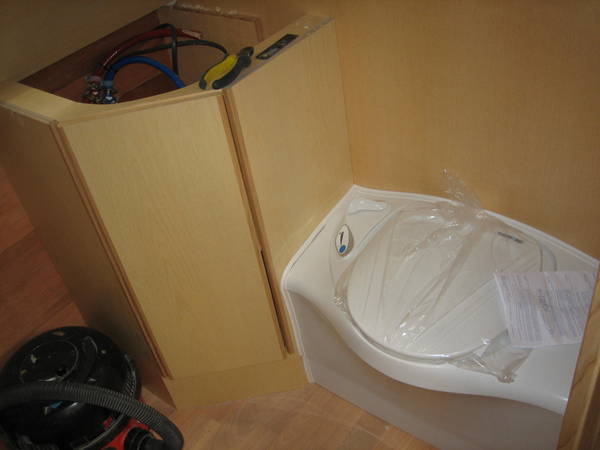 And the calorifier is tried for size :- 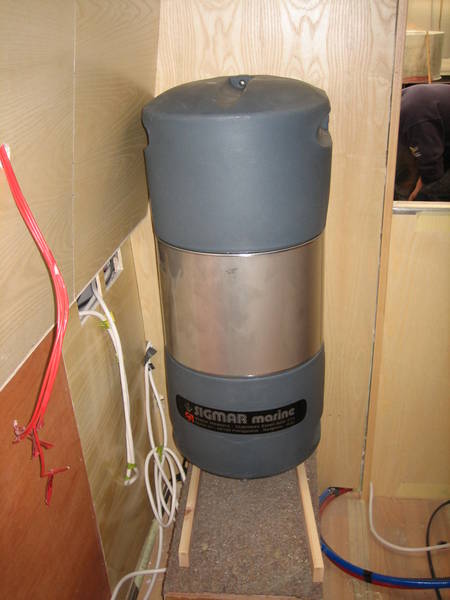 It is temporarily supported by a wooden frame at the height from the floor as recommended in the manual, to allow for space to replace the internally fitted immersion heater element if necessary.

My Nanni engine is due next week, and the electrician will be back on the job, so lots to look forward to in April as the completion of the boat proceeds.