I return again with my wife, because today is the day for choosing carpets, seat materials, and curtain colours, so lots of decisions to be made.

Paul had also previously asked about how I wanted the boat painted.  Today I give him a photograph of my old boat, which had red side panels with a yellow coach-line around, the rest of the sides green, and with red hand-rails and a green (anti-slip) top.  I liked the colours of that boat, and I still do.  “Like that”, I say.  Easy.

My new boat had been moved to a more convenient position closer to Nigel the joiner’s work-bench, parallel to another two boats under construction. 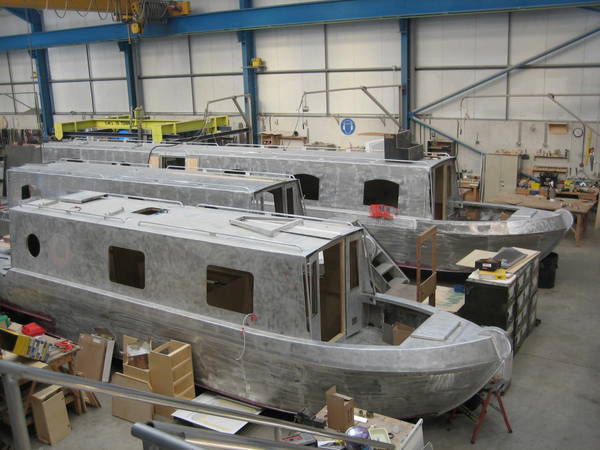 Mine is the furthest away, and before you ask, I haven’t specified a lookout’s bench, that’s just a handy place for Nigel to keep his steps.

When I look at that photograph closely I see that the top hand-rails don’t meet in the middle on any of the boats.  The reason I’m given is that it is so the ropes from the central bollard can pass through the gap.  Couldn’t it just pass under a joined-up rail?  I never see the logic in that !

Today the construction of the tops of the dinette under-seat storage units was nearing completion.

The units will later be raised by about 7 inches when the false floor of the entire “raised pullman dinette” is installed, thus increasing substantially the storage space underneath, including a wine-store under the raised floor between the bench-seats, accessible by raising flaps.

Note the silver-topped box between the two dinette seats, and next to the drill.  This is a rubbish bin which Paul has sourced, and will be fitted under the nearest dinette seat, and will pull out into the corridor, on rollers.  It actually contains TWO fair-sized rubbish bins, a useful concept in these days of recycling.

The cardboard box on the far dinette seat contains a Dimplex fan heater which I had brought with me.  I have asked for it to be fitted in a bow-facing central location in the front of the seat on which it is perched, and will be a backup source of quick heat for the lounge when on shore-power.

Something has appeared in my boat which wasn’t there last visit:-

This beast is a 350 litre (approximately) stainless-steel water-tank and is to be fitted in the similarly-shaped space underneath the bow-deck.  It was pressure-tested after manufacture.  The fill pipe is on the right, and then there are two others close together.  One is the breather (B) and the other Flow (F)

What we can’t see are the strengthening baffle plates within the tank (which also reduce water-surging) and an additional outlet for the water gauge pipe.

One thing I wondered about ever since I read the build specification of a modern Sea Otter Boat…… when everything metal is made of aluminium, why is the water-tank made of stainless steel ?  If you know the answer to this already, I take my hat off to you.  If you don’t here’s a clue to the answer :

Earlier Sea Otter Boats WERE fitted with aluminium water-tanks !  But if the boats were left for a while without being used, sometimes white crystals up to 5mm wide were found in the water-pump inlet filter, and sometimes they built up and completely blocked the pump filter.

Answer.  The crystals were aluminium chloride, produced when Chlorine (introduced into the tank as a constituent of drinking water) reacted with the aluminium that the tank was made from.  So that’s why they changed to stainless steel for the water tank.

Something else has appeared in the bow of my boat.  Just in front of the water-tank you may notice a raised square-shaped aluminium structure.  I’m told this is the lower part of what will be a “coffer-tank”.   I’m not sure what one of those is, but the answer was forthcoming from Paul :-

An aluminium tank designed to hold water will be built up from that frame, to a height of perhaps a foot or so, and inside that tank my bow-thruster will be located.  Whatever the exact measurements are, the top of the tank will be designed to be above the level of the water outside in the canal.  (That’s the clue.)  So, if anything goes wrong with the bow-thruster or the associated seals, causing water to leak, that water will stop flowing by the time it reaches the top of the “coffer-tank”.  In other words, it could save my boat from flooding.

Just before I leave my boat I notice a new flap at the stern.

This is the bilge access point which I mentioned in my last report.  It isn’t very deep, but the aluminium plate below is the base-plate of the boat, and this is the lowest point in the bilge, though as my reader will know, there is a v-shaped hull below that base-plate.

You may notice the black heat-trace wire securely sandwiched between the hot & cold water pipes.

On the way to the office from the boat I’m shown a cooker which is about to be fitted to one of the other new boats.  I’ll be having the same model.  No problem, it ticks all my boxes, such as electric ignition to oven as well as hob, pan storage beneath (thus providing more space in the kitchen cupboards for other things) and a (mirrored) glass top which looks good and provides an additional kitchen work surface when the hob is not in use.

There are samples of seating material laid out in the office.  We quickly choose our favourite (we had a preview of them on out very first visit to Sea Otter Boats) and choose a contrasting coloured material for the curtains from another sample book.

I ask for the seats (for the lounge & dinette seats) to be covered in the chosen material on both sides, so if a stain occurs the seat can simply be turned over.  I also ask for some spare material.

We then visit Paul’s carpet supplier to choose a suitable colour and quality.  We end up NOT choosing a rubber-backed one because we didn’t like any of them, but we’ll be having suitable underlay fitted anyway.

This might sound very obvious, even naïve, but one thing I learned this day was to look at the carpet samples outside !  Some of those that we liked “inside” appeared a totally different colour when viewed in the natural light of day.

On the way in his car we discuss the ventilation of boat cupboards.  I have read that some other boat-builders provide air-grills in all cupboard doors, presumably to avoid condensation & subsequent dampness problems.  Paul tells me that they have never had an issue with dampness in any of their boat cupboards, perhaps due to the care they take with the insulation of the sides & roof & floor areas.  I decide to go with the flow on this, and will only fit them myself later if I experience any problems. [I did and I did ! ]

The first thing I notice is that my water-tank has been re-located to its permanent home under the bow-deck.  The top fill pipe has been connected to the filler cap assembly above.  The breather (“B”) is connected to the outside, and a tap has been added to the outlet (“F” for flow).  And another connection is for the water gauge.

I am impressed with the location of the water level gauge.  I took this photograph from inside the boat, and I’m looking through what will be the portside window in the forward lounge bulkhead.  (The bow door is on my right).  The level is clearly visible from inside the boat, and it is of-course also clearly visible to the person outside filling the tank.

At first I wasn’t so impressed with the position of the water filler cap.  That’s it, covered with masking tape, and in the centre of the photograph.  I expected it to be tucked away in a locker.  Won’t it gather dirt and be difficult to clean off before filling up ?

But when I think about it, whenever I had to gain access to the filler in my previous boat, I had to half empty the locker of its contents first.  And then many-a-time I ended up flooding the locker.  And, as you prepare to fill up, seeing as how you’ve got a water-hose in your hand anyway, it’s an easy enough job to clean any accumulated dirt from around the filler first.  And it is raised up from the surface of the floor to stop bits getting in.  It’s beginning to grow on me.

I had been so pre-occupied with the bow end of the boat that I hadn’t noticed that the floor of the boat was now covered with vinyl / lino.

This prompted us to consider how many layers will be underfoot in my boat !  The answer we come up with is  9 !

Masking tape had been stuck to the lino to mark out the floor-plan.  The two vertical aluminium panels represent the bulkheads either side of the kitchen.  We can make sense of the plan from this photograph up to the kitchen.  The mid-line can be ignored for this purpose.

I was standing in the lounge when I took the photograph.  The nearest horizontal line (as it appears on the photograph) represents where the settees will go up to (one on either side of the lounge).   The space between the first & second horizontal line represents the space required to change the corridor from the starboard side (on the left looking at this photograph) to between the aforementioned settees in the lounge.  (On the portside this space will also allow access to cupboards under the forward dinette seats, and for guests to store their bags)

The space between the next two lines will be the forward seating area of the “Pullman dinette”, the next will be where the table will be, and the next, the far dinette seats.  Then there’s the kitchen area, in which the positions of the kitchen cabinets can be made out.

As you know I’m having carpet up to the gunnels, but those vertical aluminium strenghening box-sections on either side of the boat will not be carpeted, but instead boxed in with wood, which will hopefully contrast quite nicely with the adjacent carpet.

Before I leave Sea Otter Boats today, I’m shown to an upstairs workshop in which my furniture is being made.   This is to be the corner “TV cabinet” in the lounge, and the end of the bed frame just appears on the right of the photograph.   Good quality plywood throughout.  No MDF.

As I leave Paul slips me two free tickets for the Birmingam boat show, and we arrange my next visit for two weeks time.