Continued from part one.

I return to Otter Boats on the 14th of December 2010 by which time some of the previously flat-packed aluminium panels had been joined and bent to produce a semblance of a water craft.  But most of the engineering work done so far had been in the construction of the V-shaped hull, as shown in the following photograph sent to me in the interim period by Anthony:- 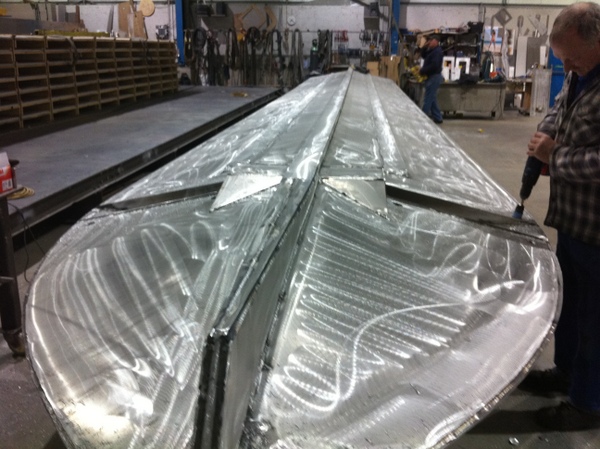 The V-shaped hull, made from 6mm aluminium plate, is designed to allow water in and the water then acts as ballast.  The water enters through holes drilled into it, and completely fills it.  The hollow bow-post at the very front of the boat (doubling up as a “bumper” and on which is fixed the bow-fender) is eventually internally joined to the space in the V-hull.  As the V-hull fills with water, the misplaced air is forced up this tube, where it remains happily under slight pressure for as long as the boat floats.  To stop the water in the V-hull from surging from one end to another, or from side to side during unusual boat movements, there are specially designed baffle plates strategically positioned within it.  No additional ballast is normally required unless there is more weight (furniture, cookers, fridges etc) on either the port or starboard sides, in which case concrete ballast will be added to the opposite side to balance the boat.

Work is being done in the photograph to the cut-outs in the V-hull for the operation of the bow-thruster.

Later the V-hull was turned the right way up, thus exposing the flat 8mm base-plate, and more of the 8mm side-panels are positioned and welded into place, utilising several pre-constructed and temporarily inserted bulkhead-type templates.  These are to be removed later. 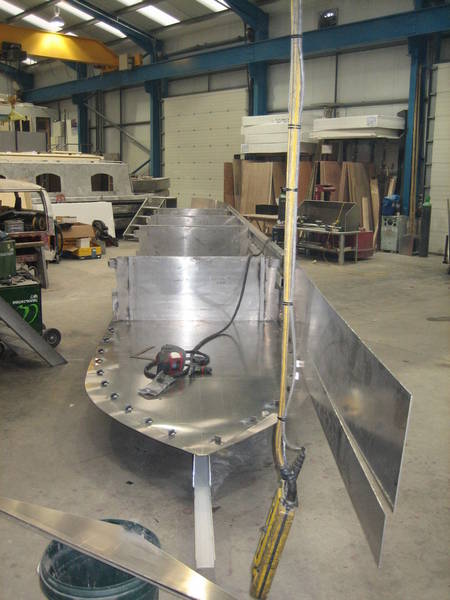 If you look closely you may observe the box channel through which the main electrical cables travel the length of the boat on the starboard side (On the right on this photograph).  Also, at the front of the photograph, lying on top of a bin, is an incomplete baffle plate of the type used within the V-hull, which shows well the shape of that hull.

The next photograph, taken the same day, shows the stage just before the 8mm side-plates are bent round to join the base plate at the stern. 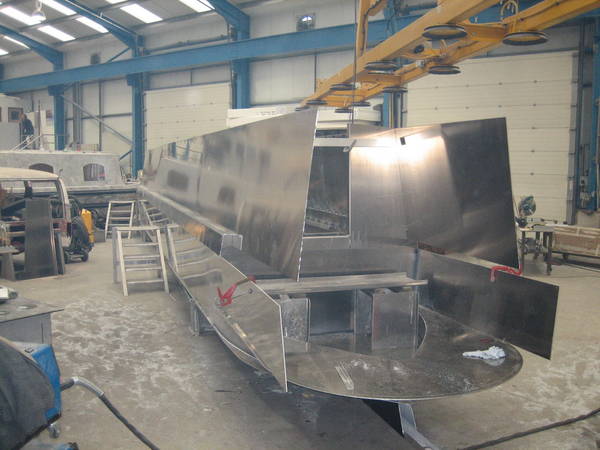 Windows were discussed, and I opt for a nine curved-top-types, with lower-sliding panels.  The maximum number and sizes of windows is dictated by how much strength is removed from cutting out all that aluminium from the side panels, so I don’t get the biggest size available from the supplier’s catalogue. I specify an opening hopper in the curved top so they can be left open in some rainy weather without water ingress.  I choose a non-shiny “coated” finish rather than a shiny aluminium finish as I suspect the latter will show more marks.  I choose larger than normal hopper portholes, one for the bedroom and one for the shower-room, both portside.  The side-hatch will also have curved top glazing, actually one of the standard curved-top windows cut in two.

Anthony printed out the plan of my boat showing the positions & sizes of windows and radiators which I was required to sign, after which those positions are deemed to be “written in stone”.   This new formality follows a recent situation whereby they were asked to change the position of a port-hole after the hole for it had been cut out !  They are determined not to have to do that again. Fair enough.

More decisions had to be made regarding the positions of ceiling, wall, and reading lights, and 240  & 12 volt sockets.  Anthony prints out another boat-plan, and, with a highlighting pen marks on it where they would normally position such things.  I ask if I can keep it for a week, which I do.

I like sockets, and lots of them !  I don’t like plug-adaptors and trailing cables.  I added dozens of sockets to my last boat, both 12v and 240v, to avoid such things.

We discussed loos.  I want to keep the plumbing as minimalistic as possible, specifically to simplify the fitting of trace-heating to the pipes at a later stage.  I would have been content with a porta-potti, but Paul showed me a fitted cassette-loo in another boat being built, and I was converted.  It was a very neat job, it was an integral part of the shower-room rather than a separate entity, and as it was a manual-fill type it did not require pipe-work to it. Best of both worlds as I see it.

I wanted to check what sort of calorifier I was getting.  The type they fit to a boat my size is of 60 litre capacity, made of stainless steel (because they’re less likely to give trouble), with twin coils (one to bring hot water from the engine, and the other to bring hot water from the Webasto diesel heater), and with a fitted immersion heater.  So no problem there.  But they don’t necessarily build the cupboard around it in such a way as to enable the later replacement of the calorifier if necessary, but they promise to work on that !

I finally get to see my boat, and I’m again amazed at how much progress has been made in just one week.  It has gained the full shape of a narrow-boat with both sides welded up.

As Paul talked me through the progress that had been made he mentioned that, because they had never fitted an intercalated (in-line) generator to a Nanni engine, they had decided to fit a second keel-cooling tank just in case additional engine cooling may be required.  And this (when asked) would be at no additional cost.  This is very typical of their “belt & braces” attitude to boat-building, and extremely comforting to me as a Sea Otter Boat buyer.

The construction of the roof was being completed as I watched. The aluminium sheets were being manually bent up to meet the shape of the pre-manufactured curved aluminium box-sections.  They were then clamped together, and then welded together.  So simple, but a lot of thought & pre-planning has obviously gone into the process. 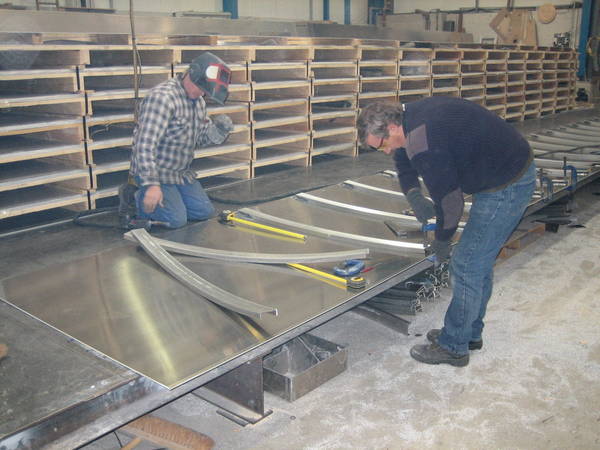 Later that day the roof was turned the right way up utilising those big suckers on the gantry crane, and positioned in place over the boat.  I missed that stage but Anthony sent me a photograph of the action:- 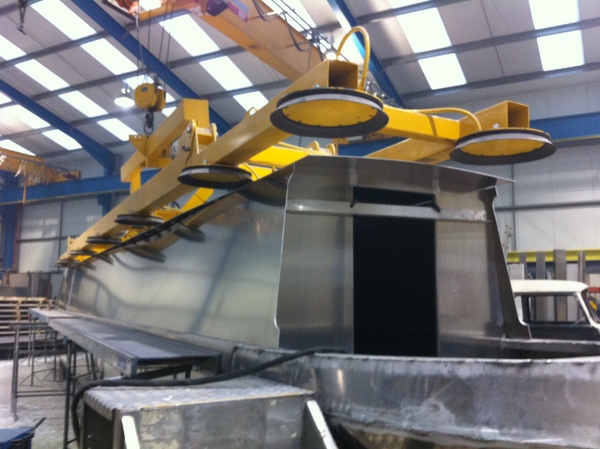 Sea Otter Boats now close for Christmas holidays, and I’ll be back to see more progress in the New Year 2011…….