I woke up this moring to the sound of birds twittering in the trees on the far bank, fish splashing in the water… and the rumble of trains passing on the West Coast Main Line. The trains aren’t close enough to bother us but they do remind us that there’s a real world out there with people enduring the stresses and strains of a normal mid week working day.

The most stress we faced this morning was whether to have toast smeared with honey or free range eggs bought from a farm shop near the marina just before we set sail.

After toast – we eat too many eggs – a couple of cups of coffee and an hour or so working on the site, we set off on the next leg of the journey.

Talking about working on the site, connecting to t’internet has been surprisingly easy so far. A couple of weeks ago I managed to rip my dongle pole off its roof bracket with the centre rope. The dongle is currently wedged in the outside of a roof vent protected from the elements by a surgical glove. It’s not very elegant but I’m going to replace the WiFi setup soon so that I can use a magnetic aerial on the roof. It might not be elegant, but it’s effective. I haven’t yet failed to get a signal where we’ve moored. Maybe that will change but, for now, I’m pleasantly surprised.

We cruised through some beautiful wooded areas just before Brinklow Arches. We passed two giant oaks on opposite sides of the canal. Both had been uprooted and had fallen across th canal. The blockage had been cleared but I wouldn’t have liked being anywhere near them when they came down.

At Rose Narrowboats, just after the swing bridge connecting their two work areas, we stopped to fill up with water, give the two lunatic dogs a run and a toilet break and to enjoy a cup of coffee in the sunshine.

Rose Narrowboats is just feet from the West Coast Main Line yet the canal bank adjacent to to the railway was packed with long term moorers. Why would anyone want to moor there? There are so many beautiful spots to choose from, why moor close enough to a high speed railway line to almost touch the passing trains?

There were more long term moorings just north of Rose Narrowboats. The boat owners here seemed to enjoy noise even more than those at Rose Narrowboats. Not only did they have the very busy railway line to contend with, they also had the constant roar of traffic, day and night, on the nearby M6. What a nightmare!

Maybe it’s just me. I’m very sensitive to artificial noise of any type. Even on my idyllic mooring at Calcutt I can always hear the background noise from the Southam to Daventry road a mile away. That, and the frequent planes and helicopters overhead. One of the few places I’ve ever been able to enjoy 100% natural sounds is backpacking in the Scottish Highlands. Sadly, I can’t take James there so I’ll just try to find the most rural moorings possible.

At Hawkesbury Junction we stopped at the visitor moorings just before the stop lock so that we could have lunch at the Greyhound (and see how other boats negotiated the U turn needed to turn north on the Coventry canal.

What a wonderful place to stop for lunch, and what a delicious lunch. We both had beef and horseradish sandwiches with a side salad and a bowl of chips. The food was exquisite, the weather wonderful and the view fascinating (and I was able to watch half a dozen boats make the turn, some successfully, some not.)

We made the turn successfully, gracefully and, I have to say, with a certain amount of style before heading north towards the entrance to the Ashby canal at Marston junction. I didn’t make the turn into the Ashby canal quite so gracefully. The turn is another acute angle, the entrance to the canal is a narrow bridge hole and the wind was against me. I struggled for a minute or two before I could get the boat’s nose in.

I probably wasn’t quite as proficient as I should have been because I was still throughly confused after passing the ever so eccentric Charity Dock and its collection of mannequins and derelict boats. I should have had my camera with me. I will on the way back.

We stopped after about an hour on the Ashby canal at a pleasant spot near Burton Hastings. We only stopped for two or three minutes. The mooring was exposed and the wind was blowing us off the bank. Just 200m further on though we found a sheltered mooring. It was a suntrap and the perfect place to spend the late afternoon and early evening reading. Our meal was an alfresco platter of garlic stuffed olives, cream cheese filled red peppers, vine ripened tomatoes and thick chunks of whole grain bread and, of course, a bottle of Theakston’s Old Peculiar for me and a bottle of cider for Sally. 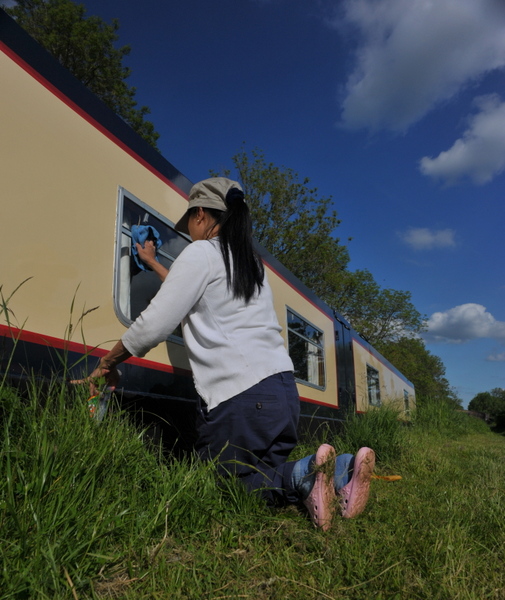 Another day in heaven.

I’m glad you’re enjoying your trip and extremely envious of you!  I don’t begrudge you this idyllic trip as I know you work hard so really deserve such a great break. I’m just envious when I think I’m going to spend 11 1/2 hours in Virgin Atlantic’s cattle class on Thursday night. I’m finally on my way to looking for my new home!

Thanks for your daily updates. They make me realize that I have totally made the right decision to live on a narrowboat!

I’ve just moored at Stoke Golding after another adventurous day. We really are having a good time.

Glad you are having a good time – you certainly picked the right week!