Firstly, a huge thanks and recommendation from us for River Canal Rescue www.rivercanalrescue.co.uk and Anderton Marina www.andertonmarina.com both of whom have been extremely efficient and helpful to us over this past week.

The drama started last Saturday, luckily, just after our last son and his girlfriends holiday had finished with us and they were on their way back home. (I’m not really all that hot on grammar, but the way I’ve written girlfriend(s) makes it sound like he came with a couple of them, but no, he isn’t that lucky, he’s just go the one. Here’s a picture of them and you’ll also see Binks in his safe place whilst on the boat. 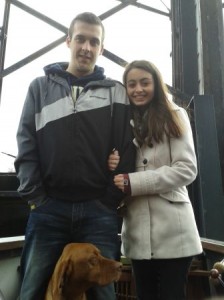 The plan was to have a few quiet days after a busy couple of weeks when KLONK CLANG (sounds like something out of Bat Man doesn’t it.) WALLOP and that was us, we weren’t going anywhere other than with the current. Luckily we were still up on the Trent and MerseyCanal and hadn’t gone down to the River Weaver that we were planning to do a few days later, so we just gently drifted the ten feet or so to the tow path side of the canal.

I thought a running repair would do so popped up to the Chandler’s for some parts, but a few hours later it became apparent that fixing it wasn’t going to happen by my fair hand and we subsequently found out that we’d managed to bend the prop shaft somehow. We contacted River Canal Rescue on the Sunday morning and they were with us a few hours later as the chaps were already on a call. It wasn’t easily fixable, as I’d thought, so they arranged with Anderton Marina to come down to have a look, price up the work that then saw us get into their dry dock.

I haven’t seen many dry docks, so the one atAnderton Marina may not necessarily be unique, but I think it is an excellent idea nonetheless. For want of another word, it’s like a skip with an entrance at one end. Once you’re in they wind up a door, pump out the water, the skip (dry dock) floats and the boat inside is out of the water – SIMPLES 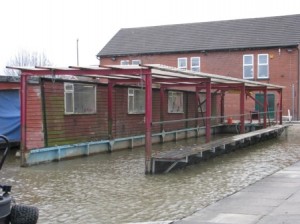 The door at the front 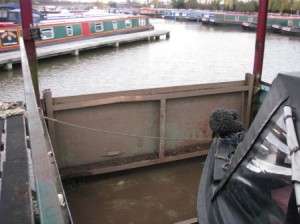 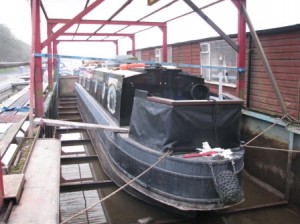 Whilst we weren’t planning to black the boat until next year, we thought we may just as well get it done whilst it was out of the water so at least that’s a job done and sort of cheaper as well as we’ve put the cost of the dry dock against the repair of the prop shaft anyway.

These last eight days or so has also given our solar panels a good test as we haven’t been able to run the engine and haven’t bothered hooking up to a shoreline either so we’ve been living off the sun alone. Not bad when we’ve been pretty much out of any direct sunlight (when there has been sunlight !) and what there has been has been through a Perspex roof.

Should, with should being the operative word, be down on the River Weaver in a few days time and plan to spend the next two or three weeks down there so stay tuned and we’ll let you know how we get on.

(You can view my earlier posts at narrowboatboysontour.blogspot )

Buying A Narrowboat: Tools, Equipment and Security
Buying a Narrowboat: Pre Purchase Tips and Recommendations
Which Are The Best Narrowboat Stern Types For Living Afloat?
A Christmas cruise from Market Harborough to Calcutt Boats
A Christmas Cruise to Market Harborough
All You Need to Know About Narrowboat Toilet Systems
Discover the Answer to the Often Asked Question, “Is A Narrowboat Cold In Winter?”
Why A Narrowboat Centre Line Is So Important For Solo Owners
The Pros and Cons of Narrowboat Pram Covers
A Creative Solution to Narrowboat Finance Part 2
A Creative Solution to Narrowboat Finance Part One
Bottom Blacking, Rust Removal and Aerial Advice
Laughable Lockmates and Mirth in the Mikron Marquee
Horrible Heatwaves and Newbie Cruising Catastrophes
Sid the Swan, Solar Savings and Troublesome Toilets
Buying a Second Hand Narrowboat – Orient, Six Months On
Beware Narrowboat Buyer’s Freebies
Celebrating Shared Experiences And Moving Forward
Cynthia
A Brush With The English Waterway’s Silent Killer
Narrowboat Expenses For March 2019
Broken Boilers and Costly Cratch Covers
Narrowboat Expenses For February 2019
Summer Weather In February On The Grand Union Canal
A Fierce New Guard Dog For Narrowboat Orient
A Race On An Icy Canal To Beat A Birmingham Blockage
Narrowboat Expenses For January 2019
A Winter Cruise On The Shropshire Union Canal
Electrical Problem Solving And Pre Cruise Preparation
Battery Problems On An Aborted Shropshire Union Canal Cruise
A Successful Move Back To The English Inland Waterways Network
Looking Forward To Christmas On The Cut
A Creative Solution To Narrowboat Finance
Five Thousand Reasons To Use A Narrowboat Surveyor
Moisture Misery and Tedious Train Travel
A Welcome Return To Narrowboat Life
From the Atlantic to the Mediterranean in Search of Winter Sun
Île de Ré – A Welcome Alternative to Winter on a Frigid Cruiser
Heating Problems on the Belgian Kempesch Canal
Barmy Brokers and a Belgian Boater’s Generosity