After a very relaxing two days at Sutton Wharf we resumed our snail’s pace cruise yesterday.

We moored at the closest point to the town centre, on the visitor moorings just after bridge 42. Station Road is one of the main roads running into Market Bosworth so there was a fair amount of traffic thundering over the bridge. I made sure that we were far enough away from the bridge to deter the dogs from running onto the road when they jumped off the boat. Daisy is a nightmare. She’ll run for half a mile in any direction when she first gets off the boat so if we’re anywhere near a road bridge we make sure we put her on a lead before she gets off. Charlie (being a man and able to exercise a little more self control) runs around like a lunatic but never more than a boat length away… until yesterday.

Sally let the dogs off the boat while I shut the engine down. Within seconds Sally was hammering frantically on the side of the boat. Charlie had jumped off the boat and sprinted 400m to the road bridge. She knew that he was on the road because she could see that the traffic had come to a standstill.

I sprinted after him and found him shivering with terror but otherwise unharmed in the middle of the road. The drivers of two articulated lorries shouted pleasantries at me as I pulled him off the road and took him back to the boat. Charlie is such a loyal and loving spaniel. I couldn’t bear the look of confusion on his face as both Sally and I shouted at him. I didn’t enjoy being shouted at by the lorry drivers but I will be forever grateful that they were both vigilant enough to stop before they hit him.

Before we set off for Market Bosworth town centre, we chatted to the lady on the boat in front of us.

Her: “It’s a long way to the town centre. You’ll need to get a taxi.”
Me: “Where can we get a taxi from?”
Her: “You can’t. There aren’t any.”
Me: “We’ll have to walk then.”
Her: “It’s too far. Why don’t you try the farm shop at Congerstone?”
Me: “We might try it. If the shop at Congerstone is as good as the farm shop next to the Ashby Canal Centre, it’s certainly worth a visit.”
Her: “I’ve always wanted to visit the Ashby canal. I’ve heard it’s very pretty.”
Me: “We’re on the Ashby canal.”
Her: “No dear. We’re on the Coventry canal. The Ashby canal is much further on. You really must use a map if you don’t know where you are.” 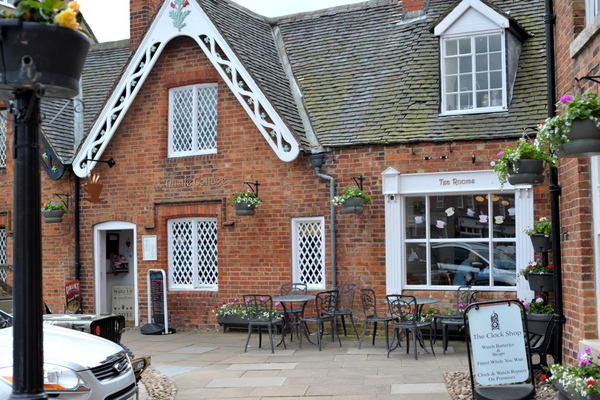 After the trauma of Charlie running onto the road, the conversation was too much for me. We left for the twenty minute pleasant uphill walk to the town centre.

I thought, wrongly, that there was decent size supermarket at Market Bosworth. There isn’t. They have a reasonably stocked Co-op store, a butcher, a greengrocer and chemist a couple of cafes, a restaurant (Sofleys, offering afternoon cream teas for £21 a head – No thank you) and very little else.

The weather yesterday was pleasant enough with no rain, but not quite warm enough to sit at leisure and watch the world go by. We sat in the the Thistle Cottage tea room in the market square for a coffee and a piece of carrot cake before the long trudge downhill back to the boat. 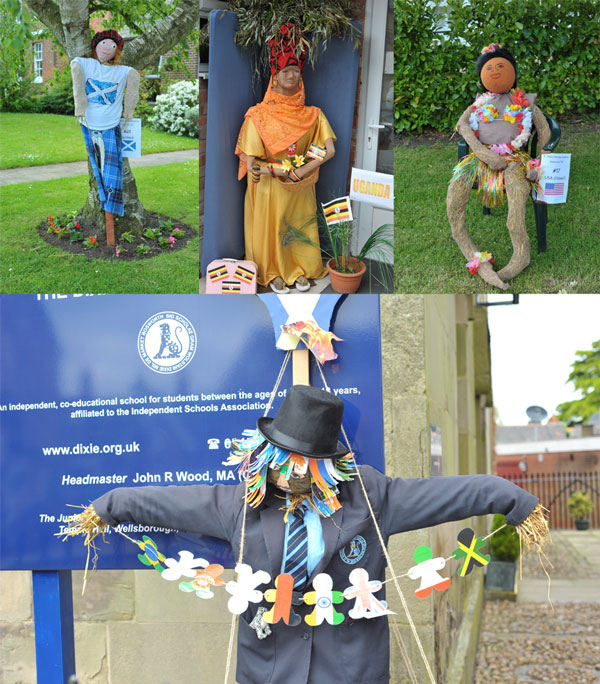 I don’t know what it was about the inhabitants of Market Bosworth, but there seemed to be something not quite right about them. They were a colourful multi cultural lot, but they didn’t have much to say for themselves.

The visitor moorings at Bosworth Wharf aren’t our cup of tea. They’re far too close to a busy main road. We bypassed the congested visitor moorings just after bridge 44 and stopped at a perfect secluded spot just after bridge 46. The north easterly breeze made outdoor relaxing reading a little too unpleasant so we relaxed inside instead before the 7.30pm start of the Britain’s Got Talent final.

As a rule, I try to steer clear of television as much as possible. I would rather read but Sally isn’t quite as keen as I am, and she’s between books at the moment. However, I thoroughly enjoy Britain’s Got Talent (especially the egg throwing antics from one of the orchestra players). We settled down for the evening, me with a bottle of Old Peculiar, Sally with a glass of red, before an early bed and an early rise this morning.

It was a decidedly chilly start to the day. I lit the stove just to take the chill off before the sun comes out later this morning. The boat immediately filled with smoke indicating that the chimney was blocked. This is one of the maintenance jobs which probably needs doing more frequently if the boat is moved on a regular basis. The constant shaking, moving and banging had caused some of the crud which build up on the inside of the flue to shake free and partially block it.

I have a reel of parachute cord in the engine room. It comes in handy for all kinds of tasks on the boat. It was perfect for cleaning the chimney. I found a spare length of fender chain, tied it to the parachute cord and dropped it down the flu from the boat roof. Half a dozen passes up and down cleared the blockage and the smoke from the boat.

We’ve just enjoyed our Sunday morning treat, a full English breakfast. Within the next hour we’ll be off again. We’re only four miles from Snarestone and the end of the Ashby (or the Coventry, as one daft old bat likes to call it). The weather forecast isn’t looking very good for the middle of next week. I think we’ll get a bit closer to Calcutt before we have any particularly rainy days so that we can moor up if the weather is particulalrly unpleasant.

I’m not complaining about the weather. Quite the reverse. We have been extremely lucky. Up until the day we left last Sunday, we had rain nearly every day. Not a drop has fallen on us over the last week and I couldn’t be happier.

I must go now. Four miles to go to Snarestone and the Globe pub. I wonder if Sally fancies a night out?

I liked your story of the ‘daft old bat’.

But, remember we all get gaga eventually!

I don’t think I’m too far behind her at the moment to be honest.

The thing is ‘how would you know?’ maybe you are on the ‘Coventry canal’.

Resolve by the way duly stiiffened, announced plans to best friends, nearly family actually this morning and have some interesting e-mails from Graeme Hawskley about his hybrid drive systems.

I popped into the Globe about an hour ago but the visit was just to use the loo. The garden looked wonderful and the inside of the pub interesting. I’ve heard good things about the Globe, but for this trip we’ll stick to Billy-no-mates secluded moorings.