Do you know how many moving boats we passed yesterday? Go on, take a guess. No, you’re way out. In four hours cruising we saw just one other boat on the move. In four hours cruising along half the length of the Ashby canal in the middle of June there wasn’t another boat cruising apart from us and the one we passed. Of course, we met it on a bend just after a bridge and with boats moored either side.

We made an early start. Early for us on this trip anyway. We set off at 8.30. The day was overcast and rather cool. We lit the stove before breakfast and kept it going for most of the day. I wore a fleece hat and two fleece tops while I was steering. Maybe I would have only needed one top if I had been sensible enough to wear long trousers but my shorts come out of the cupboard in April and stay on until October. I can’t guarantee on the weather letting me know it’s summer so I have to rely on my shorts.

The first village after Gopsall woods is Shackerstone with its idyllic private moorings. I mentioned them in a previous post. I’ve taken a photo or two now though. I’ve added one below. What do you think? 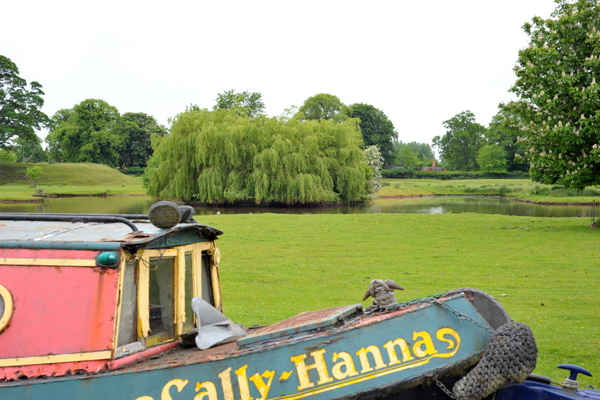 We stopped again at Bosworth Wharf so that we could walk into the town centre for provisions. Sally is lactose intolerant so we only use Arla Lactofree semi skimmed milk. I’m used to the flavour now and it has the advantage of lasting far longer than normal milk. Unfortunately we haven’t been able to buy any since we left Rugby. Yesterday I thought I would try soya milk. I don’t know why. Early signs of senility or a tendency towards masochism maybe. I tried it in coffee when we returned to the boat. Never again. I’m going to feed the rest of the carton to the ducks and take my coffee black until I can buy some decent milk.

From Bosworth Wharf we travelled another hour to Sutton Cheyney wharf and our home for the night. The final leg of the journey had me dribbling all down my fleece top. We bought a chicken in Market Bosworth. Sally cooked as we travelled. The smell of chicken, rice and spices wafted over me as I stood on the back of the boat.

By the time I had tied the boat up for the evening,  a steaming plate of spicy food was waiting for me on the table. I had topped up my supply of Theakston’s Old Peculiar in Market Bosworth’s Co-op so I was a very happy bunny.

We took the dogs for a long walk in Ambion woods after dinner. I wonder if they realise what lucky dogs they are. They usually do very well for walks but over the last week they’ve been able to run alongside the boat with Sally as I’ve cruised towards our new home for the night. I think the smiles on their faces and the sparkle in their eyes says it all.

We woke this morning to light rain. I suppose we shouldn’t complain. It’s the first we’ve seen for nine days. We plan to set off in about an hour for about four hour’s cruising. I’ll have an opportunity to try out my bomb proof Guy Cotten waterproof jacket and trousers.

A Christmas Cruise to Market Harborough