A Day Trip To Braunston

The main problem has been my lack of confidence in the engine. As you’ll know if you’ve been visiting the site on a regular basis, James was in a sorry state when I moved on board. Because I viewed James as a place to live rather than a vehicle to explore the canal and river network with, I spent all of my time, energy and money on making my accommodation watertight, functional and comfortable.

I’ve had a steel cabin fitted over the original 36 year old ply cabin and sandwiched an additional layer of insulation between the two. Then I spent three weeks painting the new cabin and blacking the hull. I’ve had a new cratch cover fitted to create an extra “room” on the front deck. The soft furnishings have been reupholstered, the curtains have been replaced, new oak effect laminate flooring has been fitted to replace the tired and very old beige wafer thin carpet.

I’ve upgraded the electrics. I’ve doubled the battery bank from two to four 135ah batteries and replaced the 110ah starter battery. I’ve added a charger which keeps the batteries topped up when the boat’s plugged in to a land line. I’ve had a 2.1KW Sterling pure sine inverter so that we have 230v power when we’re cruising.

A few weeks ago I finally reached the back of the boat and the engine room. I’ve been told repeatedly that James has a good engine. A very good engine. It’s a 38HP Mercedes OM 636. The trouble is, I haven’t been able to believe these reassurances on the few occasions I’ve taken James out.

Sally and I took Sally’s two grown children, Maricar and Michael, for a cruise to Braunston last Christmas. We enjoyed a bracing cruise to Braunston, moored up, had lunch at the Boat House pub (Two meals for the price of one) and returned to the boat for the journey home. The engine coughed and spluttered into life and then, after a mile, died completely.

I couldn’t get the engine started again so had to walk six miles back to Calcutt to collect my car to bring everyone back to Sally’s house in nearby Woodford Halse. James had to be towed back to Calcutt where my guardian angel, Russ, spent most of the day identifying and fixing the problem.

The problem turned out to be minor. The fuel filter was blocked. Unfortunately, the engine has been installed very close to the bulkhead between the engine room and the bedroom so the fuel filter was very difficult to get to. Fitting a pre-filter is another job to be done.

I was very nervous when I took James out for a while after that, and then I had another problem. The engine wouldn’t stay in gear. I managed to limp back to the mooring with the engine dropping in and out of drive. The problem had been the result of very little oil in the gearbox. One of our engineers topped the oil up for me. The next time I took James out, I had the same problem.

I decided to ask River Canal Rescue to service and assess my engine. They visited me a couple of weeks ago. An expected one hour service took three and a half but, by the end of it, I had far more confidence in the engine and a list of things to put right. One of the items on the list was to replace the perished leads off the gearbox. I had that done a few days later. The lead replacement cured the engine drive problem immediately.

So, with much of the boat renewed, replaced or refurbished, I thought it was high time to get out on the cut again.

On Thursday night as soon as I finished work and a plateful of Sally’s delicious spicy spare ribs (tenderised in the pressure cooker and then finished off in the oven), we set sail.

Sally hasn’t worked a lock before. At 5′ tall and slim, there’s not a lot to her but she was determined that the locks weren’t going to defeat her. After half an hour and much huffing and puffing we surged through the Calcutt flight of three locks, arrived at Napton juntion, turned left towards Braunston and then, because of the late hour, decided to moor almost immediately. 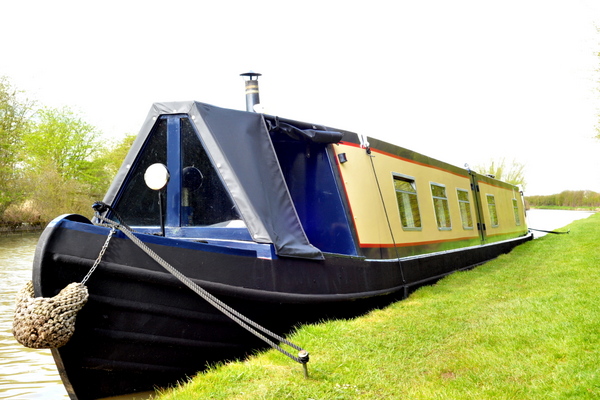 I spent five minutes looking at the damage done in Calcutt Bottom Lock to my broadband dongle roof pole. I had fixed the pole to the roof in order to raise the height of my broadband dongle to help get a better signal. Of course I had forgotten to consider boat handling needs when fitting it. I don’t have fairleads fitted to the boat near where the centre line is fixed to the boat so when attached to a bollard the taught centre rope swept the pole off its fixings. Another expensive lesson learned. I’ll fit fairleads next week. I’ll also have to fit a new dongle pole or invest in a dedicated aerial for my WiFi setup.

It’s wonderful just to be out and about. One of the many marvellous aspects of living on a narrowboat is your ability to change the view from your house windows whenever you please. The view we chose on Thursday evening was of a tranquil canal complete with overhanging trees and a mallard with five brand new chicks. We lit the fire, opened a bottle of red and sat down for an evening of peace and quiet.

On Friday morning we ambled along to Braunston junction. Sally walked part of the way with the dogs. Daisy, our terminally stupid cocker spaniel, only fell into the water once. I don’t know how she does it, but she ends up in the canal at least once a week, and looks shocked every time she does it. 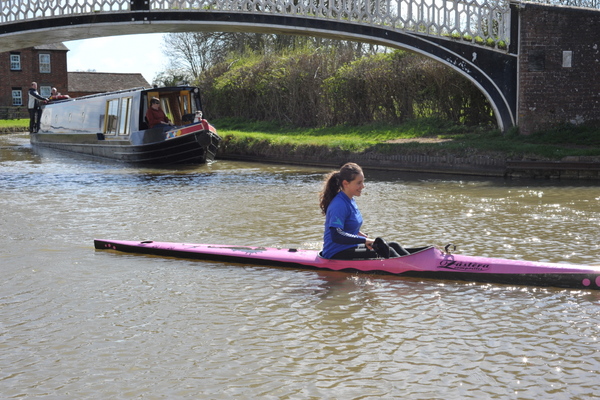 Braunston was very busy. We hadn’t been able to find a place to moor by the time we reached the junction and Midland Chandlers. Their customer mooring was free so we stopped to buy some bits for the boat. They were closed for stock taking. Every cloud has a silver lining though. One of the staff said that, as they were closed, we could stay on their mooring for as long as we pleased.

We popped next door to the Boat House for a slap up lunch. We had a drink, a main course and a sweet each for just under £20. The pub is great value for money and a great spot for sitting with a drink watching boats drift by.

We stayed on Midland Chandler’s mooring for a couple of hours sitting in the sun on the front deck watching the boats go by. We felt as though we were on holiday but we were still at home on our lovely boat.

Unfortunately I had to be back at work on Saturday so the holiday was brief. We set off at 4.30pm for the cruise back to Calcutt and spent the next two and a half hours alternately basking in the sunshine and dodging heavy showers, and allowing for the stiff breeze which plays havoc with a narrowboat’s steering.

We tied up on our mooring at 7pm. The cruise was so different from the previous trips I’ve had out on James. I’ve not had much faith in the engine after a breakdown and an intermittent gear box problem. All of that could have been cured with some fairly simple maintenance. I’ve never been very good with engines which is why I now value RCR’s service so highly. RCR membership and regular servicing is now written in my budget. All my boat needed was a little tender loving care. As Roger Preen – Calcutt Boats owner and James’ previous owner –  said to me, “Do you know, I expect that engine will outlive you!”. I hope he’s right, but I also hope that it’s many years before I find out.

A Christmas Cruise to Market Harborough