A Case Study Of Liveaboard Narrowboat The Watchman

Tony Jones is a freelance writer living on and working full time from his narrowboat “The Watchman”. Tony’s book “The Liveaboard Guide” will be released later this month. The nature of Tony’s work allows him the flexibility to enjoy a nomadic lifestyle that is usually only practical for retirees. I’m just a tiny bit jealous!{{{0}}}

Who are you? (and your significant other and, of course, your dog if you have one)

I’m Tony Jones, I’m 40 years old and I live aboard with my little white terrier dog Puck. My girlfriend lives aboard on her own boat a few metres along the towpath from me. 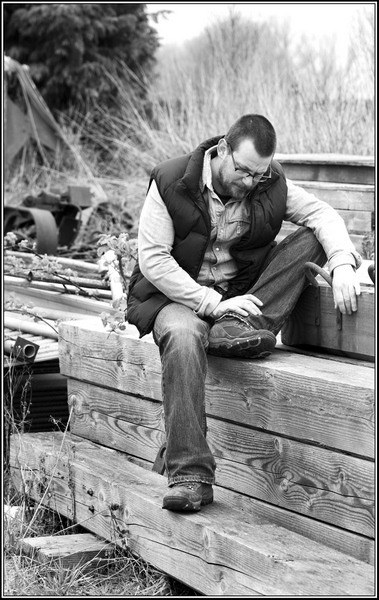 In my spare time I go rock climbing – or rather I should say ‘falling’. I seem to fall more than I climb.

I supposed I stumbled into boating almost by accident. I’d just returned from a stint working abroad and I had a decent chunk of cash in my bank account. I’d been rather itinerant since I left home in my teens and thought that perhaps it was time I settled down and bought a house. After doing some research, however, I deduced that the housing market was on the edge of a precipice and that investing in bricks and mortar at that point was a very bad idea. Admittedly I mistimed my prediction by a few years, but I was eventually proven to be correct in my calculations.

As for buying a boat, it seemingly came out of nowhere. I’d never even stepped aboard one before I handed over my cash. I’d spoken to some friends about it when they considered living aboard a few years earlier, but it still surprises me that I ended up on a boat. saying that, if you spoke to my friends and said that Tony was planning to live in a hot air balloon, they would probably say “Yes, I bet he does as well!”

What is your boat called and why did you decide on that name?

It’s called “The Watchman” although that wasn’t its name when I bought it. It was originally called ‘Saabiar’, which at the time sounded very exotic and grand, like an Arabic warhorse I thought. Turned out that Saabiar stands for Snug As A Bug In A Rug – and I’m not really a snug as a bug in a rug kind of guy. Out came the orbital sander.

The watchman is a song by a dodgy 90’s goth band called ‘Fields of the Nephilim’. There. My secret is out now.

What is your boat length and style?

How long have you been a narrowboat owner?

How did you finance your boat?

As I mentioned above, my life has always been somewhat itinerant. I worked as a roadie for rock bands for a few years, living on tour busses and in hotels and eating at catering. I was earning good money and having very little time or reason to spend any. Then I worked in Lanzarote for a while, helping to set up a zoo over there whilst again, living on site and being catered for. When i came home I had enough money for a house deposit or a boat.

How much time do you spend working on your boat each year?

I live and work aboard so I’m part of the furniture.

Are you still working? (If so, what do you do?)

I’m a freelance writer. I write for magazines such a BBC Wildlife, the Spectator, most of the boating magazines and many more besides. I also write text for museum displays and my first book ‘The Liveaboard Guide’ is due to be published any day now. Its a nots and bolts guide to living afloat, warts and all, and it has lots of anecdotes and case studies and stories too. This helps to give the reader a real
flavour of what boat life is actually like; the lifestyle and the types of people who are suited to it.

Without a doubt it is the amount of time I spend dealing with dog poo that I have picked up on the towpath. Grrrrr!

I thought originally that it would be the financial freedom, or perhaps being close to nature. In reality though it is something I never considered previous to me actually getting a boat. The thing I value most is the boating community; knowing your neighbours and working together like a community should.

If you could change just one thing about your boat, what would it be?

To finally have it professionally painted. It’s been a long time coming, but I think we’re almost there. This year for sure.

When you are cruising how do you resupply (How do you get to the supermarket without a car)?

I’m pretty fit so it’s usually bike or shanks’s pony. I tend to tie it in with walking the dog.

How do you do your washing when you are cruising?

I’m pretty fit so it’s usually bike or shanks’s pony. I tend to tie it in with walking the dog.

How do you connect to the internet when you are on your boat and are you happy with the service you receive?

All of my work is done via the internet, so it is vitally important that I can connect. I have a mobile wi-fi dongle by 3. It’s fantastic.

What is your favourite canal or section of canal?

The River Wey was just stunning. I intend to go back there.

How do you generate electricity when you are cruising and how much do you use?

Power is generated by the engine, inbuilt genny and solar. Depends where we are and what kind of day it is on which source creates the power. How much do we use – again, depends what we are doing. We don’t have a great deal of mod cons – no washing machine, freezer etc. We do have a 12 volt fridge, 6 volt radio and 12 volt tele, so power consumption is quite low. Nevertheless, we still run out of power occasionally. But, there is always bed with a book!

What advice can you offer someone considering living on a narrowboat?

I’m entirely reliant on my engine to charge the three leisure batteries on board. Installing solar power is on the list, behind a paint job. I have 12v adapters for most of my technology and I don’t have a TV or a microwave to suck up power. I run my engine most days.

How warm is your narrowboat in the winter?

Fine, so long as I don’t let the fire go out.

Tony mentioned his soon to be released book in the interview. His publisher kindly sent me a copy to review. You can read my comments here or go straight to his publisher’s web site to order a copy here

Are you one of the lucky few who lives the dream on board your own narrowboat full time? Would you like to share your experience with some of the thousands of potential floating home owners who visit this site? If you can spare the time to answer a few simple questions, I would love to hear from you. Just let me know so I can email the questions to you. I’ll create a post like the one above complete with a link back to your own blog or web site.