David describes himself as MANKY – it’s not as bad as it sounds – who is single and who hasn’t become jaded to the point where he’s reluctant to change his status. Until last month he was in full time employment. Now his options are open. Will he cruise the network full time?

Who are you? (and your significant other and, of course, your dog if you have one)

My name is David and, at the time of writing (Sept 2013), I have neither a significant other or a dog, but am not adverse to having either at some
time in the future. Must like boats! 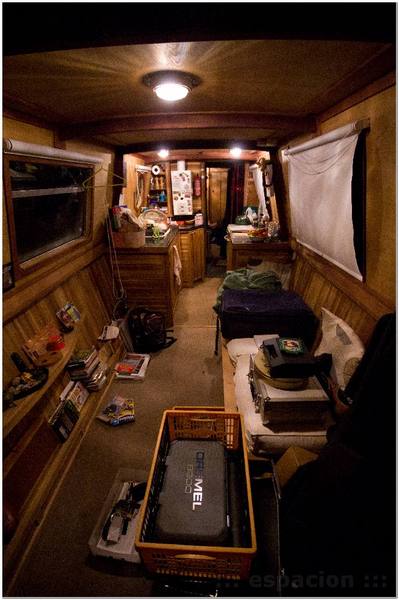 I’m a M.A.N.K.(Y?) – Middle Aged No Kids (Yet?) – and have spent much of my time in creative places. Writing, teaching, adult education, mental health, web design and development, comedy, theatre, theatre production and venue management and photography. I also worked as a courier, delivery driver, telesales and telemarketing and customer services.

For the past ten years I worked in Central London within E-Commerce. Whilst it was great to have a steady income for a change and gain some business experience I found it ultimately a fairly sterile and fulfilling environment.

I first started thinking about living aboard about a couple of years ago. Without wanting to overegg the cliché I had hit a new low, was approaching 50, and the relationship I was in had started to unravel. Sadly, despite both our best efforts, it became painfully obvious that the relationship wasn’t recoverable so I started to look at my choices. In addition to this the phrase ‘Wouldn’t it be a good idea if…’, which had been a regular visitor throughout my life and hardly ever acted upon, had really started to rankle me.

So I eventually had flat, park home, mobile home/van, boat on my list. The flat choice was fairly easy one. I felt it was unlikely I would get a mortgage, did not want to shell out a ridiculous amount on rent and, ultimately, in any circumstance, didn’t want to have to try and find around £1,000/month just to cover the basics.

Park home? The idea still appeals, so maybe when I’m too old and decrepit I’ll look into this more fully, but the places I looked into at the time seemed to be little more than middle aged enclaves and, albeit I fit into that category, I thought they were a little too segregated for my liking.

Mobile home/van? Would have been far too small. I could have gone for a 7.5 tonne truck, but ultimately it felt far too impractical. Parking would have been a nightmare!

Boat? A very good friend of mine had been on the water for about 10 years and had also brought up their child on their boat. She introduced me to someone else who was also living aboard (c.15 years in total and to date 7 years continuous crusing). I spent some time talking to them about it, more time thinking about it, and to cut what is fast becoming a long story short, the boat choice really appealed to me on a practical, material and romantic level.

What is your boat called and why did you decide on that name?

Clay Hamer. It was her name when I bought her and I didn’t change it. It’s rather childish of me, but it kind of sounds like a 70’s/80’s rock band.

Do you have a permanent mooring?

Nope I’m a cc’er. With apologies to those who do have a permanent mooring I really didn’t see the point of having a boat and being static. Kids aside (it makes perfect sense for schooling etc.) I was still able to get into central London for work from pretty much anywhere along the Grand Union (Watford) to the River Lea (Cheshunt).

What is your boat style and length

How long have you been a narrowboat owner?

How did you finance your boat?

Part loan, part cash (from my share of the sale of the flat)

How much time do you spend on your boat each year?

Are you still working? (If so, what do you do?)

I was until I was made redundant in August this year. Now I’m ‘freelance’  and looking at rekindling my photography and web development expertise as well as starting some wood turning.

There’s not really anything that sticks out yet. The lack of space? I still have too much ‘stuff’. Some of the Elsan facilities are less than ideal, but I guess that’s to be expected. The winter? More accurately my inept attempts at lighting, and keeping lit, the fire. As I’ve only been afloat since Feb 2013 and caught the tail end of the winter I guess we’ll see how I get on with my first proper winter and what it throws at me. On land I would start to struggle from around February – lack of light etc – and hanker for the onset of Spring.

Having said that I spent the majority of February though April this year (2013) over on the Grand Union between Packet Boat and Kings Langley and waking up in Cassiobury Park in February and March was absolutely magical. I may have to go back there for a late winter tonic.

I have met some very, very kind, considerate and helpful people. The vast  are boaters, but I am continually surprised by the refreshing nature of the interactions with almost everyone and their abundance of humanity. Friends aside it’s something, in my experience, that’s sadly lacking on land.

If you could change just one thing about your boat, what would it be?

When you are cruising how do you resupply (How do you get to the supermarket without a car)?

I try and use the coal boats as much as possible for coal, gas and wood and local shops for everything else.

How do you do your washing when you are cruising?

Launderette. Whilst I was working I was dropping it off in the morning for a service wash and collecting that evening.

What type of toilet do you have on board and are you happy with it?

Cassette. Happy? Yes. A little medieval, but simple. I’m trying out brewers yeast as the ‘additive’ rather than blue – it was recommended by another boater.

How do you connect to the internet when you are on your boat and are you happy with the service you receive?

Through a Three dongle. 15 gig monthly allowance. The connection can be a little slow sometimes, but is generally more than adequate, but I can burn through the 15 gig quite quickly especially if I’m on a Netflix fix!

What is your favourite canal or section of canal?

My experience is rather limited as I’ve only stopped off at various places between Kings Langley and Cheshunt, but so far it has to be Cassiobury (Grand Union) by a country mile. Absolutely enchanting.

How do you generate electricity when you are cruising and how much do you use?

200w solar panels, cruising and an hour or two just running the engine.

How warm is your narrowboat in the winter?

It was ok when I could keep the fire lit, but my inexperience and ineptitude were big factors earlier in the year and I found myself on more than one occasion just climbing under the duvet. I guess I’ll find out how adept at fire I am during my first proper winter.

What advice can you offer someone considering living on a narrowboat?

DO IT! If you don’t like it you can cross it off your bucket list. The saddest two words would be ‘if only.’

You can read see examples of David’s photography work here.

Are you one of the lucky few who lives the dream on board your own narrowboat full time? Would you like to share your experience with some of the thousands of potential floating home owners who visit this site? If you can spare the time to answer a few simple questions, I would love to hear from you. Just let me know so I can email the questions to you. I’ll create a post like the one above complete with a link back to your own blog or website.

Fifteen Reasons Why Living On A Narrowboat Is A Bad Idea